Psygnosis is a relatively new and not very well known band and that's a shame 'cause those French youngsters have already a lot to offer. I'm not going to repeat myself cause you can read my review of their latest album "Human Be[ing]" here but if you're open-minded and willing to discover a band that joggles different genres, mixes in electronics, samples or even creates music around movie scenes and does it extremely well - do yourself a favor and go through their catalog. I can promise, you won't be disappointed. Rémi - main songwriter sheds some light on what makes this band tick. 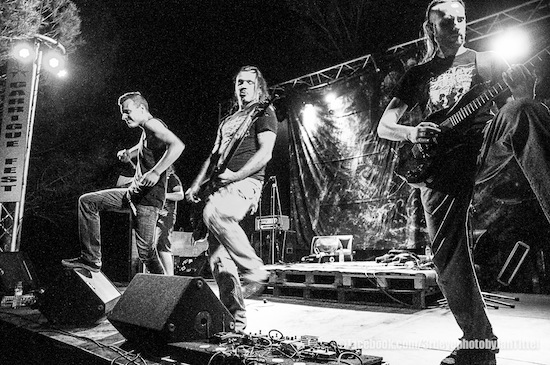 What happened after Sublimation that Human Be[ing] turned out way more aggressive than last EP?

What Happened? Live performance happened! Well not really, I think we can take "Anti-Sublime" as reference. "Sublimation" didn't really add more but one true new song, The Judgement, which is the most violent song that we have ever written. You say more aggressive? I don't totally think so. We've always had violent parts throughout our songs. At least I don't feel more pissed off than two years ago.

Is Euphorya still alive or all ideas are now go to Psygnosis and that's why new album is more aggressive?

Are you guys involved with other projects and if so, is Psygnosis your priority?

Yohan sings and plays guitar in other deathcore band called Behind The Curse, and Anthony similarly plays in other band of punk/rock (weak & fat USA), with friends from Fire Wizzard and Nightmare. On my side - I have many small solo projects that I do for fun, if you're curious to hear that, here is the link: http://mkekchoz.bandcamp.com. But Psygnosis is main priority to all of us, this project is way more important to us than our own professional careers.

As I mentioned your records are quite different from each other, when you write do you have a concept of the whole album?

Yes and no. We don't ask ourselves how it should be done? We start composing 3 or 4 song and then we start to ask questions. What is missing here to make from this recording an album that I really want to listen to? From there we start to find a way to guide the next songs into to their structure and ambience. We also try to find the order for the final playlist. There is no concept, but there is a will of making an album that is coherent and accessible.

You use lots of spoken passages, is cinematography one of your inspirations? Do you write songs around those scenes or is it the other way around?

For "Anti-Sublime" it's true, the samples had a strong influence over the composition. For example, in Phrase 2.11, everything is articulated around the sample from Pulp Fiction. Today it is way less than it was before. Even though when you add a sample to a song it strongly influences the rest of it.  The cinema is an influence without being one. I watch a lot of films. That necessarily has to have consequences over what I do, but it is not tough or on purpose. If the cinema influences the music of Psygnosis beyond the samples, than that comes from unconsciousness.

Was everything on "Human Be[ing]" composed by you or now other members have a part in the process?

I composed the majority of the album, but we've made many arrangements together. Jérémy writes his bass parts. Yohan writes the singed parts and Anthony brings his touch to the guitars. I always create a main idea of the song, but the advice from other members also has an impact on the song. And Raphaël Verguin composes his cello parts in which he intervenes.

How important is lyrical side of Psygnosis? Some of them seem to be very personal…

Yohan speaks of things that can touch us all. The lyrics of "Human Be[ing]" are all articulated around the concept of exceeding yourself, to improve, to become a better human being, to become someone. Those are the personal themes that speak to each one of us. We think like that every day. For ourselves and for Psygnosis, we want to improve without rest and become better persons.

It looks like Psygnosis use music styles without any barriers, but is there anything that you wouldn't try with this band?

Well, there are certain things that we don't want to do. To write music without barriers doesn't mean to try everything just for the performance of it. We want, before anything, to make music that we like regardless the style or genre.  And it's especially about that, the goal is not to do the most atypical or more experimental music. I definitely don't want to do that. I just want to make a music that I would love to listen to, and I listen to a lot of different things. If I had to make the music that I want to make while staying within the alignments of each genre, I would take part in 15 different groups. I'd rather have one single group where I can play everything that I want, without having to tell me: "No, that won't stick", or "it's not supposed to be like that".

Composing 10 minutes songs is not an easy task, how do you go about the composing process? Some of them go through many emotions so I can't imagine writing them in one sitting.

It's very weird. But something it's very difficult for me to make short songs.  I very often have a feeling of underachievement when I finish at 4 or 5 minutes. It's like if I couldn't take the song farther away. That it could be better crafted and richer. So sometimes I can finish a song in a single journey. Other times the composition spreads trough many years. Like "Lost in Oblivion" which suffered many changes. There is no formula for me.

With such overflow of music ideas, your inspirations must come from multiple sources and definitely not all metal related. Can you share some of your biggest influences?

Very difficult to hide it, I'm a big fan of bands like Hypn5e, Gojira, Deftones and Meshuggah, as well of artists like Aphex Twin or Autechre for the electronic fringe.  Right now I'm diving into the music of Hecq and Access to Arasaka, and it will definitely have an impact on what I'm working on right now. The ambient parts are very influenced by the trance from the 98's to 2002's. Like the sort of things that would come out from Bonzai Records, for example. The melodies of Push and Body-Shock continue to have a lot of impact over those that I developed. My desire of creating loops comes equally from this whole scene (like in FIIIX 2.0 or the end of Resurrection).

If you could do a perfect live show, what visuals would you use to complement your music?

We have a lot of ideas for developing our visual aspect on stage. I'd rather keep the surprise for the future, but we are not inspired at all from what is being done in the metal scene. We are rather drawn by the electronic scene, where they really don't have any limits at the visual level and lighting. Very innovative things. Do not expect something traditional.

Why is it that your material is only distributed digitally? I'm sure many fans would like to have a hard copy?

That's not true. Our album "Anti-Sublime" and "Human Be[ing]" are both available in CD digipack version! "Sublimation" has been edited to USB Key format, limited to 100 copies. We have just a few left. The only exception was our first EP "Phrases", but we don't think it's necessary to print it. We prefer to look forward rather than getting out old stuff, maybe in the future if there is a demand and we can afford it, but it's definitely out of the question right now. Don't count on that at the moment.

You also produce, record and self-release your music. Is this your choice or you haven't found a record label that will meet your demands?

We have been very selective in our search for a record label. We've tried more than ten times and any attempt or exchange was successful. It is not that bad after all. We have a total freedom towards our way of making music and sharing it. We were just blocked with the promotion, because we were unable to do it ourselves since we all have lives that are very tuck. That's why we collaborate with Dooweet Promotions, who are doing an excellent job for us! But nothing is permanent and we don't know of what tomorrow is made of.