<"Pelagial" was without a doubt one of the best albums of 2013 and any metal fan should see The Ocean perform live to see the full spectrum of band's abilities, passion for music and professionalism. After one of those shows I had a chance to get in touch with Loic to ask a few questions about his instrument, and Robin added his 2 cents explaining the concept of the album with last 3 questions. 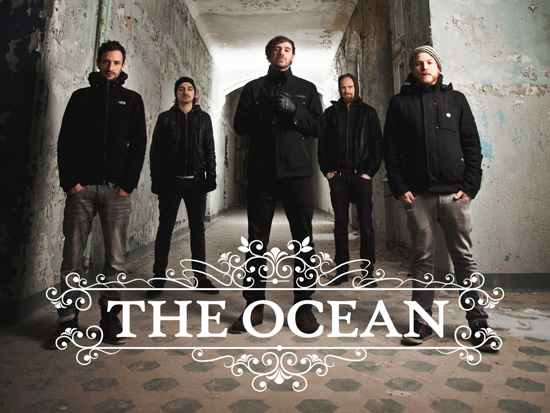 Even-though originally the album was written as instrumental you bring a lot to the table and your vocals complete the concept perfectly. I'm just curious what would you do if "Pelagial" was released as instrumental only? Stay home and do other things (like what?) or go with band on tour and sell merchandise?

First of all thank you for your comment. It's quite difficult to answer this question. I honestly think I would have stayed at home in Switzerland where I would have continued to work as a sound engineer in my little recording studio. I couldn't have been on tour and do the merch and not be able to sing. It seems weird to do that.

Your vocals either bring another level of intensity or calm the waters if needed. How do you decide when and what style of vocals to use?

What I love the most with my instrument is the ability to go in any direction. I like spontaneity, I think only that can deliver something honest. So in general I do not have to make this kind of decision. Rather it is a natural process, such as at time to feel a sung part would be more appropriate and more effective than some screams. I come from the rock scene and singing is really important and even crucial for me. I feel more in harmony with myself. I feel that the screams sometimes requires much more energy, disappointment or rage, that I do not necessarily always have.

It looks like you can go from clean to screams and back with ease and with perfect pitch. Does it take a lot of training or you simply were born with this talent? Do you try to push yourself to next level on each release, try new things?

[Laughs] Well, thank you very much. Note that I'm not so sure regarding the perfect pitch [laughs]. I honestly don't do much exercises for my voice. It's been more than 15 years that I've been singing. I learned singing by going to my rehearsals and trying to sing the songs of my favorite artists just because I thought it was cool. I think this is the best exercise. Keeping a natural process you don't need to ask yourself the question. What does that mean "the next level"? It is not you who decides if the album will sell or not. I often have no idea about my voice before returning to the studio. Don't force your destiny and try to do things as they come, live the present moment without asking yourself too many questions. The important thing is to be consistent with yourself, that's how I see things in my case.

On the stage with each performance you give 110% effort - how difficult is this on your vocal cords and your overall health? I know you had some problems even before the tour started…

It is true that I had some issues with my voice. In the same time when you're doing more than 120 shows a year you should expect to have some difficulties at the end. A lot of people are still thinking that life on tour is easy, but often these people do not realize the actual conditions of a ride. They are often exacting, the lack of sleep, the long hours of traveling, eating infected food on highways and if you want to add some alcohol it will not make things easier. After one or two month of touring , you can really feel your body fall to shreds. We must learn to calm down even if it is not always obvious and easy.

Do you take special care of your instrument? How do you keep it in perfect shape? Egg yolks or plain whisky just does the trick?

There's no magic secret. The most important thing for me is to have a nice night of  sleep, which does not happen very often on tour. Sleep is really important and repairer for me. Then, if you have a healthy lifestyle and you eat decently it will help. About the whiskey, a glass five minutes before the show and an another one during  show. It works perfectly.

How hard was to write lyrics to a concept about descending into the ocean? You can't write/sing about fish,… well you can, but I don't think it would fit.

That's why the album was initially incepted as an instrumental album. For a long time I didn't really know how to approach this, the concept behind the album did not seem to allow for vocals or lyrics… the only way to do this was to approach it was to open up a parallel universe: one being the journey from the surface to the bottom of the sea, and one being a journey from the surface into the abyss of the human mind. Once this was clear, writing the lyrics was smooth sailing. It's always like that, you're fishing for the right idea, trying out a few things, and then at one point it eventually clicks and everything falls into place naturally.

"Pelagial" was meant to be one track on record and live. For live performance, how difficult is to cut parts of 'one' song when you can't play the whole set?

It sucks. That's what we had to on the Summer Slaughter tour we did in the US here, we had a 25 minutes set, so we could only play excerpts of the record, and it didn't really make sense, as the set always either started or ended in the middle of nowhere. It is possible to cut out certain bits, for example it works well to play the entire album minus 'Absyssopelagic II: Signals Of Anxiety' and 'Hadopelagic I: Omen Of The Deep'. That reduces the set from 54 to 45 minutes, and I feel like this still works well. But less than that is hard to do.

It looks like concepts are the main thread of band's career, why this form?

I would not say that. The Ocean is meant to be an audio-visual experience, both on record and live, and though most of our albums follow a certain conceptual thread, this is only one aspect of the big whole… the music first and foremost, but also the visuals, the lighting, the album artwork and the lyrics all play together to create this holistic experience. Personally, I have always been intrigued by albums that were "real" albums, rather than a random collection of loose tracks. When I like a band, it's great when you realize that there is some thought behind the lyrics, the packaging and the way a band presents their art both on and off stage. That's what makes artists like Tool, Nine Inch Nails or Neurosis unique and outstanding, and that's what has inspired my own approach to art and music over the years.