With two CD's and two EP's under their belt, Destroyer 666 is quickly becoming a more established act amongst not only the Aussie metal scene, but also elsewhere. Their new album, "Cold Steel..." is an epic slab of death/thrash metal. I talked with Shrapnel about his thoughts on the new album, Australia, and lots of other things surrounding the band... 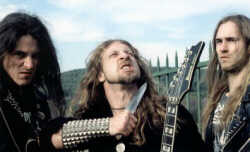 First off, I really enjoy the new album! I just want to congratulate you on it.

So, where do you think this new album is leading the band? Is it a progression since "Phoenix Rising" or just continuing on with the same idea?

Well I think that the new album is a much better release than our previous release. Whether it's a new direction or not, I can't really say. We are a band that doesn't really make a focused decision on what music we write. It just happens. We are all a lot happier with how the production turned out this time round. It sounds very real and raw, which is something I think the "Phoenix" album lacked.

Are you happy with the final product?

Yeah, the final product is a ripper. It's a kick to the face to all 'nice ' metal out there these days! The songs are easily the best we've written and the playing is also a few notches up.

Do you think that after two albums and two EP's that the band is being a little held back because of their origin of Australia? It seems to me that many great Australian bands are rarely recognized.

Actually this album is number 4 for Destroyer 666. "Violence is the Prince of this World" is the first & "Unchain the Wolves" is the second both thru Modern Invasion Music. But, back to the question. Yeah, coming from Australia makes it harder to get your music heard, it's just so fucking far from everywhere. The scene in OZ is a fucking great one, though with many killer bands, which is growing very rapidly. There is also quite a large following of the Aussie scene throughout the world, much similar to the Brazilian and Canadian scenes. So, slowly us damn Aussies are getting some attention. The last year Destroyer 666 moved to Holland, giving us the chance to attack the European scene. This was fucking great for us. We were able to do two European tours and a stack of metal festivals, not to mention the mighty Wacken Open Air, which was just fucking amazing. I think in reality if bands want to really get noticed they have to tour Europe, Rebellion and Destroyer are good examples of this.

What do you think of the metal scene in Australia right now?

Well I haven't been there for the last year, but I do know that there are some bloody amazing bands coming up. Gospel Of The Horns have a new album out on Invictus which kicks ass. Astriaal has a new one coming soon. Same with Atomizer. The mighty Sadistik Exekution with their killer album "Fuk". Destructor are now releasing brutal shit as well as the raw as hell Vomitor. So lots of stuff is happening in a scene that's is rapidly growing. 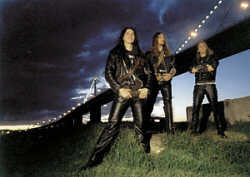 When I listen to Destroyer 666, I get a few different ideas of whom your influences are. To me, it often feels like you're influenced by Bathory. I think it shows in the atmosphere of the music, particularly. Is this assumption correct, and who are your influences?

We all listen to lots of metal, whether it's heavy metal, black, death, speed, thrash or whatever. We draw on everything for inspiration. I think a big problem with a lot of today's music is that many people who write a certain style of metal, only really listen to that style that they are creating, thus ending up with an album that just sounds like 50 other bands. Having some individual qualities is something that makes music stand out from the rest. I think we have managed to achieve that on our albums. As for Bathory being an influence, of course, who isn't influenced by such a fucking classic band!?

With all the music that comes from Destroyer 666 and the influences and everything, what would you classify the band as? I hear the term 'war metal' tossed around quite a bit, but I'm interested in the band's view on things.

I think Destroyer 666 could be put under all sorts of styles, that's what gives us our own. 'War metal' is typical of a lot of Aussie bands, but somehow I think Abominator and Bestial Warlust take that flag.

I've wondered whom the main songwriter for the band is. Is it a process handled by one individual or is it more of a group effort?

We all write songs for Destroyer 666, but KK writes the majority. We work as a band with structuring so there is very much a band effort on all the songs. All of the leads are written by me, and majority of the melodies are also. S. Beserker does all the bass lines and helps out with beats with Chris Mersus (Battery). Destroyer 666 is very much a group effort.

So how is Seasons of the Mist? How many more albums do you have with them, and do you think you'll stick with them after your contract runs out?

Season of the Mist has done a great job for us with everything except their Graphics Department. Oh fuck what a mess they made out of the "Cold Steel..." album layout. Wrong shit, crappy photo (which doesn't even have our drummer on it), they changed the fonts, left stuff out, etc. So the only problems we have had is with that side of things. I suggest that everyone buy the vinyl version with the correct layout. It looks far superior. As for whether we will sign with them again, I don't know. We'll have to see. 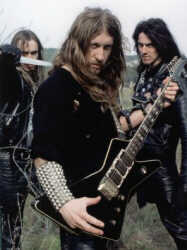 How has the new bassist S. Beserker done with filling the job previously done by Bullet Eater?

S. Beserker has done a fucking great job. He had big boots to fill but covered it no fucking problems. He's a maniac, who can drink like a bloody madman and thrash just as crazy. Metal to the fucking bone!

I must ask, what is the reasoning behind the band name? Does it have to do with the bands beliefs or is it just something the band felt like using for the hell of it?

KK came up with the name before I joined the band. I think if you hear Destroyer 666 you can tell why he adopted the name. Brutal fucking onslaught.

That's all I have to ask you today. Any last comments?

Thanks for the interview. Hail the new Dawn!