Unfortunately, because of the wave of nu-metal tunes washing over the world like a unprecedented tidal wave, Remembering Never may not get the time of day that they clearly deserve. "She Looks So Good In Red" scored very well at Metalbite.com (8 out of 10) and hopefully a few more people around the world will take a peek at what lurks in the dark worlds of hardcore and metal. Lead vocalist, Pete takes some time out to answer my questions, briefly. 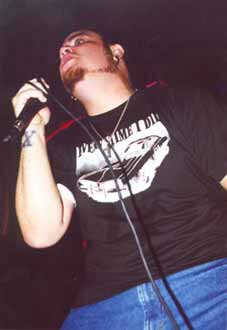 The genre of music that Remembering Never plays in (whatever that may be), where do you see it going in the next three to five years? Can you see an effective merger with heavy metal? You guys are pretty heavy, and "She Looks So Good In Red" is certainly one of the more heavy releases I have heard from Ferret. Do you mind being lumped in with metal?

We all listen to metal so that's the biggest influence. The first few bands I ever heard were Judas Priest, Motley Crue, Iron Maiden and so on. I was in love from then on. Now with (I regret to say) "metal core" the possibilities are endless...

First things first, I have to say that "She Looks So Good In Red" is a phenomenal album. How have the press and fans reacted to this new material from you guys?

Thanks, surprisingly with a new singer and a bit heavier sound everyone was totally down for the record. All the reviews I've read for the record have been really positive.

What is the idea behind this new album? Was there an objective you wanted to achieve for "She Looks So Good In Red"? I mean lyrically some of the concepts come across as very depressing, suicidal almost. 'Alisons Song' for instance isn't the most heartwarming of tracks. As you read further and further through the lyrics this seems to be an album written about break-ups and divorces; some very personal sounding stuff.

Well, I was very pressed for time with most of the songs because our singer quit 3 months before hand, and I was listening to a lot of that kind of stuff so it was pretty easy to write about. I was really angry at the time and it came out in song.

Again on the topics of lyrics, would Remembering Never be Remembering Never if the lyrics were piss-weak? Even if you had super-cool riffs, song structures. Whatever, would you still put out an album if the lyrics weren't quite there? You guys seem to hammer home each song on "She Looks So Good In Red" with powerful and meaningful lyrics, of course this is a great thing as heaps of bands just write up rubbish and expect it to be an award winning concept. I guess what I am trying to ask is whether lyrics form an integral part of the Remembering Never experience?

Ok, fair enough. My lyrics will never be "piss-weak". I say what I want without worrying about consequence. If I felt that the lyrics don't portray what I am saying, I'll change them until they do. The more recent songs have a lot more subject matter, but the end result is people dying because they deserve to.

We did that song as a joke. It was on our first record and we sold it as a demo in south Florida when we recorded it. It is a rotten song and we thought it would be funny to throw it together. We really never finished it, so it sounds all chopped up.

'Last Night Alone' certainly has a different vibe to the rest of the material on "She Looks So Good In Red". Almost all of the tracks on "She Looks So Good In Red" are combination of in your face harsh elements and more mellow touches. 'Last Night Alone' seems a bit different here. Is it just me or was there a deliberate attempt to go elsewhere with this song?

This song is about me killing myself. Slow. It was a moment of weakness. That will never happen again.

Ferret has opened many doors for us just because of the name. We really didn't expect to sell as many records as we did until we started touring.

You guys have got a few comparisons to Poison The Well with your debut MDC. One thing I noticed and found slightly perplexing is that you have got Jeremy Staska to produce and record "She Looks So Good In Red" when Jeremy also has done some work with Poison The Well. Surely this will earn more comparisons, does it phase you guys drawing alongside Poison The Well in this respect, particularly taking into account Jeremy working the album?

Jeremy records most of the bands from south Florida. For the next album there is a good chance we'll be going with James Wisner (Underoath, Dashboard Confessional, Glasseater). Poison The Well is a great band, but it takes away from the bands who get that comparison in any way. I don't want people to listen to us and say "oh, that's another Poison The Well band", because we are so much more than that. It so easy to write off any band that sings and screams even though its been going on for years before Poison The Well was even a band. No one realizes that.

How did you and the rest of the Remembering Never gang come together? Was it the typical "we ran into each other at the local pub and started talking and the rest is history" scenario, or something a bit more unusual?

Some of us were in another band that just kind of fell out. Basically it's just a bunch of friends bringing the rock.

Speaking again of the rest of the band, do any of them participate in side bands or is Remembering Never a side project for them?

You were a part of Until The End, doing vocals. Did they disband after you left or what?

No, we are still together and we are recording our new CD in October.

On the press sheet is listed Remembering Never as to be touring all Summer. Are you going to go out later in the year to support "She Looks So Good In Red" further?

Yes. We are going out in October/November up the East Coast and Canada. A few shows with Shai Hulud and Atreyu.

What is special about a Remembering Never live gig? What can you guys offer that some of your contemporaries can't offer on a live set?

Your clean vocals are very distinct, do you have any particular inspiration for them?

I don't really have any inspiration for singing but my favorite singers are Mike Patton, Elvis, Daryl from Glassjaw, Chino from Deftones, Glenn Danzig, Henry Rollins, R. Kelly, and Marilyn Manson.

The growl/roar from you in "She Looks So Good In Red" is very metal. Do you listen to much metal?

Yes, but I listen to a lot of other types of music also. I listen to lots of oldies, early 90's grunge, 80's metal, thrash metal, hip hop, etc, etc. Lately I don't listen to as much metal due to all the more recent stuff sounding too alike.

Well Pete, thanks for the time with answering these questions for myself and Metalbite.com! Have a killer time with Remembering Never and try to come and do some touring in Australia sometime, I'll be there for sure!

Thanks so much. Keep it gay.