With only their second release, Italy's Ephel Duath is storming the heavy music scene with one of the most interesting releases of 2003, "The Painters Palette." After completely rearranging the original line-up of the band, the mastermind behind Ephel Duath, Davide Tiso, put together an impressive roster of talented musicians with diverse influences. The product is an ambitious piece of work that has received extremely positive reviews all across the board, making Lee Barret and Elitist Records, a label known for signing bands that are doing something different, very proud. In light of their most recent success, "The Painters Palette," main man Davide Tiso took the time to answer the questions I had about such an interesting band. 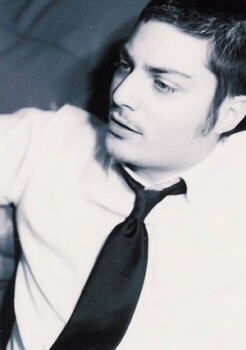 I must say that I'm very impressed with "The Painters Palette." You guys did an amazing job with it and it's one of the best and most interesting releases of the year.

Thanks a lot for your kind words...

For those who are not familiar with the concept of music and colors that you have tied into "The Painters Palette," could you explain what it means and how this idea came about?

"The Painter's Palette" tries to be a sublimation of the free interpretations. The colours are, in my opinion, a perfect way to symbolize this desire. Have you ever noticed how many various and curious effects have the view of the same colour on different sensibilities? During the compositions I fused our music with pigments and, to fully expose myself, I have reported it in the titles, but not to guide: this is the reason for the white & black artwork. So, the nine rays of the colour that you are searching in our composition will try to hit you. Absorb them with the largest perceptions possible, and you will complete the sense of our work.

The line-up of Ephel Duath is very peculiar. Considering that you're the founding member and the only remaining member from your debut, "Phormula," and that all the members just sort of fell into place, Ephel Duath seems to have a much more professional relationship with each other than you guys do personally. How does this play into the music?

Our relationship is really professional when we have to play together, but we are also very close for a lot of different aspects of our personal lives. The professional attitude that we have playing together without doubt helps us during the composition. Our material is really hard to be faced, so for this reason we need to follow clear and detailed plans, and only this type of approach could help us.

If you pay attention to the reviews and features that have been done on Ephel Duath, a lot of praise has been given to drummer Davide Piovesan. Having been from the jazz scene, does he find it odd working with an avant-garde metal band with screaming vocals?

After the first period of adaptation he immediately entered into my musical conception. There have been some problems during the compositions, due to the fact that I'm not so able to "explain" my guitar lines, but his great determination has been fundamental to solve this. Ephel Duath represents an important challenge for him, and for this reason too he's trying to put all his energies in this project. He seems to be really trusting for our future...

What about the other members? Can you tell us a bit about each of them?

After the "Rephormula" release I started to compose new material with great determination. In few months I had written the guitars and the structures for six songs and eventually recorded the new compositions in a small studio in my city. The sound engineer said to me that a typical metal drummer would be a disaster on material that is as hugely varying as my material, so he gave me the contacts of Davide Piovesan. I was in a very difficult period, crushed between the will to be bold and the fear of not being supported by our label for a such an audacious choice, but I have followed my instinct and in few weeks I was in studio with this crazy forty seven year old drummer and a friend of his, a double bass player. Unfortunately in a few weeks the bassist left the band for his various projects, but his help had been fundamental. I understood that this was the right way to create something new. In a few days we found another great bass player, Fabio Fecchio, and the rhythmic section was done! He's probably the most technical musician in the band. He's a great perfectionist and he puts a lot of enthusiasm in our work. Moreover, on stage he's a great certainty. 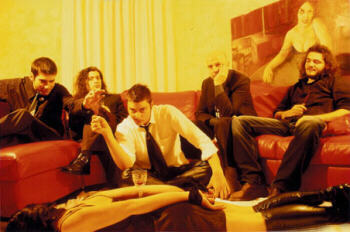 Finding the right singers has been quite difficult. For the screamer we did a sort of audition and Lucio Lorusso George, with his typical hardcore background, has been a great surprise. His approach is really violent and full of impact and during a simple check in our small studio he has been gripping and convincing, as if we were doing a real concert. With the months he's entered more and more in the band's spirit and now he's become a great front man.

Davide Tolomei, the clean vocalist, is an old friend of mine. He has the passion of rock, grunge and avant-garde music. I listened to him singing a song by Tool during a party and I invited him to try to put some vocal parts in my new material. You can listen the final result in the album. So, I've chosen the new band's members following my instinct and I've to admit that I've been repaid by the others with their great performances on "The Painter's Palette," and with their great professionalism.

Being from Italy, what effect has this had on the success of the band?

Unfortunately, till now, being from Italy could be considered a disadvantage for our band. I don't think that Italian bands have a particularly good reputation in the other's countries, especially England and the USA. I hope that in future the situation will change because we have great bands here that are distributed in a lot of different genres. I suggest you, in particular, the works of Void of Silence, an apocalyptical doom band, and Aborym, a cyber black metal band.

These are some of the names that I respect. I don't know if they could be considered an influence but I usually listen to stuff like Robert Fripp, Steve Von Till, Mike Patton, Mikael Akerfeldt, Ulver, Manes, Cult of Luna, Red Harvest, Diabolicum and Void of Silence above all.

I'm curious as to where the name Ephel Duath came from and what it means. Can you give us any insight into this?

Ephel Duath comes from Tolkien's mythology and it means "Mountains of Shadows." We have chosen this name for the mysterious sound that these two words create together and for the great ties that we have with this master.

There is a distinct jazz feel to the Ephel Duath songs, particularly a song such as 'Praha.' Seeing as you're the composer of the material, I was wondering if you listen to jazz music or if it just made its way in there somehow.

It could appear curious but I'm not a listener of Jazz. This genre could be considered an unconscious influence that has been emphasized by the support of our new rhythmic session, which has a strong jazz background.

How do you think you have grown as a composer and musician since "Phormula"? Is there anything in particular that you worked on improving?

I think I'm more open minded since the "Phormula" period. Moreover I'm really more self-confident and determined, and for these reasons I think I am a better musician. Now I'm the unique composer with four other people working and following my choices, so I have to offer them clearness and resolution, and this is so exciting!

If you had to say there was a weakest aspect of Ephel Duath, what would you say it is? What about the strongest?

The weakest aspect of Ephel Duath could be considered the mental challenge that our music requires; the strongest could be our ambition and obstinacy. 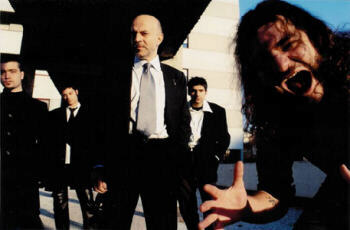 Do you consider Ephel Duath original? What kind of goals is the band trying to achieve with the music?

I consider Ephel Duath a pure and clear transposition in music of what I feel. I don't know if it could be considered original but it's without doubt spontaneous and fresh.

We want to bring Ephel Duath a higher professional status and this is our goal. It would be really important to live with the earnings of the band.

On the promo it says, "'The Painter's Palette' is destined to be recognized as a genre-defining, groundbreaking monument in years to come." I understand you weren't the one to claim this, but what do you think about a statement as bold as this one? Elitist seems to be right behind you guys all the way.

Usually the words that are present in a bio have an excessive attitude, trying to present the band through only its positive aspects. Our bio is undoubtedly one of the most exaggerated presentations that I've ever read. It's quite embarrassing for me, even if it's represents all the trust that our label and our management have in our possibilities.

What is next for Ephel Duath?

Now Ephel Duath is also a live band and I'm so proud of it! We are working hard to become a good live band and we are trying to overwork all the opportunities offered to us. We are playing "The Painter's Palette" in our live show, and the response of the public is really positive. They are usually really still but they seem to appreciate and understand our music, including those that haven't listened to us on CD. Our songs in a live dimension are a little bit more direct and minimal. Also, we have adapted some parts to a live dimension thanks to new arrangements. It's a new and important perspective to absorb our music, and I love it.

At the moment there isn't a tour planned, but there are good possibilities to play around Europe during the summer and autumn. At the moment we are playing here in Italy supporting important bands like Entombed or Lacuna Coil, the 24th of June we played at the Upstairs @ The Garage in London with Mistress and Desolation and the 5th of July we took part in the Quart Festival in Norway with bands like Massive Attack, Queens of The Stone Age, Red Harvest, Cult Of Luna and many others. The 8th of August we'll play at the Brutal Assault Festival in Czech Republic, featuring Malevolent Creation, Hollentron and many others.

Moreover, we have composed two new songs, 'Imploding' and 'New Disorder.' They seem to be more powerful, thick and with a touch of seventies in the sound. They have something like a stoner appeal. We hope to record a new album at the beginning of 2004.

That's all the questions I have for you. I appreciate your time. Do you have any thing you'd like to say?

Thanks a lot for the support. For other information or to download videos and music visit www.ephelduath.net.