Started out as teenagers just enjoying their instruments, brewskis, occassional gigs in people's basements. Now, Dead For Days from the suburbs of Chicago are a band that is gaining more and more respect and attention throughout the Metal scene. One of the original founders, Zack - who also happens to be the one turning many of the wheels behind the band, sits down with us to get interrogated. Interrogation performed with sick pleasure by Tom. 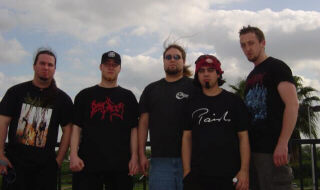 Thanks for taking the time to do this. First of all - for all those that don't know you yet - who is Dead For Days? What can you tell me about you guys that we would not find on your MySpace profile?

We are a death metal band, from the suburbs of Chicago, formed about 8 years ago, we started out just like many bands playing in a garage, went through some lineup changes and some real bullshit (for all of you in a band you know what i'm talking about). We lost our bass player and founder of the band early in the life of the band then known as In Pieces (I don't know why we even picked that name), That really brought us down (he overdosed on heroin) and we didn't know what to do, but decided to get our shit together and started jamming again, and finally got some real following going.

From what I gathered, your vocalist Potty quit due to personal reasons. Can you tell me though, what the hell is going on with your bass players? Is it the physical or the mental abuse that they cannot bear?

If something it would be the mental abuse! We do joke around a lot with each other, but that's not the case with our bass players. Don't get me wrong they do get a lot of shit distributed equally throughout the band, they just weren't working out or had better things to do.

You started out as "In Pieces" - what made you change the name? And why did you pick "Dead For Days"?

It turned out that some new metal band (ew!) had a name like that in Connecticut, so we had to change it. Our bassist at the time used the name Dead For Days for his production studio so we just stole it from him (thanks Manny). If we really wanted to keep In Pieces we could have just waited, new metal bands don't have a long life expectancy!!! We all like Dead For Days much better!!

How would you describe your writing process? Do you actually meet in the practice room, or rather exchange files on-line, like many of the bands do nowadays?

Seriously I didn't know that people actually share files online as a form of a writing process, that's weird. We do it the old school way, go to practice and write, which is the best thing to do, cuz how do you interact with your bandmates about a riff you don't like!? Conference call!? That's to business for us. we usually meet, somebody comes up with some cool riff and we all get to fight about how many times we play it and how to put it in the song, good times!!!

Correct me if I'm wrong - you have 2 vocalists now. How did this come to happen, who is it, and how is it working out so far?

Yes we do have 2 singers right now, Matt who also plays guitar, and James Eads, who used to sing for Rellik, and Worms Inside. We could not be happier, that duo destroys everything. James has so much energy on the stage that I swear to god that he smokes crack or something. And it gives everybody an extra kick on the behind to perform better and put on a better show.

It's been quite a few years since your first release. What changes, if any, can we expect on the new album - is it very different from the first one?

I don't see a real big difference in music, its just better, the vocals are different but just as powerful.

What are the plans for the promotion of the newest album that is due soon? Have you discussed any tours, etc.? What is your strategy and where would you like to get with the new release?

We would like to tour Europe, so if anybody is reading this that can hook us up, give as a call. So far we have a couple of shows booked locally and some shows in New Mexico and Texas, as much as we like to play out of state and do tours not all of us are able to drop everything and go on the road, that's where reality kicks in with stupid bills, stupid jobs and shit like that! We realize that playing shows is the best way to promote ourselfs and we are trying our best to do so.

How did the recording session for the new album go? Are you 100% satisfied with the final outcome?

Oh man it was such a good time! There were times when we wanted to strangle each other but thats normal, overall we are very satisfied with it.

I can't help but notice the interesting graphics - on both CD and the promo apparel. Do you do this yourselves, or have you acquired someone else's help with your artwork?

Thanks I did most of them myself, except for the new cover which was done by Scott Creekmore, I was gonna design something myself, but we all liked his design sooo much that we kept it. We are gonna try to realease more tshirts as I have ton's of designs just waiting to be printed. The new cd is coming so now is a good time.

Since you mentoned the new CD coming out, can you tell us more about it? Where was it recorded and with whom behind the knobs; who is going to put it out, and most importantly, when does it hit the streets? Where can we get it?

The cd was recorded by Gino Scarim (good guy, i recommend) at his Duckphone Records studio, and Mastered by Manny Conchola (from Enjoy the Massacre, also a good guy I recommend his band) We just sent it out to be pressed and it should be released soon by Epitomite Records I can't wait!!

Now, from a different angle - a few years back, you had a project going on with Maurizio from Kataklysm - whatever happened to that? Do you guys still jam together?

Oh, man that was such a good time, I got to jam with Maurizio from my favorite band. Unfortunately he is a busy guy and so is everybody from the band and we had to put a stop to it, we had a couple of songs written but nothing recorded. Very cool guy though! He knows how to write songs I tell you that.

Thanks for your time, it's been fun. Any last words for MetalBite readers?

Uhm, yeah, ha ha, just keep supporting metal, keep supporting your local bands - they're the ones that are trying really hard to do something, even though sometimes it may not be much. Thanks, man.

See you at the next show!