Perseverance. It seems that Calm Hatchery's body of work should be encompassed by that one word. Huzar is one tough cookie and after numerous line-up changes, relocations, ups and downs and a couple-year-long hiatus, he brings Calm Hatchery back. Sacrilege of Humanity is unquestionably one of the best Death Metal releases of 2010. It came out a while back, so, naturally - we had questions. He had answers. Read on. Questions courtesy of Arek, translations by Monika. 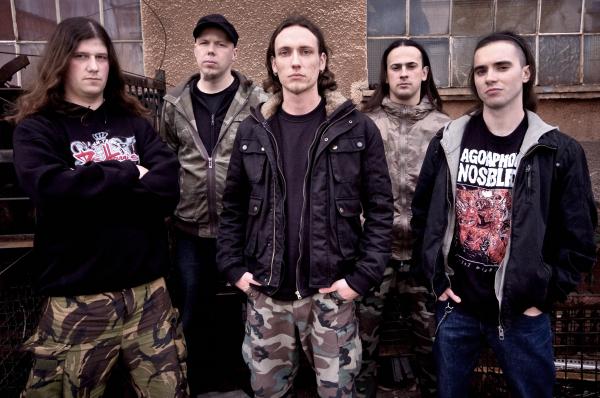 Greetings, Peter. You've been around since 2002? tell us what has changed in Calm Hatchery after Nov. 15, 2010 ? the release of Sacrilege Of Humanity?

Hauzer: Hello, Arek. First, I need to explain something. The premiere of the album took place on 20th of December, 2010. Indeed, it was supposed to originally come out in November, but due to some reasons beyond our control, there was a monthly delay. You've asked what has changed?..hmmmm, nothing really, ha ha! But seriously: because of Selfmadegod, we had an interview in Metal Hammer (issue # 1, 2011), and now in Teraz Rock (Polish, issue # 2, 2010). There was also a short note about it in Terrorizer. Many reviews have appeared all over the place, in Poland and overseas. Karol has also taken great care with distribution of our CD. You can even buy it through Relapse Records! We've had a couple of invites for concerts. You know, after the premiere of the album there is really no great chaos, no sudden jump to the top, but definitely, thanks to the premiere, many more people have found out about the existence of a little band like Calm Hatchery.

I think that S.O.H. is an awesome album, and I fully stand behind saying that thanks to it, you are a "discovery" in Polish metal for 2010. How is the feedback you're receiving?

Hauzer: Thanks for the compliment. It's great to hear that someone likes our scribbles, that someone actually commits 33 minutes of their life to listen to our CD. However, we do know that this is not some super-excellent album. We know and feel that we can record a better album and we'll do everything in our might to go the extra step next time. As for reviews - there are various ones. No band has ever made an album that would make everyone 100% happy. There will always be different opinions, what matters is how many are positive vs. how many are negative. The worst thing would be if there were no opinions at all. And this is the thing about our album - opinions vary, but from what I've heard, they are mostly positive.

How do you assess your correlation, relations and journey from Via Nocturna to Selfmadegod Rec.?

Hauzer: I have said many times in the past that Karol and his Selfmadegod are a trustworthy label. Karol treated us very well. He came through with all his commitments. He overcame our expectations when it comes to promoting the album and everything. He is a solid and reliable guy and we're extremely happy that it was him that released our CD. When we get enough material for a new release, it is possible that it will be under the label of Selfmadegod. You know, comparing Via Nocturna and Selfmadegod really makes no sense; itss a completely different category. Of course, no offense to Via Nocturna, it's just about financial abilities, behind the scenes, promotion, etc. Via Nocturna is a small label, we're very happy that El-Alamien was released by them. It's a fantastic place to start, to make a debut, but if you want to go forward with more albums, you need to reach higher.

From El Alamein to Sacrilege Of Humanity there was a noteworthy step forward, and although it is not yet fully-bloodied death metal, it seems that those 4 years of work and personal changes worked to your advantage. How do you see this?

Hauzer: Yeah, definitely, all of the personal changes and the whole chaos with the band worked for us! The basis is your faith in what you do. You cannot approach music from the materialistic point of view and from the get-go care only about profits. Unfortunately, the previous line-up had exactly that problem. Despite the fact that they were awesome musicians, they did not follow through with their actions - we all know that if you want to achieve something, you need to sacrifice yourself and not pay attention to any of life's obstacles. I have always believed in what I do and for me and my friends, music is the most important thing in our lives. It is still death metal, but we are constantly searching, exploring. We don't want to be a typical death metal band. We are always looking for ourselves in music, sort of looking for our identities. What we're really like. Music is honesty, atmosphere, emotions!!! That's most important. We like the idea of extreme, but it doesn't have to be "extreme" death metal down the road. We have many albums to go to get to what I'm talking about...live and see.

Whose imagination shaped "Sacrilege Of Humanity", and who is the lyrics' creator?

Hauzer: Songs from "Sacrilege Of Humanity" were mostly put together by me. Of course, I don't want to portray myself as an autocrat, I don't want my bandmates to hold that against me. Definitely, "Sacrilege Of Humanity" would not sound the way it does had it not been for their part in composing. They sort of helped me "close the gate" and give the album the final touches, complete the design. We kind of work together, but I think I have the major part, and I take care of the character and styling of the band. Unfortunately, it is also I that am responsible for most of the lyrics. I am not a master of penmanship, but the pictures in my head are so vivid and suggestive, that I would not be able to rest until I poured my thoughts out onto paper; although, I did mention before, I sometimes have a problem with transferring my visions onto paper, because they often go into the indescribable category. On the new album, a friend of mine from back in the day helped us out and wrote lyrics for 2 songs - completing the whole thing. 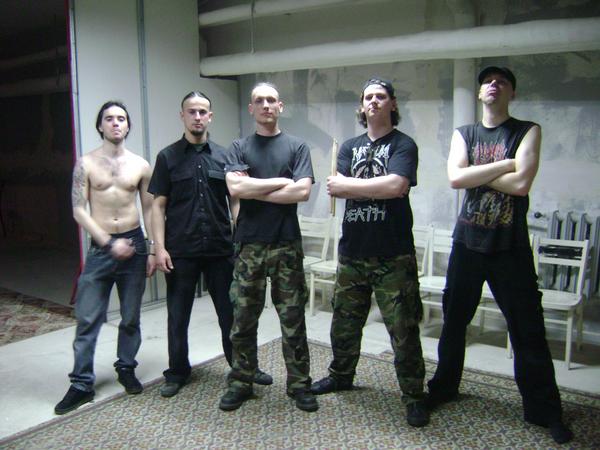 In my humble opinion, Nile's achievements had quite an impression on your newer creation. I am not saying that you're going backwards or copying anyone, quite the opposite - I think that you may have taken a tiny piece of Nile's character and were able to implant it into Calm Hatchery's body of work. What do you think of my opinion?

Hauzer: I totally agree with you. I am very happy that you took it this way. We love Nile and we don't hide the fact that they inspire us. It's a great band that has noticeably broadened the musical horizons in extreme metal, so why not do what the best do? There would be no development in arts had it not been for the predecessors. Therefore, looking up and being inspired by someone is not a bad thing, many bands started off like that - only to eventually find their own specific style.

You've traveled all over Poland, started in the Bialystok-area depths of death grind, only to end up in Slupsk - what caused all those voyages?

Hauzer: All this is because of me, ha ha ha. Originally, I come from the seaside (north). I went to college to Bialystok. There it was where I met friends from what became Calm Hatchery. I finished college and needed to make a decision on what to do next. On top of this, final diploma work collided with personal problems. Friends have stopped believing in playing this kind of music, although I cherish the memories of the beginning with them. I decided to go back home. For a moment, the band was "suspended". But I was constantly getting great reviews about El-Alamien and I even got an invite to play at a concert in Malbork. So I decided that maybe it was a good idea to get back to working, under the same name. It was hard to find good musicians and put together a good lineup - that took me over 3 years - and it is like that now.

Have you had a chance to get in touch with labels from other countries so that Calm Hatchery's creativity could also infect other nations with their death metal virus?

Hauzer: We're constantly on the lookout for good contacts. It's hard to get through between thousands of other bands, and then get noticed. We're sending our promos out all the time. We'll see in the near future if our efforts were worth the time. Recently, thanks to Piotr from Defense Merch, we played in Krakow and Wroclaw, as support for Anaal Natrakh - maybe we'll be going back to the south of Poland in the fall. Time will tell.

Hauzer: World would be boring if all countries were the same in that way, so I think the "collar" actually stimulates. At least, many bands have something to sing about. Right there's a positive, hahaha! Personally, I do not believe in any institutions, and I think that media, politicians, and any other institution-representing people, who supposedly "heal our souls"- are all false and hypocrites, but we both know that. It's better to concentrate on discovering oneself rather than worry about some stupid crap - it's a waste of LIFE.

It's been only (or already) 6 months since the release of the last CD - do you have any ideas/sketches for the new material?

Hauzer: Yes, first ideas are already here. We have almost completed the first piece for the new album, and we're working on the following ones. But we still need time for the album to fully mature to have it go to the studio. Nevertheless, in the near future, we will add a brand new song to our setlist. For the time being though, we need to calm down and work on this stuff.

Thanks for the interview and we're awaiting the new masterpiece from Calm Hatchery. Greetings.

Hauzer: Thanks for the interview Arek. Sorry it took so long, but I hope what we've talked about makes up for the delay. Hail to you and to all the fans of EXTREME MUSIC!!!