Behold the new masters of darkness! SEPTICFLESH kindly invite you to join "The Great Mass". The Greeks' seventh full length is a new symphonic masterpiece that constitutes a quantum leap in the art of amalgamating orchestral music with Heavy Metal. These songs are audible evidence of guitarist Christos Antoniou finishing his studies of classical composition with academic honours and distinction. On April 18th of 2011 (US release April 19th) "The Great Mass" will be unleashed onto an expecting world. With the aid of the instrumentalist and choir of the Filmharmonic Orchestra of Prague as well as the massive sound created by renowned Swedish producer Peter Tägtgren (IMMORTAL, HYPOCRISY), SEPTICFLESH are about to achieve immortality with their highly original and very cinematic dark musical matter at the edge of Black, Death and Gothic Metal. Join their cult in the rite of "The Great Mass"! Guitarist/Vocalist Sotiris and Compositionist Christos were kind enough to sit and answer some questions for me about their latest album! 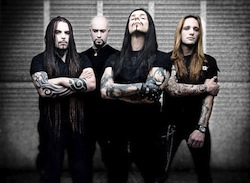 Thank you so much for taking the time to do this interview with us. How are you doing?

Christos Antoniou: I am fine but working nonstop with the promotion of the album and various other projects outside my Septicflesh world in music fortunately. But no complaints I am really pleased about it.

Can you give our readers an idea of how you guys got together and Septicflesh came to be?

Sotiris Anunnaki V: I wanted to form a Death Metal band and I was searching for other members. So I had an appointment to test a drummer that wanted to join me. As he was a friend of Chris and Seth, they allowed him to use the drums of their rehearsing place, in order to show me his skills. I tried to play a couple of songs with him, but I wasn't impressed at the end. On the other hand, Seth that was watching this rehearsal liked my style and told me about his band Septicflesh. So instead of finding a drummer, I ended up joining Septicflesh. Soon after we started working on our first demo?

The new album comes out on April 19th, what are you expecting people's reactions to be like?

Sotiris Anunnaki V: Just before last Christmas, we released a single called The Vampire from Nazareth to give a glimpse of the music of The Great Mass to the audience. The feedback was fantastic and there is a lot of enthusiasm right now about the forthcoming release. So probably the reaction will be good. We shall witness very soon the reaction to The Great Mass.

How would you compare this to previous albums?

Christos Antoniou: We wanted to focus more on the extreme element of our music and try some radical ideas. The songs turned out to be more brutal and dark than in the past, especially in comparison with Revolution DNA. We experimented also, more with the choir, adding a mystical touch to the sound. So, indeed we opened quite a few fields for experimentation. When we came back from the dead, we decided to step more boldly to this direction, to explore deeper this "new found world" and expand our horizon. And vital role that orchestra plays in our albums especially from >b>Communion and more with The Great Mass. The Orchestra is the foundation of our ideas and is where we have built our music. Its unconventional use also emphasizes how important tool is in our disposal.

There is so much involved on this album, I love it, it's symphonic, it's dark, it's theatrical. There are so many aspects to it; you have to listen to it several times just to get a a slight concept of what went into it.

Sotiris Anunnaki V: Indeed. There are a lot of musical layers on the compositions of The Great Mass. It is an outburst of ideas and intense emotions. We decided to experiment more on the development our symphonic element and our orchestrations in general, approaching an almost cinematic result. It is music that can create a lot of bizarre images for the mind's eye. And the more one listens to the album, the more he can penetrate its shadowy world. We want to give to the audience a good reason to return and listen to the album again and again.

Did you use the same orchestra as you did with Communion? What about Natalie Rassoulis? Did you use her again for the female vocals?

Christos Antoniou: Yes is the same Orchestra. We are really pleased from their professionalism, interpretation in our music and fill all our demands. There is no reason to end a successful cooperation. Nearly 150 people involved for this project. Imagine I was listening and supervising the recordings from my studio in Athens. They have a big perfectionist team in order the session to run smoothly otherwise you could end losing thousand of euros if everything is not perfect. Although it is early to say that it is in our plans to continue with them and after The Great Mass. Natalie's decision was to be apart from metal or Chaostar (the band we had together) due her personal reasons. We respect that, Androniki (Chaostar) and Iliana (Meden Agan) are the female singers in the album.

Can you give us an idea of the thinking behind this album? Your influences, etcetera. Your sound and this album is so dynamic that I want to give our readers an idea of how you bring the thought of something like this into reality and how much work goes into it.

Sotiris Anunnaki V: As you can guess, we worked very hard to bring The Great Mass to life. Actually more that 150 of musicians were used as besides the FILMharmonic Orchestra and Choir of Prague, we used a boy soprano, two different female vocalists and some strange ethnic instruments. We have reached to a point that besides the ordinary guitar oriented way of starting a song idea, we can also start a composition by using symphonic parts as its backbone. This opens a wider range of possibilities for the rhythm section, the vocals and the guitar work. We are definitely an extreme band and besides the atmosphere it is important for us to tear your flesh to shreds, with heavy and sharp riffing. I must also point out, that all four members of the band are contributing songs. So there was a big pool of ideas to begin with. Fortunately, after all those years together, we have learned how to collaborate more efficiently, in order to create something dynamic but also solid.

What were some of your favorite moments on this album?

Christos Antoniou: On Oceans of Grey the part that builds towards refrain is one of my favourite. With this part we were "shocked" from the result with the orchestra and the operatic vocals. It was really difficult for me to orchestrate this part as it has this ostinato (repetitive) melody accompanied by 2 only chords. I made many orchestrations for that and I ended in a solution to add and other melodies from the song and it worked really well. The colors of the orchestra and the dramatic voice of Iliana (coloratoura soprano) stand probably as the best moment of The Great Mass. The end of Vampire is also unique for me. The blend of Sotiris vox the ethnic instrument (yahli tambur) and the interpretation of Androniki are also in my favourites. The great mass refrain and the middle percussive part on 5 pointed Star is in my daily listening.

Musically, who have been your influences over the years?

Sotiris Anunnaki V: Our influences come from a lot of different musical styles, as we are listening to all kinds of Metal, to gothic rock and also to classical and soundtrack music. There is a big diversity between my favorite bands as I enjoy listening for example, from Iron Maiden to Dead Can Dance.

Just for those who don?t know the history of Septicflesh, what led your break-up in 2003 and also your reuniting in 2007?

Christos Antoniou: It was a difficult decision that we had to take. I had to go and work in England as a composer for a game, Seth also was really busy with his artworks. Also the bad financial situation of our label Hammerheart played a vital role and all of these made us to split up the band. There was no other way. We respect our art we respect our fans and all our albums I believe have something to say, to express to make the listener feel strong emotions and experiencing our dreams and nightmares. This is the aim of our creation.

What do you think have been some of your greatest musical achievements over the years?

Sotiris Anunnaki V: We are proud about our artistic course. With each album we managed to push our boundaries, while keeping alive the essence of our musical identity. I believe that The Great Mass is our biggest achievement so far.

After the release of this album, what is on the agenda for Septicflesh?

Christos Antoniou: We will play as much as we can. Till now we have 2 festivals in France one we will be headliners and the other will play along with Epica and Dagoba. On May is our headline tour in France for 11 shows and June we have the Hellfest again in France. End of june and for a month we will tour in US/Canada with big package but I can?t say anything more for that. From September we will tour again in Europe and of course we will start our Greek shows. We have many offers and we have to plan a carefully what is best for the band.

Any words for your fans out there?

Christos Antoniou: I would like to thank them for all their loyal support all these years. I am sure they we will be excited about The Great Mass.