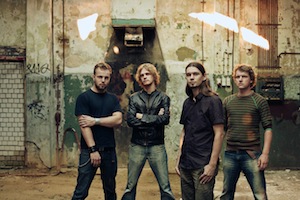 Thank you for taking the time to answer a few questions for MetalBite.com. How are things with Tank86 nowadays?

You're welcome, thanks for having us. TANK86 is doing pretty good. The dust of the release of "Rise" is starting to settle and now we're just gigging a lot. Good times.

Can you tell us more about Rising Magma Festival-turned-label? Are there any Rising Pains that may come with really self-promoting your own band and your own label - by yourself?

The Rising Magma festival started with the release of our previous EP "Behold" in 2008. For the release party of the EP we teamed up with a couple of like-minded bands with the idea to help out each other in playing gigs and getting promotion. This quickly grew out to a network of bands that organised gigs under the Rising Magma banner. It's really an effectively shared DIY concept: everyone sharing their own network to make a bigger network. With the release of "Rise" we turned Rising Magma into a record label with more or less the same idea. Rising Magma Records has worldwide digital and physical distribution for it's bands to make use of. What Rising Magma wants in return is not a lot of money, but a good dose of hard work from the bands in promoting and booking themselves and other Rising Magma bands. As for rising pains, it's always hard to start up things for yourself. It's just a lot of work and it really takes time and effort to get things where you want. The upside of it all of course is that you take all the credits for yourself and have full artistic control. Those are very valuable things.

What bands are on the Rising Magma Records roster? Do you have any favorites-anyone you can recommend?

Rise is the first physical release of the Record label. We'll be releasing a 7" Split LP with Belgian doomsters SardoniS in a few months. Those guys are awesomely heavy and heavily awesome, check 'em out. While you're at it, check out Pendejo as well. Heavy stoner grooves with Spanish lyrics and trumpets.

Tell us about the artwork of Rise. Comparing it to the Behold cover - is there a common ground to the graphics behind Tank86?

There's definitely a common ground with the Behold EP. The Behold EP also features a statue on the cover and we thought this worked very well to capture the atmosphere of TANK86, so we continued in the same direction on "Rise". A statue can be very very powerful without using any words and this is obviously very fitting for our music. Our music is powerful without any literal meaning, there's a lot of room for interpretation. We made a concept for the artwork ourselves and Alexander von Wieding from Germany did an awesome job in styling it up and making it look awesome.

I was going to ask about that - is this an actual part of a building? Where does it come from?

Yes it is. It's a Gargoyle from a cathedral in Florence, Italy. The Behold cover is a statue somewhere in Romania.

What is the meaning of the name TANK86?

We get that question a lot. The 86 seems to conjure up hidden references to obscure books or other mysterious things. We actually like it that way, so let's keep that going...

How was Rise received throughout the metal scene? Have you noticed any differences in feedback between Netherlands, remaining Europe and the rest of the world?

We're very happy with the reception of the album. Apart from a few grudging hippies complaining it was "too much metal", the reviews have been overwhelmingly positive worldwide. We're glad most people seem to "get" the album. We've put in a lot of effort in the writing and recording of it and it's good to see that it's paying off.

Album sounds and looks great. Is the digipack edition limited? What formats did it come out on?

We've pressed 2000 copies of the digipack and we're planning a vinyl release somewhere next year. Apart from that it is available digitally through iTunes, Spotify, Bandcamp and the like. For people wanting to buy the Digipack, they should be able to order it worldwide at their favorite record store. It's probably the cheapest through TANK86's own webstore on our website though.

Do you guys meet for rehearsals or do you send mp3's to each other? What is the creating process you guys go through?

We all live in cities pretty close together and we have our own rehearsal space right in between. We always rehearse there two nights a week. At the rehearsal space we don't do a lot of writing, but more the finishing touches on songs and rehearsing them for shows and recordings. We've been builing up a small studio there as well so we can record stuff pretty well on our own these days. As for pure writing, we mostly send mp3's to each other that we record at home. Once stuff is finished far enough that it can be considered a song, we take it to the rehearsal space and finish it up there. At rehearsals - if/when you get stuck with your own stuff. What do you play in those moments, or in times when you've simply had enough?

If really nothing works we might jam a bit. This hardly ever leads to new songs or real ideas, but it's just fun to do every once in while. Apart from a few isolated riffs, we don't play any covers really. We just never made the effort to collectively learn full songs by others I guess. If we're tired of playing altogether, there's always stuff to discuss: gigs, releases, artwork, gear, whatever. Beer can help too.

What was the major influence while writing, and who takes responsibility for what while in writing process?

Influences come from all over the place, we all listen to a lot of different stuff. We have the vague rule that "a good riff is a good riff". We tend to mostly agree on what is good and what's not, so in general anything goes if it makes us nod our heads and raise fists. That said, a couple of specific influences would be bands like High of Fire, Baroness, Grand Magus and Mastodon. Just good heavy bands with a progressive edge to them. We try to mix up styles in our songs as well. A slow heavy riff is way more slow and heavy if it has a fast agressive riff right before or after it. Playing with these concepts is one of the things that we do to keep the instumental music interesting and challenging. As for writing credits, we all contribute to the writing process. The input differs from person to person and from song to song. Some of us write more than others, but running a band is so much more than just writing music and playing it. We share all responsibilities of keeping this band going on all fronts, so at the end of the day we all put in equal effort.

If one day you run into an amazing vocalist...then what?

Haha, well never say never, but I think it is very unlikely. Not that amazing vocalists don't exist - they're rare, but they're there - but TANK86 wouldn't be TANK86 with a vocalist. It would be a different band. We write without vocals on our mind, so I think it would be wrong to add vocals as an afterthought, we'd have to change te way we write and by that we would change what makes this band what it is. So if an amazing vocalist ever does come up, I think we'd keep TANK86 going straight where we are now and maybe start a different band with the vocalist.

Damn, only that much time till the world explodes is it? Well we better start cranking out the next album before that and do some heavy touring. This band has always been about progress, that is what keeps us going. We always try to play bigger or better shows than before and put out better albums than before. If we've only got that little time left, we'd better pick up the pace and start doing it double time.

Do you have any new music written since the release of Rise?

Yes we do, we're currently recording a brand new song for the aforementioned 7" split with SardoniS. We plan to do a small promotional tour with SardoniS after that as well. Apart from that we're working on new songs all the time, so we have a couple of half-finished songs lying around as well that we'll be working on the coming time.

Since you promote and book yourself - is there a possibility to see you in the U.S. in the near future?

We're currently concentrating on playing Europe. We'd love to come over to the US and play of course. It's just that much harder to pull off because of traveling costs and our network over there simply not being as big as it is here. If anyone has good ideas on the matter over there, we're always listening. Maybe some like-minded bands from the US want to join the Rising Magma clan and we could get some exchange going.

You heard it people, get in touch with TANK86!!! Thank you again for finding time to do this. Any last words?

For now: Stay heavy, you bastards!