When Zack exited Dead For Days I was worried that talent and passion that he's got for extreme music will be lost. I was worried that problems that they were having will burn him out and throw him on the tracks of everyday boredom and lack of willingness, but instead he decided to start a new project - a furious ass kicking to anyone interested, but from a slightly different angle than what he used to. God Dementia is the name of his new band/project and if death/grind is something that interests you than don't skip that one. With everything that happened over the last couple of years and with the new album out in the open, I had to find out whatever happened, when it happened and who did what. And why. 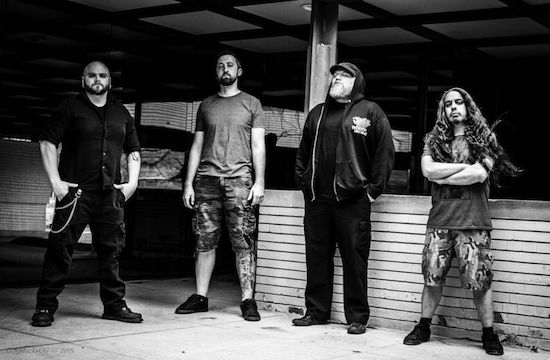 Hey Zack!! Thanks for finding time to answer some questions. It’s been quite a few years since the last time I interviewed you for MetalBite.com, what have you been doing?

Yeah it has been a while. I've been just preparing my latest project after I quit Dead For Days. That’s kind of when I realized, wow I really enjoy writing music! I should do that more! So I did just that.

And what a great idea that was, new album has been available for couple of months now, people like?

Yeah so far we have very positive responses. I mean, you never know what you have until you release it to the vast areas of the internet. So far there has been no negatives so that’s very encouraging.

How did you come up with a name of the band, what would you like people to think when they hear it?

Ah the band name... let me just say that it is very difficult nowadays to come up with a name because everything that you think sounds cool already has been taken. God Dementia has a versatile meaning: it’s about turning a positive into a negative which is happening a lot around us. Turning a concept into a demented view. Lots of social or religious views start out as great ideas and then people get their dirty hands on it and twist it to their own benefit. Think about religion or capitalism or socialism. On paper they sound great but yeah... people...

Tell us about rest of the dudes in the band, are they permanent members? It seems Dead For Days turned Reign Inferno and then ended up God Dementia LOL?!

Yeah we pretty much are all the three bands minus one troublemaker. Band drama you know! Some people just want to cause problems rather than make music. That chapter is done finally and we can focus on making sweet grind core slash death metal!

What about the cover for the album, care to explain meaning behind it, who is responsible for it?

The cover was done by the very talented Raphael Gabrio of Insane Visions. What I wanted to capture there is how we are. You pretty much have shit shoved down your throat forcing us to consume and constantly being watched till we are barely human anymore. Just shred of a person that’s constantly being preyed on based on its religious or social delusions. Consuming the delusional. Raphael did a great job, I gave him a vision and he made it insane! Maybe that’s why he calls his work Insane Visions.....

You are credited with composing and arranging music and writing lyrics on Consuming The Delusional, but even though bass lines you could probably do, I’ve never seen you behind drum kit, care to elaborate?

LOL, I've never touched drums in my life, it’s just something that is just too much for me and frankly I have huge respect for death metal drummers to be able to pull that off. The whole cd is a collaboration of all of our talents we all play different instruments, like Rick for example is a great drummer but even greater guitar shredder!

Rick on guitar is something I’ve never seen but if he’s not behind drums than who is and how do you mean collaboration of all your talents?

We are in search of a drummer because the drummer is Mr. EZ Drummer from Toontrack (drum machine). If we won't find a decent candidate Rick would pick up his drum sticks one more time. I would really like him to play the guitar he’s talented as hell and no one really knows about that because he’s always been a drummer. But yeah, if ya know a good guy let me know!

Enough about that, tell me about recording process, is that the same studio you’ve used with Dead For Days?

The recording was done at Comatose Studios in Kankakee IL by Dennis Pleckham who is also involved with a very popular doom metal band Bongripper. He did a fantastic job on mixing and mastering and we will definitely work with him again for our follow up. We did a lot of work at my house and brought the files to him to mix. With the technology that is available nowadays you can do a lot of preproduction at the comforts of your own home.

Great job indeed, album is powerful and it’s a great mix of death and grind sound I’m also pleasantly surprised with the inclusion of many new pieces to your new puzzle, there is even few solos in there, yours?

Hell no! I’m not a soloist I actually look like I play guitar hero compared to Rick. Very talented guy, we worked on the solos together but 90% of them is just him being awesome!

You’ve mentioned that you got some new stuff prepared already, leftovers from last session or brand new never used?

I always have stuff brewing. I love death metal and always create something in my spare time. We actually have 10 songs ready to go and we should go to the studio in a few months. Just need the guys to check the songs out and tell me what can be improved. And there’s stuff for a 3rd release already, I can’t stop! 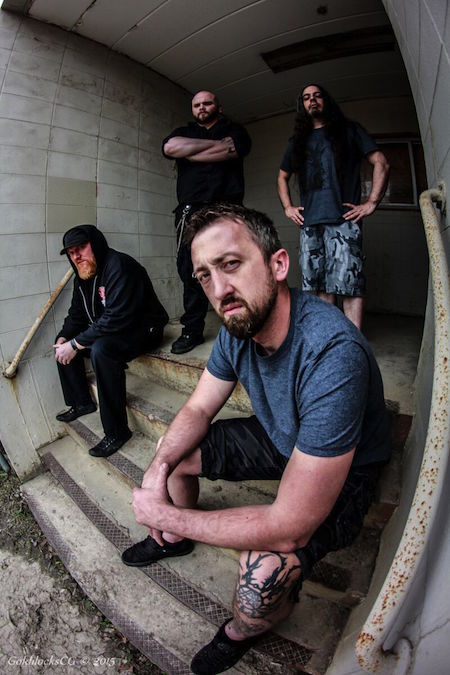 Keep going man and never stop. Every time you put something out you improve on all levels. I like what Cody did with vocals on the album, they sound angry and demand attention, was it all him or did you have a say so with vocals too?

It’s all him, he’s an angry dude and you need that in death metal! Of course we worked together but his style is all him. He delivers the message and he can do it in a way that you can understand which is awesome.

Which brings us to our next question. You wrote all the lyrics and I see you being pissed of about quite a few things, there’s society, religion, life, media and some more. You seem very conscious about what is going on with the world and not afraid to talk about it. What gets you going the most?

I would say ignorance, bullshit arguments and just plain stupidity. Common sense is pretty much gone. I think social media exposed the idiots of our society and I sometimes miss the pre-Facebook era when I was not aware of all the fucktards that are out there stating their shitty opinions and have even shittier people agree with them. I would say people get me going the most.

We could talk for hours about what you just said. Completely agree. Since you are the guy that writes most of the stuff tell me this…how do you do it, where, on what, what do you use and what guitar do you play?

I do it right at home, I have a mini studio that is perfect for writing. It’s awesome the way technology progressed! I use a drum machine and recording software and bam! Song is done. So fast if you’re in the creative mood. Really enjoy it.

Who is responsible for cooking up the sound of the album, I hear mix of many different influences in there, was it your idea, was it in any way premeditated?

I just used a word cooking and it got me thinking…you’re pretty good in the kitchen so can you share your favorite dish lately and how do you prepare it?

Mmmm cooking....
I just did potato pancakes. I prepare it with brutality! Lol

Potato pancakes…did you grate them or did you GRIND those suckers LOL. And the last one….when are the shirts gonna be in? LOL

Ah shit... they're coming I promise. Everything takes so much time. It’s frustrating.