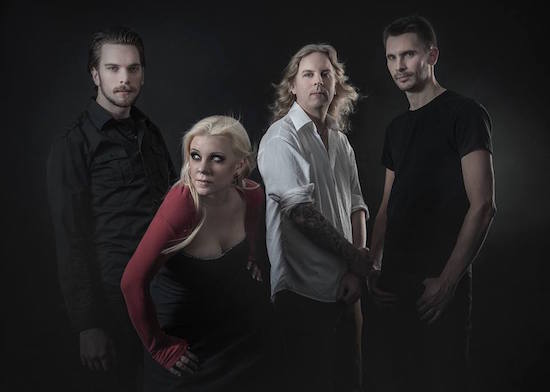 To start off, tell us about how Inner Sense came to be. How many of your current members have been there from the start, and how did the line up come to be what it is?

Jenny: Me and Markus met through our old band. After a while we realized that we had similar musical influences so we decided to start a new band with a bit more of a progressive approach. More progressive elements. The old band was more... straight forward heavy metal I guess you can say.

Markus: Yeah, so Jenny and I have been in the band from the beginning. We found our current drummer thru an ad on a musician seeks bands site. Then his brother joined after a short period and since then we have had the same line-up

Jenny: Ok, my influences are many. There is sooo many great musicians out there. I'm inspired by groups like Pain of Salvation, Dream Theater, Poets of the Fall, Gary Moore, Sonata Arctica, Kamelot and many, many more. When I was really really young I wanted to grow up and be just like Slash... that didn't really happen though :} I also love video game music so composers like Harry Gregson Williams (Metal Gear Solid) and Akira Yamaoka (Silent Hill) have become very special to me and of course... a big name in both mine and Markus' world is Daniel Flores and Mind's Eye.

Markus: After hearing Appetite for Destruction by G'n'R I was sold to hard rock music and shortly after I bought my first guitar. At the age of 14. Nowadays I have many influences and bands that I like and get inspiration from. So here are a few bands - Nightwish, Dream Theater, Symphony X, Poets of the Fall, Kansas and The Alan Parson's Project.

I understand Daniel Flores of 'The Murder of My Sweet' is the producer of your upcoming album 'Life Sentence'. How did this come to be, and what has it been like working with him?

Markus heard a song from "A Gentlemans Hurricane" online and decided to buy the album. He went to the music store to buy it but they didn't have it so he ordered it, but they only had the dvd-version (special edition). When we got it we watched the video and realized how kind he seemed to be to the musicians in the studio and instantly thought that he would be a great guy to record with. Markus saw that he was stationed is Stockholm, so he just wrote to him, expecting nothing really, but got a reply the day after. He told us we could go to the studio and meet him and bring some sound samples, so that's what we did - nervous and shaking, with a terrible-sounding cassette-recording from a rehearsal. Although it was of poor quality he liked the harmonies and chords and decided to help us. He was as kind in person as he seemed to be in the video. Working with him has been great, and very educational and of course fun. He gave us the confidence to continue what we were doing and grow as musicians.

There are many difficulties in being an up and coming band and I admire those who persevere through difficulties. How do you stay positive in the process?

Jenny: I just love music and nevertheless what happens on the outside it's an outlet that will continue to be there. A way to tell stories, and work through emotions. I think we may have two different answers here. It's just great if somebody else likes it as well, it's a bonus.

Markus: We just love music and want to compose something of our own. With our own sound. Try to be original and have fun doing it.

What inspires you to want to be musicians? Would you say there is a lot of intrinsic value in it for you, where the feeling of completing great work alone goes along way?

Jenny: Yes, for me it's the most important factor of them all. Just... writing music, because it feels good doing it and hopefully, someone else will get some value from it also. It feels great if you can influence somebody in a positive way.

Markus: We do this for the love of the music and try to make music that we like and if someone else likes it that's awesome!

You seem to do a lot of interaction with your fans, which I really appreciate as I'm sure they do. How much have you enjoyed the positive response you have gotten from fans since having more of a Facebook presence, and being able to interact with them?

Jenny: Well, I merely think of our Facebook contacts as "followers" and/our "friends". I love having people around that I can share the passion with. And to see people connect that wouldn’t have gotten to know each other otherwise is also a very warm feeling I think. We have always dreamt of releasing our debut album and for me it's wonderful with all the support we have gotten. Feels surreal.

Markus: It makes it all so much more fun when people actually like what we have done. It's really a great feeling and makes you wanna write more music. Really motivates you and lets you know that we're doing something right! We wanna be an open family for the people that like our music.

I understand that it is primarily you two who do the songwriting. What is the songwriting process like, do you write about themes that are personally close to your heart?

Jenny: Yes... that is also kind of why we have "Inner Sense" as the band name. Everything "story wise" always has a close connection to something that we feel is important for us. It's all about what is going on on the inside. When it comes to writing the musical parts Markus brings the riffs and I write the keyboard arrangements and melodies/lyrics. Then we fight over the song structure. In the end we try to compromise as much as we can and usually we come to an understanding in the end.

Markus: Mostly the stories are things we have experienced ourselves and our thoughts about them.

'Safe In The Shadows' was the fan voted winner for your first lyric video, I personally had high expectations for it and it still exceeded them. Do you guys each have a personal favorite from your upcoming 'Life Sentence' album, and if so what is it and why?

Jenny: I'm glad you felt that way about "Safe In The Shadows" :} Well, every song on the album has a different meaning to me so it's hard to choose a personal favorite. Although some of them are based on things that are more personal I guess. "This Body Of Mine", and "Safe In The Shadows" are maybe two of those, and "Only The Silent" and "Thy Will Be Done". That was four... it's hard to chose... but if I could chose only one, I guess I would have to go with "This Body Of Mine" It feels like it is the most important song to me personally. Markus favorite is "Pitiful Mind". "A Different Part Of Paradise" is also written to a deceased close relative to me so it's important too. Just wanted to say that but... "This Body…" is the "winner" :}

The 'St. Elmo's Fire' theme is one I particularly like; about finding hope even in what are seemingly the worst of situations. I commend you for a unique idea of a song about a near tragedy having a positive spin. Do you find writing about positive themes like this to be personally inspiring or therapeutic, for your music and/or other things?

Jenny: Well, I think it is important to everybody to always keep some light in the darkness. Even when things look reeeeaally bad (as in St. Elmo) there may still be some un-thought-of hope. For me, it is very therapeutic; it's a major factor in why I enjoy writing music so much. It gets me through hard times and leaves me with something more positive as a "physical" memory, rather than just the bad experience that may have been the inspiration to start with.

Jenny, you are both the vocalist and keyboard player for Inner Sense. What are some of the challenges that come with being involved in both vocals and an instrument for a recording or live performance?

The more "roles" you have, the more time it takes up of course. But since it is fun it feels like lifetime well spent. When it comes to recording I record most of the keyboard arrangements in my home studio before even entering the recording studio so that saves a big chunk of time. Sure, it’s more work than just having one instrument, but it also helps in writing melodies and harmonies since you know the arrangements inside and out. Of course I can play one of the channels, but then I feel that the vocals are more important live. Live I have to focus on the vocals of course. Since the keyboards may have many (I’m looking for a word...channels, tracks midi/audio-channels) it's not possible to play all of these live by myself.

In the future, which bands do you one day hope you can tour with?

I would love to play with Poets of the Fall, I think. But there are so many great bands out there... It would be great fun to tour with The Murder of My Sweet also :}

I think Markus would love to tour with Nightwish one day haha.

What, if anything that has not been covered in this interview would you like the listeners out there to know.

We are unsigned and releasing this debut-album on our own, but we still are open for suggestions.