I was going to write some kind of intro paragraph for this interview but words of Brody kept bouncing around in my head and I believe they are better than anything I would write so, here they are and the interview follows.

"This record is Rivers of Nihil being exactly who we want to be. Many bands get stuck in a comfortable routine of releasing the same album over and over again. Constantly relying on the same familiar formula may work for some bands, but it does not work for us. Music is art, and art is ever-changing. Without change, there is no progress. Without progress, the very fire that powers art and expression will die. This record is the sound of where we come from, where we are, and where we are going." - Brody Uttley 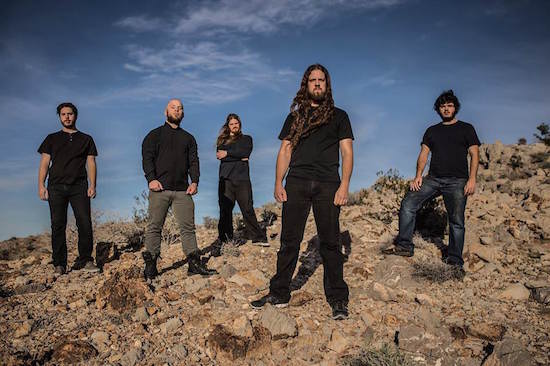 You probably would rather talk on the phone so thanks for taking time to do this the hard way. How are things in the Rivers Of Nihil camp right before the release of the new album?

Things are good! Just spending some time at home now getting ready to head out and spread the word on the record the old fashioned way. We're all really eager for everyone to hear the record, we put a lot of ourselves into it.

They can expect to hear a lot of new sounds from us that they wouldn't normally from us, or other death metal bands. There's a lot of experimentation on our part on the record, some more emotional themes explored. Of course, there is plenty of heavy shit you could fistfight a grizzly to.

A few days ago a track 'The Silent Life' came out, and we can hear a saxophone on it. To make things even more interesting, supposedly there are more songs where it was utilized. Tell us more about whom, why and when please!!

A friend of ours, Zach Strouse, who played in a band that Brody record for a little while back just happens to be a fantastic sax player. Brody sort of sent him an early demo of 'The Silent Life' as kind of a novelty, just to see if anything would inspire him to play on it. He sent us a cell phone video of him playing over the track and we absolutely loved it. That was sort of the beginning of the wider experimentation on the record. It's kind of like, "well, if we've gone this far we might as well do this thing here too." Zach ended up on a number of tracks, and his performance is phenomenal. Couldn't be happier with what he’s done with the material.

The new album premiere is just around the corner, so are you preparing anything special for the big date; will there be a video for any of the new songs?

The short answer is yes. Expect a good helping of video content and new music to listen to in the coming weeks.

What grabbed me about Rivers Of Nihil when I first saw you was that super technical stuff that you do, but also so many hooks and parts that immediately stay in your mind. Is that something that we can look forward to hearing on the new album?

I hope so. I mean, we never really put a hard focus on being super technical so much as it's sort of a byproduct of the style of music and just wanting to play riffs that challenge and interest us. But we'll never throw an idea out for not being "tech" enough as long as we like it and it sounds like us. I think the catchiness aspect is more of a focus for us. We want the songs to resonate and to feel like SONGS, rather than a collection of riffs strung together. We want to give the listener something to relate to and to come back to more than once. As far as the new record goes, that ethos hasn't really changed for us, so yeah, those elements will still be in play.

What do you consider the most important element in creating your music? Is everything buttoned up when Rivers Of Nihil goes in the studio or there is still room for a little improvisation?

Like I mentioned earlier, the songcraft is the most important element for us, if the songs don't work then neither will the record. On the first two records, yes, everything was totally written in stone walking through the doors of the studio. In fact, we basically had a fully working pre-production version of Monarchy totally finished before we walked in to do that record. This record was a little different though. The songs were done, and the lyrics were mostly complete when we started, but we also felt a need to experiment in the studio this time. There were a lot of things added in right then and there, especially in the vocal booth. If someone had an idea for a particular vocal piece we would just go ahead and try it, whereas in the past I would normally have the complete picture in my head and there would be very little deviation.

Was there anything that you did differently in the writing process of Where Owls Know My Name?

Aside from adding a lot of new sounds and textures, no, not really. It was all pretty much gone about in our usual way. It's typically Brody agonizing over riffs and song structures in his home studio, sending me and the band clips, then hammering out the details of a song little by little. It seems a little alienated to do things this way from the outside, but it gives everyone a chance to add input in a clearer way than everyone in a crowded practice space screaming over one another as we clumsily scrape riffs together.

Did you find yourselves employing anything from the first and second record onto the new one?

Always. We always learn from previous experiences. We often tend to do a lot of post-mortem criticism of our own work, discussing what we think worked and what didn't and what needs to change or improve about things moving forward. I don't think this is unique to us though, I can't really imagine most bands getting along without that sort of introspection. Where Owls Know My Name, while it covers a lot of new ground for us, it's also a solidification of our sound as a band. It's taken the foundation of what we've done before and restructuring what’s built on it.

I'm kind of guy that likes to read the lyrics when listening to the album, but unfortunately none of them are available to me at the time. Tell me about the lyrics on the new album, as I've read somewhere about a continuance of the story from Monarchy…

It is, in a way. Monarchy leaves off on a note where things are looking promising for the world in which the story takes place. WOKMN picks up millions of years later, following a protagonist who is the sole remaining sentient being on Earth, chosen to live forever in order to witness the end of the planet itself. But this is all sort of secondary in my opinion, the album really feels like a reflection of a lot of dark emotions I was feeling at the time of writing. There's just a blanket feeling of emptiness and a lack of belonging that permeates the lyrics. I think that's what's more important to the record, rather than some grand story like on Monarchy.

To be honest, I wasn't aware that, lyric-wise, the story continues through all the albums. Any chance for a condensed version of what happened so far?

It's a little odd to sum up, because the story spans millions upon millions of years, but I can try. Essentially, the story is about our planet (or at least something very much like it, possibly in an adjacent reality), and it's lifespan and experiences. The Conscious Seed of Light was about humanity's role in becoming a part of the grander consciousness of the Earth, and our eventual exit from the planet on a physical level. Monarchy picks up thousands, if not millions of years later, where after a long period of desert lifelessness, things gradually begin to evolve again, and life makes a slow crawl toward intelligence. Eventually these new beings, the shepherds, begin to make similar mistakes to humanity, creating a brutal religion-based governing system and nurturing inequality among it's people. Eventually, the planet itself, the 'conscious seed' if you will, intervenes directly, and offers the shepherds a way to solve their problems and unify. The shepherds experience a mass spiritual awakening and transcend their physical forms, becoming the new oceans of the world. One non believer in this spiritual ascension remains behind, and is chosen to become an immortal witness to the Earth's slow, final demise, which is where Where Owls Know My Name comes in.

Did you have any particular goals set out for yourselves this time around?

Just to not repeat ourselves really. We were really proud of what we accomplished on Monarchy, but we didn't want to make that record over again. So the goal was to make new steps for our sound, and to make the songs carry more emotional weight, these goals I think went hand in hand in this case.

The tour with Dying Fetus and Thy Art Is Murder starts in a month. How excited are you?

Very! Really excited to get out there and play this new material on such an amazing tour. It's a fantastic opportunity.

In your opinion, which song from the new album is its best representation?

Personally, I would say the title track. It's the most adventurous in my mind and really achieved what we were going for I think. It's got my favorite set of lyrics on the record as well as a fantastic cameo from my brother in law, Black Crown Initiate's Andy Thomas.

What are the 3 songs (if applicable) that just have to be played at every show?

Well, if you had asked me this during the last tour cycle that would have been super simple to answer, Rain Eater, Sand Baptism and Soil & Seed. But now with all these untested new songs it's hard to say what will happen. I can see The Silent Life becoming a bit of a live staple for us.

OK, that is all I've got. You'll be in Tampa on April 8th so I'm very excited to see you again; shall we have some brews after the show?

I don't drink, but I'm sure the other boys would be more than happy to oblige! We'll see you soon!