Nero Doctrine released one of those albums that seem to sneak up on you and once it’s in your head it doesn’t let go. If you haven’t listened to it yet, you can consider this as a reminder to give it a spin and maybe a warning too. Whichever one it is you may as well try and get yourself accustomed with the band, find out about what’s on the agenda and about the way things work. Read the interview below, read the review I wrote but most importantly – listen to the music!! 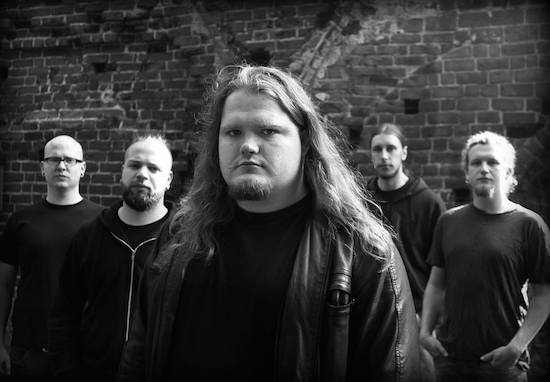 Here is a question that you are going to hear a lot probably, why did you change the name of the band from Dystopia to Nero Doctrine, is something wrong with Dystopia?

There is nothing wrong with Dystopia, it's a solid and strong name. Unfortunately it is not unique. The name was inspired by a Misery Index song and when we started to make music, nobody thought of getting in trouble with copyrights later. We knew that we had to choose another name if we wanted to be successful with a label Boersma-Records. So we chose Nero Doctrine as a good alternative.

What is Nero Doctrine, what is the meaning and what does it relate to you?

Most people just do what they want, no matter what consequences. Just like Nero did. And that behavior is taught and developed over generations, not in schools or in universities, but interpersonally und subversive. With that trait mankind cannot live on long-term, so the Nero Doctrine dooms us all.

Was changing the name and beginning to play melodic death/thrash an unanimous decision of the band, how did the whole thing come about?

It was a natural process. We all like heavy melodic stuff, so it's more like a consequence that the music develops in this direction. But we try not to be entrenched on a particular style of metal. Maybe the next record is more black metal, maybe more dark. We will see.

Interitus in Latin means: devastation, ruin, downfall which I think is quite the opposite from having a new album and starting with new name. Is there a hidden meaning?

Marko found the word in a Latin book and we have thought that this name would summarize the mood of the album fairly. Interitus isn't a concept album but every song deals with the topic of downfall in its own way.

New album has been out for more than two months now. Response has been good from what I see. How does it feel to know you did well, what is the best thing and the funniest you’ve heard about the album so far?

As musicians it isn't that important to us because we just wanted to create an album that we're satisfied with, so we're absolutely fine. But of course it's cool to see that we're earning respect for our art. The best thing about it is that we get response from all over Europe, America and South America. That is still unbelievable for us. A funny thing about the album? "Nero Doctrine's debut sounds much fresher than the last Arch Enemy album." End of quote. Burn :)

I know you’ve recorded demo material before but now you have an album to show to the world. Were you ever stressing about the whole first album thing and such?

Strictly speaking it's our third album in this constellation, so the answer is no. It wasn't stressing about the whole third album thing ;)

How was the recording itself?

Very relaxed. We took two weeks for the recordings in May 2017 and Jörg Uken is an absolute professional and knew exactly what we wanted. We had enough time to find a good sound, to work on details and to have a nice time among friends.

It was our second time in a studio. Tools of Oblivion was recorded in Osterode by Thorsten Sauerbrey. For Interitus we searched a studio to get a dynamic and dirty sound which is modern nevertheless. We aren't professional musicians, hence it was great and exciting recording session in a studio where some bands we are listening to recorded their albums as well.

We couldn't agree on a specific design before the recordings. Jörg recommended "Killustrations", a company he often worked with and we were thrilled by their work.

Björn Gooßes of Killustrations, also singer of Night In Gales, made our cover and artwork. As we said, every song deals with the topic of downfall and the cover shows exactly what is heading towards all of us. Mankind that is drifting near the edge in front of ruins we once called our home. Björn just nailed it.

It's a mixture of all those things. Christoph is the creative motor of our band and writes a lot of the music. Everyone can suggest ideas and we try to work on everything together. We also went on vacations together to work on new stuff.

How about actual creating of the music, is it a bunch of guys actually in the practice room, files being shared, or is it something else entirely?

Again, it's a mix of all of these things. Sometimes we are together in our practice room, presenting ideas to each other, other times we sit at home figuring out what fits good and just share the files with each other so everyone can listen and get inspiration from another one.

I don't own the album, and the promo came without the lyrics sheet, so can you tell me about the words a bit?

Interitus means downfall, so the lyrics are mostly concerned about this topic. Every civilization will disappear one day, we are no exception. But the worst thing in this process is the loss of humanity. What makes us human? How is it defined? Does "humanity" really exist? We also wrote songs about the overall effects of war, religion and defiance.

Album came out on digital format and CD so far, any plans for vinyl?

We haven't any plans to make a vinyl version at the moment.

Are you a collector? What do you buy?

We're all huge metal fans, so everyone owns cd’s, vinyl or cassettes. Enumerating what albums we all buy would go beyond the scope. But last year we were very addicted to Anticult by Decapitated, Of Ghosts And Gods by Kataklysm, King Delusion by Nailed To Obscurity and Deep Calleth Upon Deep by Satyricon, just to name a few!

What are Nero Doctrine plans for 2018, is world domination on agenda?

World domination is planned for 2019 ;)
We are happy when we can play many concerts and share a few beers with nice people, hopefully with the people from America too one day. And to all metalheads out there: Risk an ear and keep supporting the underground and your local scene. Every person that spends hundreds of hours into learning an instrument to form a band and play shows, deserves it, to get a few minutes of your time. Metal on!