SwarmFest last year was a place to be, that is a fact. Between all the black and death metal bands that played that night, there was few that were quite atypical. One of them calls themselves Unearthly Child. Playing their take on sludge/stoner/doom they definitely turned some heads, raised some eyebrows and confused some of the folk being there but for me it was like finding a $100 dollar bill in the stack of $20s. If above mentioned styles are to your liking then don’t skip on reading this interview, visit their page and most of all listen to their EP "Awaken". 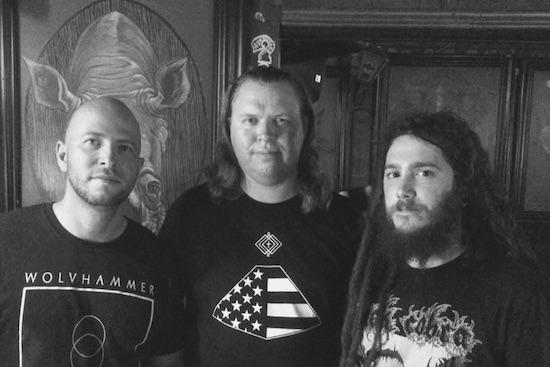 Thanks for finding time to talk with MetalBite, since it's the first time we do this let me ask you this: is there a story behind the name of the band, what made you chose Unearthly Child?

We wanted a name that reflected our interests in sci-fi and something that was different. "Unearthly Child" is the name of the first episode of Dr. Who (yeah, we're dorks).

How long have you guys been playing together?

We have been playing together since late 2015.

How do you work on your songs, is it a collective effort or is there a leader/composer/tyrant responsible for all that happens?

We are all tyrants but work collectively. Jamming an idea or a pre-written riff or rhythm together and if it works it becomes a song, if not, then not. We had a lot of bad luck with finding a band room so we were homeless and drifting for a while in 2017 but finally found a space to work and have been working on new material since.

How long did you work on "Awaken"?

The writing came together fairly quickly and we were playing live by early 2016 and recording the Awaken material. We are in the process of finishing up the writing for our next group of songs set to be recorded at the beginning of summer 2018 for release later this year.

When trying to put you in a genre doom/sludge/stoner and psychedelic are often used, which one is closest to your heart?

It's just rock and roll and heavy music. We all come from different musical influences and do not consciously intend for any genre label. The volume and the tone comes naturally from our influences and working together.

What made you play that way is there a story behind this decision?

No story. Just jamming and creating.

There is very little information about you on the internet, is it premeditated, are you in hiding, why so little info out there?

Not premeditated, but it is nice, isn't it? This is our first interview so it should help.

"Awaken" cover has this 70' psychedelic vibe, what exactly is it portraying, why this particular material for the cover?

A splash of color and a new world is more interesting than the color black and a bunch of skulls. But we might do that next.

Tell me about the lyrics on the album since they're not in the booklet and not on the net.

I'm sure you are very proud of the music you've created (and you should be) but if you had to explain it to someone that never listened to it and you had to pick strong and weak spots, how would you do it?

Motorcream: a trio that plays a style of loud rock and metal like Motorhead or Cream.