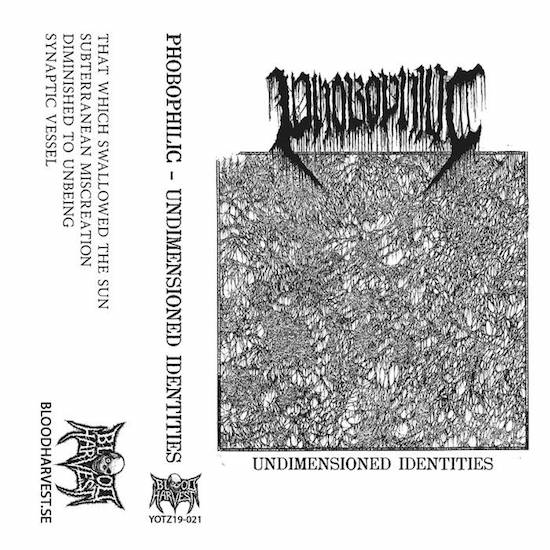 PHOBOPHILIC has excavated some of the most unnerving death metal you will hear in 2019, this is old school gallantry from the bottom of the genre's most reputable realms. Have we not been battered enough for the year? Apparently not, according to Blood Harvest Records whom will be handling this sacrifice before the altar of embryonic death metal. Undimensioned Identities is Phobophilic's second recording due out the 13th of September, yes Friday the 13th, so better have your hex-proof underwear on and try to grab a hold of this puzzling piece of matter before the scavengers of the underground gobble it all up.

Landing amidst the murkiness with a glowing aura of curses contracted from a place in time no eyes have seen but their own, Phobophilic smoke-screen's the senses of the doubting and corrodes the essence of non-believers with these 4 backwards, crepuscular testimonials. Short in length, but effectively crafted to trigger wandering minds seeking a passage or route to astral and metaphysical mysteries, or so it may appear; Undimensioned Identities provides that frequency of sounds most of us have beard but only few would dare understand; raw, yet graced by the touch of eloquent hands, these abstruse anecdotes crafted and proliferated within the soil of the genre, comes at a time where death metal is peaking and the competition is ever so strong; however, what is at hand can withstand the mighty force of their veteran comrades.

'That Witch Swallowed the Sun' alerts you of the incoming blitzkrieg on the senses, but it's a warning enfeebled. Within the first few musical notes and blustering baying you're already deep-seated and stunned by the trance of the ceremony. The following verses of 'Subterranean Miscreation', 'Diminished to Unbeing' and 'Synaptic Vessel', seal the exits shut and for 18 minutes you're being violently flung-around in a whirlpool of un-creation. Vox are menacingly loud, bass notes drive the cutting force of the riffs and the drumming moves-around like a schizophrenic case.

Interpret this material how you may, personally there's lots of ideas being tossed around when listening to Undimensioned Identities, some within the realm of what we may refer to as fiction (until the penial is penetrated) and some actively apart of grim realities and uncertainties such as nuclear war. Whatever they be, Phobophilic's Undimensioned Identities could be used as accompanying music to the most dreadful and abominable events. Only an EP, but damn it screams 'full-length release'; one better be on the way to follow-up this stellar piece of work. Get your wallets out and add this to your death metal cabinet before Yule arrives.