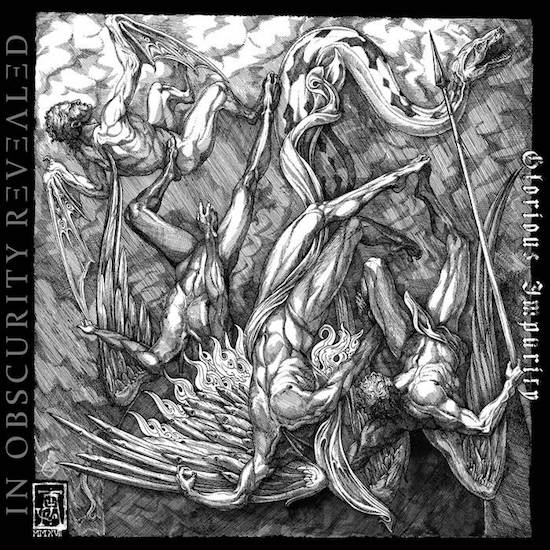 The 4 piece Mexican unit of IN OBSCURITY REVEALED will crack open the fissure of all things foul December 13th 2019, which will see "Glorious Impurity" released on CD format through Blood Harvest Records. By finally making its way to a more sustainable medium for the sake of its longevity, "Glorious Impurity" can now afford to mauver the underground more effectively.

'Coven Maleficia' is but one highlight that should be more than enough to justify support, while the remainder of songs serve up licks non-stop to feed your black/death metal fetishes. Prepare your appetite for a plate full of condemned pleasures and hostility, altogether destroying the base of virtue and sanctity.

No single wandering mind could birth into life such a disastrous display of death metal without subjecting itself to the peril and pleasure portrayed; hence to make manageable such an ancient force of evil the accursed quartet of IN OBSCURITY REVEALED answer the slithering hiss of whores chased for ages with a brutish and bold display of death metal/black metal. Casts in a slingshot of war metal styled drumming and untamed vox, "Glorious Impurity" from an angle only bares the tag by chance as every note played alters the genre's path to reflect an animalistic rite. 'Our Crimson Madness' flings you into a chasm of carnivorous vocals, a whirlwind of riffs and ransacking drums. What began on a linear path of death metal suddenly shape-shifts with the introduction of 'Coven Maleficia' implying the first track was but a 3 minute prep and stretch session for what was to follow. With riffs starting to appear out of control and the drumming adopting an almost acrobatic carriage moving quick and deft with what little space is granted by the guitars, the fills and rolls pour out their own share of oohs and aahs, among riffs and solos left and right.

At the center of all this happens to be a competition occurring among guitars and drums not exclusive of the bassist as he is made to fend for himself all the while playing the role of a referee through the fierce competition. 'Beast and Serpent', 'Congress Cum Rampage', and 'Abhorrent Coffins' are the results of such rivalry taking place, tracks that not only dominate the highlights but push "Glorious Impurity" beyond the mark of an average death metal band and album. Vircolac brushes the senses too often to not find some similarities sound-wise leaving me to wonder whether IN OBSCURITY REVEALED is in anyway influenced by the Irish lads.

IN OBSCURITY REVEALED is: