If hellish harmony soaked in South American diabolism is your craving for an upcoming holidays season I strongly suggest diving into the occult word of Chile's INVOCATION. With the new mini-album "Attunement To Death", this possessed trio delivers ritualistic mixture of black and death metal drenched in sulfurous energy over witching fires of baleful sorcery. Musically enchanted by their numinous traditions, INVOCATION creates recording that's fermented in mysticism and supernatural aesthetics.

The hypnotic "Attunement To Death" is going to be available on February 21st, 2020 via Iron Bonehead Productions. 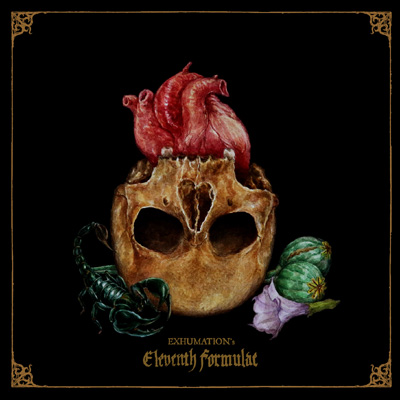 Indonesian death metallers EXHUMATION are back with the new full-length "Eleventh Formulae". Six years in the making, this terror-storm of untamed fury shows monumental growth compared to the already highly acclaimed previous efforts. While still based in its Eastern Asian foundations, "Eleventh Formulae" is executed with deadly precision that at times ventures into uncharted territories, and yet maintains its gritty and analog feel of old school death metal.

ANGELBLAST might be a brand-new entity in the metal scene but one listen to their debut EP quickly uncovers the wealth of experience within their ranks. "Rotting Paradise" crushes with dynamics and passionate delivery utilizing malevolent melodies and mind-melting solos. Featuring members from old-school Swedish cult Excruciate as well as fellow labelmates Darkened, ANGELBLAST "blasts" its way into the fold with this impressive opening declaration of death.