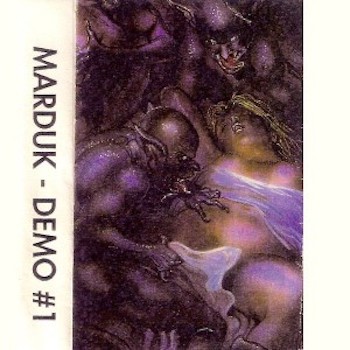 For this first report of the new year, we will be exploring some of the earliest works by legendary bands, and we are starting with Sweden's Marduk. They've gone through a few phases over the course of their 29-year-existence, the first of which was pure, classic Satanic black metal (including, but not limited to, ever-present corpsepaint, screaming blasphemy, and blast beats that are as hypnotizing as they are pummeling). We are starting with their original demo from 1991, titled (yep) "Fuck Me Jesus". (You can imagine what scene from what classic horror movie is sampled in the intro.) The music stands very well on its own, and is an effective reminder of just how long Marduk has been preaching the unholy gospel. (This demo predates the first recordings by both Enslaved AND Emperor.)

NOTE: We are enjoying the 1999 reissue CD of (gotta say it again) "Fuck Me Jesus", which also features some more recently-(at that time) recorded songs, including a re-recording of the title track from their full-length debut album, "Dark Endless", and not one, but TWO absolutely kick ASS Bathory covers: 'In Conspiracy With Satan', and 'Woman of Dark Desires'. 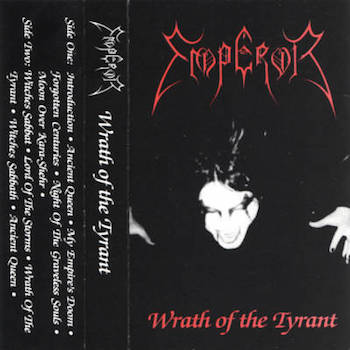 Next up are the two earliest recordings from a band that can truly be described as royalty.

Emperors, if you will.

Said recordings are the "Wrath of the Tyrant" demo and the self-titled EP from Norway's black metal deities, Emperor. Both were recorded in 1992. The former I first got as a cassette (from the infamous Wild Rags, R.I.P.), the latter I first heard as part of a split CD which also featured Enslaved's Hordanes Land EP. (I am currently listening to a later reissue which features both demo and EP on a single disc.)

Of the recordings, I can say this: Despite the very "necro" sound (raw, filthy, unpolished, etc), the band's penchant for gorgeous atmosphere and almost soundtrack-like song structures shines through. Their greatness was apparent pretty much from the get-go. Most of the songs here appear in more refined form on the band's debut full-length, "In the Nightside Eclipse". 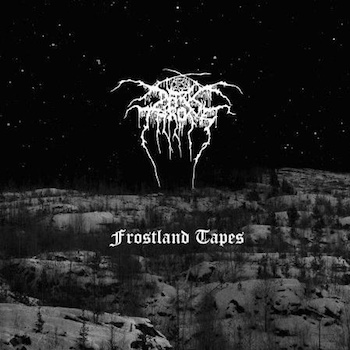 The only reason Darkthrone's rarities/demo collection, the three-disc "Frostland Tapes", is a BMR and not a PBMR... is because it's Darkthrone... and it's called "Frostland Tapes". Seriously. The most fascinating thing about these demos (1988 and 1989) and live recordings (1990) is just how un-Darkthrone-esque they sound. They sound like raw, promising, underground-as-fuck, old-school death metal. (I suppose that shouldn't be hugely surprising, considering the sound of their anomalous debut album, "Soulside Journey".) Even the raw recordings of their abandoned-and-revisited-years-later album, "Goatlord", have an almost prog feel to them. It's an awesome historical experience, hearing a band, whose music would become so recognizable and so influential, exploring and yearning to find their sound.

NOTE: The sound quality of pretty much every version I could find online is absolute dogshit. But I suppose that makes it all the more kvlt.