CULT OF ERINYES released their debut EP, Golgotha, early in 2011. Quickly after, their first full-length, A Place to Call My Unknown, was released gathering attention from all over the world. They would end up releasing two more full-lengths 2013's Blessed Extinction and 2017's Tiberius, a split with Zifir and two EPs respectively titled Transcendence 2016 and Veneer 2018.

It was Veneer, however, that truly changed everything for CULT OF ERINYES. With a new lineup, including members of esteemed acts like Wolvennest, LVTHN, Imber Luminis, new drummer Ahephaïm (Sabathan, ex-Enthroned), new vocalist/producer Déhà (Slow, Maladie) and new-found cooperation with Amor Fati Productions, with whom the band have joined forces to unleash their fourth full-length, Æstivation Cult Of Erinyes are ready to bring their enticing, more tumultuous than ever yet challenging music, delivering raw fury and haunting melodies to the forefront.

Ritualistic hymns, vicious and twisted vocals, furious rhythmic, and ambient digressions are only a few weapons which have made CULT OF ERINYES a band to be reckoned with. Don't miss it.

Æstivation was released by Amor Fati Productions on 21 December 2019. Another one from Amor Fati Productions (in conspiracy with Mare Cognitum's Entropic Recordings) is ACATHEXIS' stunning self-titled album. Originally released in 2018 on vinyl only, Acathexis was a brazen, bolt-from-the-blue display of atmospheric black metal brilliance.

Across its four-song/40-minute duration, Acathexis burns brightly with the anguish of insurmountable mental collapse, glorious despite its latently depressive themes. The sound field is thick yet sumptuous, impossibly emitting a remarkable amount of space & shade within such density. The songwriting shimmers, first from obsidian but then across a panorama of colors, drawing the listener deeply into ACATHEXIS whirlpool of unearthly delights. Cresting and cascading, surging and yearning, this is splendorous black metal imagination writ large - and it's just the start for ACATHEXIS, as work has already begun on a second album.

In the meantime, ACATHEXIS shall stand cold and alone, a monument of grandiosity and infinite possibility. Dreams never end; they only grow darker and more voluminous. 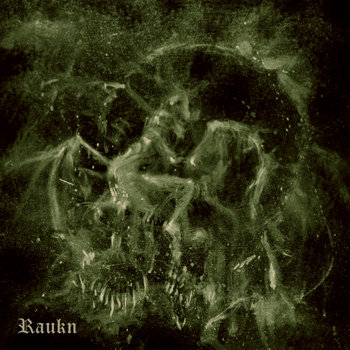 Bursting from the void in 2014 with a quick succession of two demos, MÚSPELLZHEIMR made their full-length debut with Hyldest til Trolddommens Flamme, an exciting development within black metal's deepest underground. From there, it would be two years of silence until their second album arrived. Titled Nidhöggr, the album would be MÚSPELLZHEIMR's first record in conspiracy with Amor Fati Productions, and proved to be an equally staggering display of elite black metal mysticism. A year later, in 2018, Múspellzheimr's third album arrived, bearing the title Raukn. However, it would only see digital release through Afgrundsvisioner's Bandcamp and in an extremely limited self-released cassette version. At last, Amor Fati Productions endeavors to shine a blacklight on this mesmerizing work by releasing it in the physical formats it so deserves.

Raukn sounds much like its cover art looks - ghostly, shimmering, maybe even a bit green (if we're speaking of the natural world). Its recording style is distant yet still tangible, conveying a feral physicality that somehow possesses gentleness or at least nuance; of course, the atmosphere is only intensified by this idiosyncratic choice of production. But, as always with MÚSPELLZHEIMR, it's their strident command of dynamics which truly makes Raukn the all-consuming experience that it is, swirling the listener into a delirium of gauzy, glowing obsidian, a hazy fever-dream that's impossibly vast, making manifest those thematic mysteries of nature and the beyond. Which is all to say nothing of MÚSPELLZHEIMR's melodicism, which hits a bewitching apex on Raukn.

MÚSPELLZHEIMR's name has already been etched into modern legendry, but with the long-overdue physical release of Raukn shall it reverberate further, and forever.