Heads For The Dead - News

MB Premiere and Review: HEADS FOR THE DEAD - 'Into The Red' full album stream I don't remember much about HEADS FOR THE DEAD's prior full length album Serpent's Curse though I did hear it was a fairly good album. Probably scammed through a few songs that I thought were cool but there was so much other stuff coming out at the time that it was impossible to keep up to date with the band. However, in a few days they are set to release a follow-up to their 2018 effort through Transcending Obscurity. This release is titled Into The Red, has 12 tracks and spans 46 minutes. And in comparison to Serpent's Curse, this latest album, regardless of if other great releases are out there; Into The Red does not take a back-seat and compels you to rank it amongst the best for the year. 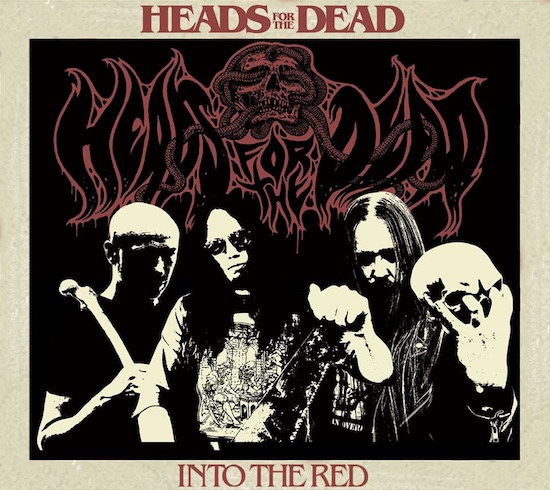 You can tell from the very first song 'Into The Red' that HEADS FOR THE DEAD are on a mission to outdo their last recording in all aspects musically. And that's the way it should be if a band is to progress and reach new heights in their music. Featuring black metal tremolo picking, groovy doom metal esque transitions, meaty thumps at the drum kit and vocals that sound a lot more resonating this time around, you feel as though the guys really put their.... you know...... heads down and merged their experience to craft something that will be hard to let go of even for the most decorated of death metal fanatics. Then the tempo takes a turn into the face of aggression on 'The Coffin Scratcher' with vicious blast beats, and murderous riffing to merge with the already clobbering death metal vocals. Off to a killer start already and it only gets better.

Also it should be noted that HEADS FOR THE DEAD do an exceptional job of giving the tracks featured on Into The Red a theatrical feel of sorts, so you get the impression you're listening to the theme music of some sickening event that took place. I found this happening with most pieces; for instance on 'Horror Injection', 'The Seance' and 'Multi Morbid Maniac' having already been titled live sinister incidents, they feature very musically animated, high-octane sort of compositions that truly immerse you Into The Red. This is for me the big difference between Into The Red and Serpent's Curse. Where the latter faltered in conveying its message and pitching its product, Into The Red is in total contrast to that with every song refusing to let go of you. You get lost in the music for the full 45 minutes and in a way you kind of wish the experience would never end.

Full review of HEADS FOR THE DEAD - Into The Red can be found here.

HEADS FOR THE DEAD is: