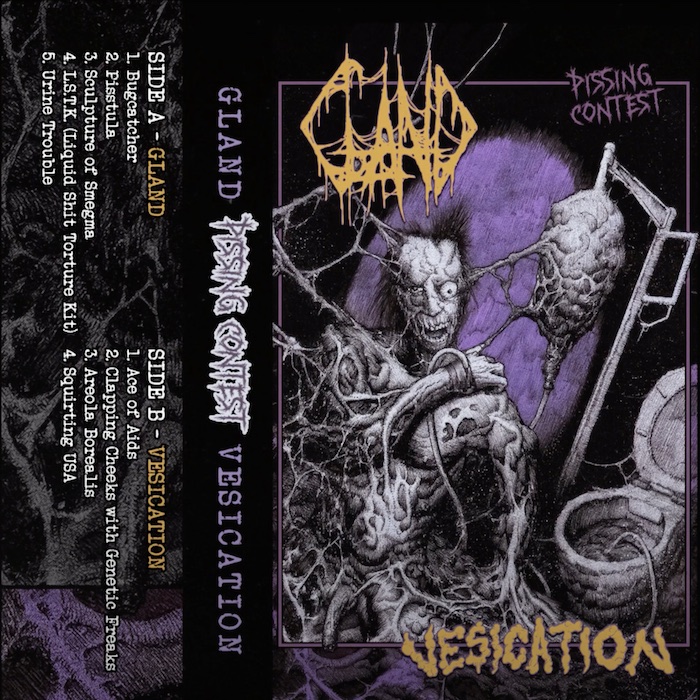 As a region of Canada that's known more for beatdown HC and deathcore more than old school deathgrind about bad sex, strange bodily fluids and the mysterious phenomenon known as Areola Borealis, this is a welcome surprise that you should be shoving into every orifice as soon as you get the chance.

Vesication is the old fart among the two, having formed in 2008 with two full-lengths and a slew of EPs to their name ("EP For My Bunghole" made me audibly chuckle). Their lyrical themes, as you can probably tell, are hilarious and ridiculous, but it's supplemented by surprisingly competent musicianship. Geoff Hodsman's palette includes a mix of beefy skank beats and grindcore blasting that's straightforward but well rounded in its approach, and the riffs follow suit with a surprising amount of groove and meat. It's got the boisterous fun of something like Holy Cost but with a tad more thrashy OSDM vibes. You'll be giggling like a schoolgirl at their song titles and lyrical themes, and then seriously getting down with the riffs.

The song they're dropping today is another gut-buster titled 'Areola Borealis' complete with the Superintendent Chalmers sample (except "aurora" is replaced with "areola"...this is peak comedy right here, people). It's the midpaced groover of their side, with Matt Hilden's vocals smearing a wet, pronounced pus over bouncy, punky riffs, with a tasty blast section in the middle. It's only a couple minutes long (including the Simpsons sample) and only has a couple of distinct sections, but Vesication can get a lot of mileage out of simple ideas. The production on this is also hefty as fuck - the vocals are super loud, but somehow it doesn't overtake the riffs, and you can easily hear every little detail.

The other side of this split belongs to Ottawa's greasiest smegma snackers, Gland. They're the younger, tighter butthole of the two, having formed in 2017, and their sound is similarly more spirited and zippy with the same amount of disgusting degeneracy. Instead of bouncier, Impetigo-styled filth, Gland goes for a sharper, aggressive approach along the lines of old Carcass and Impaled. The riffs aren't going to blow the doors of originality off their hinges, but they always get your blood pumping and head nodding and go exactly where you want them to - predictable in the best way possible.

Vocalist Zac Murray narrates the whole experience like some sort of deranged serial killer storyteller, with a certain narrative flow to his vocal pacing, and drummer Hunter Breen has all the tasty blast goodness you need in proper deathgrind - the best part about the Gland live experience (which I've been lucky enough to witness) is watching Breen pummel those skins like a madman with a shit-eating grin on his face the entire time. It's hard to go wrong with lyrical themes like making a tower out of your own dick cheese, torturing people with enemas, or catching STIs like they're Pokemon (the theme behind the track we're premiering today). Nothing like having wholesome lyrical content to grunt along to while you choke your chicken with glee.