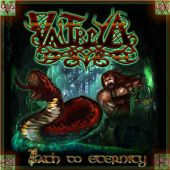 The half a year of cold climate in Canada is harsh, yet so beautiful as well. Guess that is why my country seems to be perfect for Viking Metal. We have been having an explosion of Viking Metal in the last little bit, seemingly we have a lot of Scandinavian blood in our melting pot of people - I guess. One of the newer acts that really are impressive in this eruption of the whole Canadian Viking Metal is Montreal’s Valfreya.

With one of the most amazing female vocalists that can do both the sweet clean vocals to the nearly Black Metal growls that fit perfectly with their aggressive style they seem to reshape the whole Viking/Folk Metal and mould it into something that it should have been years ago. You cannot ignore this metallic force. Heavier with less acoustic instruments, Valfreya brings Viking Metal even closer to Metal, and the results are going to be a classic.

I was enthralled by every track as the album spun a few boisterous tales of great battles and folklore of the seafaring Viking on their way to conquer all. Shedding lots of blood and celebrated with drinking ale in victory along the way. From the bone crushing havoc of 'Deity’s Grace' to the more haunting ending to the album in the epitaph 'Glorious Death', I finaly found my version of true Viking Metal - and they are Canadian.

Valfreya may not be the way that VM is normally, but to me this is what it should have been like since the beginning. Scandinavian lore is the base inspiration for this massive metallic movement, but Canada has started a side movement to take it in the right direction... more metal, less folk and pure Viking magic.

Raise a mug of ale and add in the horns with the other, gather in the longhouse in Vanhalla and salute the next thing in Viking Metal, ones who battle heart is pure and willing... Valfreya.