Swedish death metal veterans Unleashed are back with a pretty strong beast called "No Sign Of Life". It's the 14th album they released within the last thirty years, remember "Where No Life Dwells" just became 30 in May. All trademarks that we are used to know by the quartet are still to find and, in my opinion, it is one of the strongest releases by them for many years. I took the chance to ask Johnny Hedlund some questions about the album and furthermore plans via email. 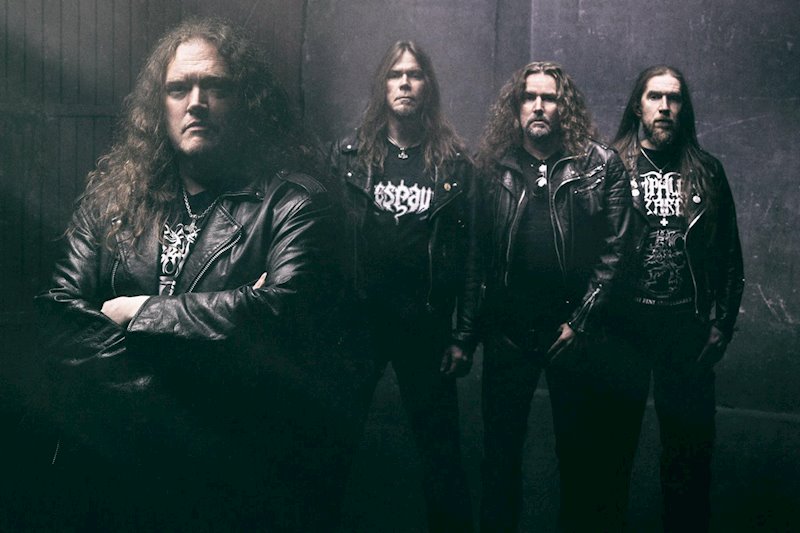 Hi Johnny, thanks for taking time for the interview. How are you doing?

I am doing well thank you! Things are moving along very well with the new album.

I was pretty surprised when you announced a new album in late August. You had no announcement that you are going to the studio or anything else. How long did you plan to do so? Was it spontaneous?

I think we did post something about the studio although perhaps not when. We worked in the studio in different time frames which is the benefit of having your own studio really. So, it isn't just 3 weeks and then it must be done, which is really good.

I wrote in my review that "No Sign Of Life" isn't as guitar solo oriented than its predecessor "The Hunt For White Christ". The melodies come more from the arrangements itself so that it doesn't appear so bulky. Would you agree with that? And how did the songwriting work during the pandemic?

The song writing process has been the same for many albums and many many years now. And the pandemic didn't change that at all. I don't know if the arrangements are bulkier on the previous album, but I like both of them for what they are. It is no surprise I always like the newest album the most. And I always did.

Nevertheless, the solo on 'Midgard Warriors For Life' is really overwhelming. How did you come to this idea? I guess that is one of the best guitar solos I've ever heard from Unleashed.

Well thank you so much. I will tell Fredrik that. I guess he should have answered this question then because I also wonder sometimes where the hell he gets his ideas from, haha.

On "No Sign Of Life" you continue the story you started on "As Yggdrasil Trembles". What can you tell about the plot that is happening this time?

OK so in the end of the previous album, the Midgard Warriors won a big victory by the western wall in Jorsala (present day Jerusalem). As White Christ and so armies fled into the Sinai Peninsula, the Midgard Warriors decided to keep persecuting them into the great desert. That is where most of the events of this album take place.

What do you think – for how many albums will the story still continue?

Haha… I just won't tell you that. Well, first off because it will depend on if the band really wants it to continue. I suppose well have to wait and see. That's the best I can do, sorry. But the storyline from the book is far from finished.

Are there some tracks on the album that don't depend on the story you are telling?

No they are all in the storyline.

The album closes with 'Here At The End Of The World'. In these days it is really a quite matching title when you take a look at all the shit around us: an endless pandemic, growing armament and the destruction of environment. Did you choose the title with having these things in mind?

Well then it is a good thing that the environment actually is getting better in the past 20 years or so. I don't think there have ever been this few poor people in the world and starvation is not at all as widespread as let's say 30 or 40 years ago. People live longer and the general health is improving all over the world. So, things actually do get better. There are many things that can improve, that's a fact but everything isn't just pitch black. And no, the new album No Sign Of Life has nothing to do with the popular world news of today etc. It is about a future story of the world of Odalheim. Events quite far from ours in this present time.

Through all these years you never let down the Viking topic. What makes it still that interesting for you?

I am writing a book about this now but for sure the Viking Traditions and values are a way of life to me. And I don't know a better one. There are values that are so important to life and the way I like to lead my life that I wouldn't have it any other way no matter what. If you think about things like the meaning of life, why we live, how we live etc. These things I find answers to in the Viking tradition. At least that works for me. I don't know if it works for others but for me that is how it is.

This year your debut album "Where No Life Dwells" celebrates its 30th anniversary. Of course, nothing big could happen in 2021 but do you have any plans to catch up some anniversary shows next year?

No I don't think we will. I think the priority now is to (best case scenario) play all the shows and festivals that were postponed during the pandemic. At least that is my hope as we speak.

A lot of Swedish death metal albums premiered about 30 years ago (Dismember, Grave, Entombed, Hypocrisy in 1992). Isn't it time for a new tour with at least Dismember and Grave (Entombed may be quite difficult of course…) – I saw you in 2006 in Essen and that billing was awesome!

Aahh. Well, we'll see, you never know haha. It was a good tour for sure. But things are different today. Perhaps it is more difficult to arrange nowadays.

These days are a lot of newer bands that copy the Swedish death metal style – what do you think about them?

Well I don't think that could be a problem really.

Are there some albums that were released lately which you can recommend to me?

I really dig the new Eclipse album "Wired". The new Thundermother is great too. Heavy metal though if you like it pure and strong.

Finally, I read that you are a huge ABBA fan. What do you think about the new album? I think it is great that even such a big band "borrows" ideas from their older releases, haha!

Oooh I wonder why that keeps following me. I am not a huge fan of them.

Well, I hope that we can meet in the future on tour, thanks a lot for the interview!

I hope so too. Thanks for the interview and your support! Hail Odin!