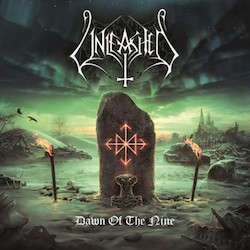 Type: Full-Length
Release Date: April 24th, 2015
Label: Nuclear Blast
Genre: Death
1 A New Day Will Rise
2 They Came To Die
3 Defenders Of Midgard
4 Where Is Your God Now?
5 The Bolt Thrower
6 Let The Hammer Fly
7 Where Churches Once Burned
8 Land Of The Thousand Lakes
9 Dawn Of The Nine
10 Welcome The Son Of Thor!
MetalBite on YouTube

Welcome to the clearly structured poetry of good old Johnny Hedlund. On the one hand, his world is full of "unleashed hammer battalions", "immortal armies" and "simple but honest people", on the other hand we have this goddamned Christianity that kills the origin culture of the once innocent Vikings in the most perfidious manner. Nice to know that things can be so easy. Do not get me wrong, I am not intending to reject this tradition-conscious approach completely. Yet in times of Islamist terror attacks, I am quite unsure whether these lyrics are still up-to-date. Maybe it is time to reject old enemy images. Anyway, Hedlund and his comrades are not known for their flexibility. And, to be honest, that's not a bad thing. With regard to Dawn Of The Nine, Unleashed present themselves one more time as a reliable partner for their supporters. Experiments, surprises or innovation? You must be kidding. I am speaking about Unleashed, the unpretentious, non-pompous Swedish genre flagship - and I believe that the majority of their loyal fans does not want to be confronted with anything else but generic death metal.

The full-length shows the typical picture of the Scandinavian marathon runners. Some mid-paced pieces attack intransigently, fast outbursts like 'They Came To Die' add a spicy flavour. The upright four-piece has been in the business long enough in order to create appropriate genre tracks and the experience of the musicians shimmers through every composition. 'Dawn Of The Nine' is another work that gives the lie to all those who say that progressive song patterns are indispensable for the creation of an interesting record. Unleashed illustrate once again that more or less conservative schemes can work sufficiently well. Moreover, the sound of the album finds the right balance between density, massiveness and transparency. One can blame Nuclear Blast for many of their actions, their flamboyant advertising, the collaboration with grotesque jumping jacks such as Sabaton or Sonata Arctica and their missing company profile, to name but a few examples. Yet it cannot be said that the enterprising Germans are well known for low budget productions.

Dawn Of The Nine sounds neither totally fresh nor does it indicate that Unleashed should call it a day. The album belongs to these numerous works that impress with a strong beginning and fail to keep the level until the end. Both the death and doom combining title track and the closer enrich the output rather in terms of quantity than in terms of quality. Nevertheless, the vast majority of death metal fans will find a couple of tracks that will make their day. In my humble opinion, the partly apocalyptic 'Where Is Your God Now?' with its hovering guitar lines between verse and chorus or the uncompromising 'Let The Hammer Fly' stand out, but the two openers also should not be left unmentioned in this context. So what does this all mean at the end? Well, the four musicians play their parts very professionally. The solos and the further instrumental parts shine with coherence, the melodies do not lack of robustness and Hedlund's vocals appear as strong as ever. Dawn Of The Nine is a resilient, very solid album and its best songs can more or less compete with classics such as 'Onward Into Countless Battles' or 'To Asgaard We Fly'. ('Before The Creation Of Time' remains naturally unaffected.) But is it a necessary album? Decide for yourselves.