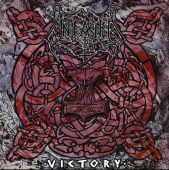 Rasping guitars kick off the fourth full-length of the Swedish death metal institution and the shortcomings of Victory become obvious in a matter of seconds. Unleashed present a dragging one-tone-riff which does not sound bad but slightly uninspired and its only individual characteristic is the staccato design. Openers should be more or less representative for the entire work and Juohnny Hedlund and his comrades have internalized this principle. But this is exactly the problem of Victory in view of the acceptable yet somewhat stale 'Victims Of War'. Okay, the guy of the German Rock Hard magazine was writing about "the ultimate Unleashed album", but this crude fanboy could not be taken seriously.

Tracks like 'Hail The New Age' or 'The Defender' have it pretty cushy as well without reaching the "hit factor" that characterises their former hymns such as 'The Immortals'. Primitive, predictable song patterns and a significant lack of combativeness result in simply boring parts, although the songs do not shine with opulence. Even the comparatively large-sized 'Precious Land' does not suffer from overlength, but its five minutes are really hard to endure. The band celebrates itself, its origin and nature, but nothing happens in terms of music. A minimum of standard riffs are offered at a snail's pace. Odin, help them! But I fear this old geezer falls victim to a short nap as soon as the slow motion riffs set in. Enviable!

Due to whatever reason, occasionally Unleashed break out of their tiring scheme. 'Scream Forth Aggression' shows that the guys still know how to write exciting speed tunes. The guitars provide pressure, the drummer is unleashed and even Johnny's voice shines with a proper amount of belligerence. Double bass attacks and sharp riffs ensure that the listener awakes from her or his coma. Well, this might be not fair. With the exception of real downers like the aforementioned 'Precious Land', Victory can fairly rely on solid ('Berserk'), sometimes furious ('Revenge') songs. Nevertheless, the guys were not kissed by inspiration during the making of this album. Really exciting ideas are missing, everything is held simple, or, to be honest, overly simple. The playtime of 34 minutes also does not indicate an overkill of creative thoughts.

Across The Open Sea delivered very catchy songs that had nearly a pop appeal and perhaps the band had the intention to turn the clock back, at least to a certain extent. Thus, the material is reduced to the essentials and does not put the focus on catchiness. But penetrating power, vehemence and rigidity are missing. What remains is nothing else but a mediocre album with a slightly dull and lifeless sound. Please do not ask for infectious or stimulating parts, because they are a rare asset here. The once furious group acts like exhausted craftsmen, not like ambitious artists. Therefore, I guess it's time to leave Victory to its own devices.