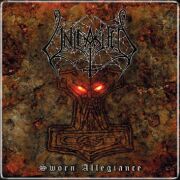 Type: Full-Length
Release Date: July 26th, 2004
Label: Century Media Records
Genre: Death
1 Winterland
2 Destruction (Of The Race Of Men)
3 Only The Dead
4 The Longships Are Coming
5 Helljoy
6 Insane For Blood
7 I Bring You Death
8 Attack!
9 CEO
10 One Night In Nazareth
11 Praised Be The Lord
12 Metalheads
13 To Miklagård
14 Long Live The Beast
MetalBite on YouTube

Since two and a half decades, Unleashed plough through the incrusted soil of death metal. Thanks to their (slightly overrated) debut, they accelerated from zero to one hundred in a matter of seconds. During the following years, they released tons of good songs but although a few albums that failed to reach their high standard. These albums were the direct predecessors of Sworn Allegiance so that the here described album came as a pleasant surprise. It showed an inspired band that celebrated its second coming. Unleashed had regained its once infectious energy and this circumstance resulted in a lot of absolutely amazing songs. But before I deal with the tracks in detail, let us have a look at the production. The powerful, sometimes rubbing guitars and the natural drums provide the foundation for Jonny Hedlund´s voluminous voice. As usual, his vocals do not sparkle with variety, but he does his job with devotion and makes his voice heard in a courageous manner. I like his style of singing because he does not belong to the "I can only growl" category. In short, raise the horns for the technical implementation of the 14 numbers and enjoy the sound.

Now it is time to exercise carefully the song material. Of course, Unleashed do not betray the Gods of death metal and complexity is still an unknown component to them. Yet they are not primitive. Painfully simple tunes like "The Immortals" do not occur. Speaking of simple things, let me draw a veil of silence over some of the lyrics. For example, "CEO" is overloaded with imbecile clichés so that my last brain cells (the ones that survived my headbanging sessions during the eighties) want to commit suicide. Furthermore, lines such as "I only fuck the dead" do definitely not belong to the most poetic works ever. Apart from that, one can only say that shit happens, Mr. Hedlund; I have a different conception of a fulfilled sex life. But I wanted to inform you about the songs themselves. Unleashed bomb us with a mixture of rapid and mid-paced songs that show the ingenuity of well executed Swedish death metal. The high-speed tunes conquer your auditory canals without any detours. Catchiness, aggression and dynamism meet on an equal footing. This results in unfussy highlights like "Destruction (of the Race of Men)", "Attack!", "Praised be the Lord" or "Long Live the Beast". Exactly this way of proceeding was missing on Warrior and Victory. These songs bring back pleasant memories of the fast-paced classics of their first outputs while sweeping away the vapid aftertaste of the boring numbers of the aforementioned works.

Their mid-tempo songs are not generally weaker. Inter alia due to its Viking lyrics, "The Longships Are Coming" is 100% Unleashed and shines with good riffs and drilling solo guitars. "To Miklagård" marks another successful example of the combination of historical lyrics and a more or less sedately rhythmic approach. Anyway, due to my universal affinity for high velocity songs, I prefer the more rapid outbursts of the album - an album that does not suffer from any serious defects. Admittedly, the grain of unpredictability is missing. But with regard to tradition-conscious bands in general, this is a widespread problem and no big deal. To have the "right" attitude is of higher value. Additionally, no throwaway composition damages the flow. The 45 minutes appear as exactly the right length. For the vast majority of death metal maniacs, this time is well spent. Coherent songs have right of way and any kind of technical ecstasy must wait. It sounds rather ironic, but the rediscovery of their roots pushes the band forward.