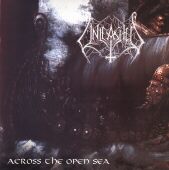 Type: Full-Length
Release Date: 1993
Label: Century Media Records
Genre: Death
1 To Asgaard We Fly
2 Open Wide
3 I Am God
4 The One Insane
5 Across The Open Sea
6 In The Northern Lands
7 Forever Goodby (2045)
8 Execute Them All
9 Captured
10 Breaking The Law
11 The General

One thing is for sure, the entire discography of Unleashed shows blatantly that the persistent Swedish horde has never put the focus on high sophisticated techniques. Simplicity seems to be a value in itself, for better or for worse. But Across The Open Sea carries this feature almost too far. Death metal and pop appeal seem to be mutually exclusive, but back in 1993, Unleashed proved the opposite. Some songs are almost painfully predictable, but against the odds, this does not mean that they lack quality. Good songs are good songs, regardless of the number of breaks or surprising twists and turns. And by the way, an earworm always takes the direct route.

Anyway, especially the mid-harsh, rather slow-paced tracks like 'The One Insane' seem to be the perfect background music for the local supermarket: "I am the psychopath, I live in my own world, I buy garlic butter" - guess this could work without scaring anybody off. Unleashed do not have an ingenious strategy. They just rely on the effectiveness of their riffs and indeed, the guitars add the necessary number of rough edges. 'Execute Them All' points in the same direction. Everything stands or falls with the quality of the guitar work - and 'Execute Them All' does definitely not fall. Lead vocalist Hedlund is able to press a malicious touch into the miniature chorus and the strong riffing expands the catalogue of hymns of the Scandinavian quartet.

Believe me, there is nothing new to discover after having listened to the album for the first time. Just listen, inhale everything and decide whether you want to hear the album again. My recommendation is clear: do it. A beast like the dragging, scornful 'Open Wide' shows its teeth impressively and its counterpart, the furiously raging 'Forever Goodbye (2045)', also hails from the path to the death metal Olympus. With the exception of the feeble title track (filler alarm!) and the nonsensical cover version, every number adds value to the full-length. Some more (for example the catchy opener), some less (the pretty complex closer - "complex" in the context of this album... oh my God!), but the song formula is simply too primitive so that no one is able to execute it insufficiently, not even Johnny Hedlund!

Is Across The Open Sea a masterpiece or does it have an outstanding production? No and no again. It just holds pretty decent consensus metal that tends towards death metal, but I am not sure whether hardcore death maniacs really accept such an album. From my point of view, a song like 'In The Northern Lands' enriches the album, inter alia due to its slightly eerie note that the guitar contributes during the instrumental middle part. Yet the death metal scene police will probably have a different opinion when faced with this nearly relaxed number. Anyway, Across The Open Sea combines a solid production with unspectacular yet mostly unerring sounds and the integrity of the formation cannot be doubted. I will not tell my still unborn grandchildren about this work, but I appreciate to listen to its best songs every now and then.