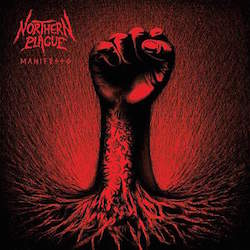 A debut to be proud of! A solid piece of death - black metal. Realization gets a very good rating to say the least, but how else could it be if it was touched by fingers of Arek "Malta" Malczewski (recording part) and Wieslawski Brothers of HERTZ studio (mastering). They’re a young band from a small town (Czarna Bialostocka) in eastern Poland, who jumped on the wagon of conquerors of the West appointed by Vader and Behemoth. With this debut they knocked strongly on to the gates of hell. It seems they took lessons of image and scenic behavior from Vader, but musically they ooze fascination of achievements of Behemoth. The fascination can be clearly heard on Blizzard Of The North EP. Manifesto still resonates in some parts of this infatuation (the beginning of the disc, some drum parts and solos), but overall - this is already a completely different being. The whole disc is maintained basically in mid tempos, but appears to accelerate on the “Reign Mother War” or “Words Unclean”. As I have said before, we are faced with a juicy, dripping with blood death metal shrouded in black metal fog. The reek can be felt the most in a slowest piece “Let The World Burn”. Technical abilities of the whole four also deserve recognition.

The album is definitely worth checking out and even though it doesn't strike you with originality, it is downright fucking solid. It burns with youthful charisma, and the tenacity with which those blokes push forward allows to hope it will be continued. If they will maintain the pace of musical development and adversity will not throw them on some sort of creating slump, it may get interesting.