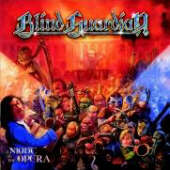 After seven studio albums, Blind Guardian releases their eighth and highly anticipated release “A Night At The Opera”. After the bands monumental 1998 release, “Nightfall In Middle Earth”, everybody has high expectations for the band. Some hoping the band will not do the same highly orchestrated rich vocal harmony style as the bands previous album, some wishing the band will progress with their recent style and continue to develop it, and some people just love everything the band puts out. With four years between albums, it has certainly done a lot for the bands abilities. “A Night At The Opera” is the band continuing their previous efforts but still progressing in many different areas.

When I got my hands on a copy of Blind Guardians EP “And Then There Was Silence”, it took me a few listens to really grasp all the elements of the music. The rich vocals harmony’s, the grand choruses, the epic atmosphere, etc. After I scratched the pretentiousness of “And Then Their Was Silence” and “A Night At The Opera”, I started to begin to enjoy what I was hearing. I’ve always been a fan of the bands earlier material such as “Tales From The Twilight World” and “Imaginations From The Otherside”, but the direction they’re heading certainly is an improvement in many aspects.

The structure of the individual songs and the entire album is just fantastic. The songs absolutely keep the listeners attention fixated on every detail of the album. Unlike earlier Blind Guardian, the guitars are not really the focal point anymore. The vocals play a huge part in the songs, as do the keyboards, drums, bass, etc. Everything here plays a crucial role in making the songs seem complete. Hansi’s vocals definitely are the strongest they have ever been, and really help define the songs and their epic atmosphere. The guitarists Siepen and Olbrich still know how to shred, and they show this on songs such as 'Sadly Sings Destiny', 'The Soulforged', 'Punishment Divine', and others. Thankfully, they do this intelligently and not just in a manner to show of their abilities. The guitars are much more refined and take part as the foundation on which the songs are built up on, instead of playing the leading role. The drums of Thomen Stauch are very well done and he is certainly underrated. Overall the album is done very well and there aren’t very many weaknesses among the band mates or their ability to compose.

Overall there is something for everyone in this album. For people more fascinated with guitar work, it’s still here. If you want something epic and grand, with a fierce atmosphere then you won’t be able to miss it. If you’re looking for a little melancholy or ballad work the band has been known to do, it’s got it’s got something here for you also. Best of all, everything has been done to the best of the bands ability and that can’t be denied. This is where Blind Guardian are and this is the where Blind Guardian are headed, so either enjoy it or forget them.

So I’ve told you about the album, but I’ve got some problems with it. Firstly, it just comes off as really pretentious. It’s just something you have to get used to, but it’s definitely not a good thing to have surrounding an album. Secondly, many of the tracks on this album give a nod to another track on the same album. Many ideas are used on other tracks, which may make it seem a tad repetitive at times. Lastly, the emotion of it often seems fake and manufactured. Just doesn’t seem sincere and natural to me all of the time. I like the emotion of the band to be pure and stripped, like 'Imaginations From The Otherside' and back. So, with all that said I must say that the standout tracks really stand out, and 'A Night At The Opera' has more than its fair share of outstanding parts and ideas.

Bottom Line: An excellent follow up to 1998’s “Nightfall In Middle Earth” that showcases the band’s abilities at their highest. Whether or not you like what you hear is up to you, but I suggest everybody to give the album a fair and unbiased listen.