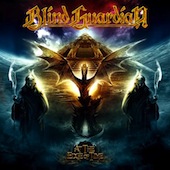 Type: Full-Length
Release Date: 2010
Label: Nuclear Blast
Genre: Power
1 Sacred Worlds
2 Tanelorn (Into The Void)
3 Road Of No Release
4 Ride Into Obsession
5 Curse My Name
6 Valkyries
7 Control The Divine
8 War Of The Thrones
9 A Voice In The Dark
10 Wheel Of Time
MetalBite on YouTube

Prior to the release of this album the single A Voice in the Dark certainly raised expectations. The metallic ruthlessness of that track, which harkened back to the aggressive yet dynamically precise spirit of the Nightfall in Middle-Earth, really gave this listener hope that the over-produced and bloated styling of the last two albums had been kicked to the curb in favour of more a more vital and energetic approach. Maybe it was hope after seeing such a great band drift in the direction of irrelevance, but whatever it was this album doesn’t restore the faith in the way I’d hoped for.

Sacred Worlds, the lead-off track, wasn’t actually composed for this album, rather a video game soundtrack. Curiously the band decided it would be a fitting opener, orchestral sections were glued to it and it was glued to the track-listing. Odd for the band to do this because even with (or perhaps, because of) the orchestral additions it seems more like a song unto itself rather than part of a greater work. This is pretty much symptomatic of the greater issues with the album, the tendency to overdo things and lose focus of the larger picture.

The album doesn’t really kick into gear until Road of no Release (sneaky reprise of the closing piano part from The Eldar) which is somewhat subtle in its delivery, snaking through a variety of riffs and tempos to build up into a fantastically drawn out chorus. Subsequent tracks, however, see layer upon layer of orchestration build up and for all the coatings the overwhelming feeling is that underneath it all is not a great deal of anything. That’s not to say there aren’t good ideas; for instance at its heart the folksy charm of Curse My Name is quite endearing, but it overextends itself with synths and vocal layers into oblivion.

It’s not really until A Voice in the Dark that all the layers of gloss are stripped back and the heavy metal beast is revealed. The precise and energetic riffs spin out of control and Hansi’s vocals are unleashed to their full glorious extent, something that was sorely lacking up until this point. The passion in the delivery is breath-taking and in the context of previous tracks so desperately needed, to the point that the five and a half minutes don’t seem to be nearly enough. Then the album closes out with Wheel of Time, a track that manages to convey cinematic overtones around a much more solid framework, a fine closer that really throws out some tidy riffing and dynamic flow.

Whereas the previous two albums just felt like so much hot air, this one is so much more frustrating a collection to listen to. In amongst all the overworked fluff there are some ideas that could have been a part of good foundations instead of being used to prop up all the pomp. There is clearly still creativity and passion on display here, but somewhere in the process it seems to have mostly been drowned out by the little bit here and the little bit there that got draped around it.