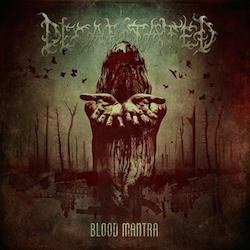 I have been waiting a long time for this album. Unlike a lot of people, I didn't have any problems with Carnival is Forever even though most people I've talked to don’t really care for that album. And I admit, when I first got it, I gave it a few uninspired listens, then just put it on the shelf and forgot about it. Not quite sure what prompted me to pick it back up a year later and give it another spin, but when I did, I found myself not listening to anything else. Over time it really grew on me, to the point where I prefer it to previous Decapitated albums.

So to be perfectly honest, I was hoping for more of the same, and Blood Mantra pretty much does just that. However, it does it far better than I would have expected. This is going to sound like blasphemy, but I think this is now my favorite Decapitated album. Why? Because I see it as the band finally matured and found their feet, their own style. While Winds of Creation (while being the great album that it is) was pretty… how do I say this... it sounds like it was written by teenagers, which it was.

Decapitated are much further into their careers now, and yes, it’s like a completely different band. Gone are the speedy, death metal sections in favor of more rhythm driven guitar playing. That’s not to say that this album doesn't have an abundance of great riffs on it, because it does. It’s just that the style is so different it’s completely silly to even compare the old and new Decapitated. Anyway, onto the what really matters: the music.

The album kicks off with “Exiled in Flesh”, before launching into “The Blasphemous Psalm to the Dummy God Creation”, and I must say, this is exactly what I was wanting to hear. Untraditional guitar work, excellent drumming, and just a rhythmic powerhouse. I was a tad disappointed when Krimh left the band, but new drummer Mlody appears to be doing a damn fine job.

The production and sound on this album are worth nothing. It’s pretty similar to Carnival is Forever, but meatier, with thicker, angrier guitars. Vocals are nicely laid in the mix, which is a good thing, as I have no problems with Rafal’s style, he fits the music perfectly. Someone like Sauron would just not complement the music well, and as I have said before, that’s all in the past now. The drums and bass are nice and clear, nothing too exceptional or flashy here, they just do their jobs well and serve the songs the way they are meant to be served.

The title track is just an absolute monster, it just oozes greatness and class. That opening riff is killer. The verse riffs are killer. The breakdown at 3:56 is killer. The band are in top form and at this point they’re just knocking it out. This is some seriously heavy and addictive song writing. “Nest” sees Vogg taking an even more rhythmic approach to guitar playing here, but not in the Meshuggah sense really, though I could see how some people could find similarities, even though to me the two bands sound nothing alike.

What really kicked me in the face was “Instinct”, probably my favorite song on the album. The riffing is just masterfully crafted, and you can tell that a lot of work and care went into this song. Not just the riffs, but in the arrangement as well, which is what truly makes it shine. The breakdown at 3:34 and the section which follows right after is probably one of the best things I have ever heard from Decapitated. “Red Sun” gives you a bit of room to breathe before delivering the final blow in the form of “Moth Defect.”

I've heard some people accuse Vogg of abusing the low E string and calling them nu-metal. Either those people have dicks lodged firmly in their ears or have no idea what they are listening to. Too much chugging? Abusing the low E? May I point you in the direction of “Spheres of Madness”? That’s what I thought.

Overall, I was very impressed by this album, and I had set the bar quite high, even though I tried not to, so I wouldn't be disappointed with the end result. But disappointed was the last thing I was, as this is a serious slab of just straight up, quality metal. The boys from Poland are on top form, and this is not to be missed.