Decapitated is not a band that needs to be introduced and same thing goes for its front man Vogg. I got a hold of the man himself and we talked about the latest album 'Blood Mantra' getting such a great reviews, lineup changes and some other things in between. It wasn’t a long talk but I’m hoping to continue after the show next week, till then this is what I got. 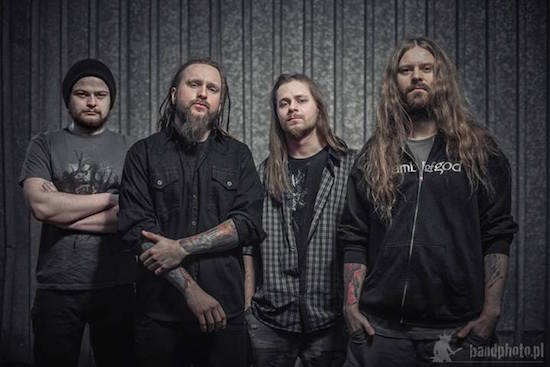 Wassup Vogg! You're on the road again, do you still like it, do you still have fun or is it more like a job and fun only somewhat happens; or is it both?

Hey Tom, I have to say that despite these 20 years of playing in the band we do not ever mention boredom or routine and I hope it will never happen. I love what I am doing; I love to tour, to be in the studio and play guitar. This is what I dreamed of my whole childhood and now I can do it and live off of it. I can't wait for upcoming concerts.

This year was really super cool for us. We toured with freshly released album Blood Mantra, did a lot of concerts and, above all, a lot of great festivals. We played on the Woodstock Festival in Poland where more than 500 thousand fans watched us and this is quite possibly the biggest music festival in this part of Europe. Large achievement was also playing at alternative music festivals Off Fest and Roskilde. Besides that we played two cool tours in Poland called Blood Mantra Polish Tour and that was THE biggest turn-out in Decapitated history. The only negative thing was the cancellation of the tour with Soulfly and Soilwork in the United States, by not getting permission for work within the time limit.

What was the most important thing that happened to you or things if there were many that you consider worth mentioning?

I guess it would be being a father of two beautiful daughters; the rest is just an accessory (laughs).

Which tour from last year did you enjoy the most, which country would you go back to, to what place would you go right away if they would call tomorrow morning?

I love to play everywhere; it's hard to tell about this one particular place. I liked it a lot in Australia, super people, cool concerts, I have fond memories of Africa as well, but also I love to play in Poland, where we have more and more devoted fans.

There were many bass players before today. How's the new guy; how is he handling you guys and is he a permanent member?

New bass man is a nice guy and a good musician for the time being. The time will show whether he'll stay on the right side of the force or if faith shows him a different path. Wait we must (laughs).

I haven't had the chance to see the new drummer just yet and now the new bass player is in Decapitated ranks (brand new rhythm section for me to checkout) communication and timing ok between those two?

(Laughs) new drummer is the beast who is really a good musician and a great friend. He progressed incredibly over the last two years and he's still developing. He contributes lots of good energy to the fold which resonates positively with the rest of us. You will have the opportunity to check those two out during our next tour in the U.S.

I've seen some pics of you guys in the rehearsing space, is there any new material ready, maybe some in the works, any surprises?

We started to work on the new material recently. I've got ideas for a couple of songs and I think that once again it will be a step forward in the development of Decapitated. I cannot wait for the material to become a satisfactory form. Certainly, it will be powerful and energetic, plus this time I want to put together a little more melodies.

You got new blood in the band, are you still the only one composing new material for Decapitated or is there room for ideas from the rest of the guys?

I'm still the main composer in Decap, at some point Vitek was also responsible for making music but since he is not with us anymore I have to handle it alone. I'm open to other musician’s ideas, I'm very critical though but if someone brings a good patent to the practice then why not, I'll let them in into the creating process.

I've heard many different instruments being played on metal records, you play an accordion and yet I don't remember hearing it on Decapitated records, or did I and I don't even know about it?

If you've heard our last album, it means that you've heard the accordion on the Decapitated album. There's really a lot of it on there but most people don't have a slightest idea that this is it. The beginning of the first song on the disc is an accordion. I've also used the instrument as sampler (laughs) that highlights different accents, add-ons and such.

Out of curiosity… which song from the last album are you most proud of, why?

I think it's Blood Mantra. I was looking for a really catchy riff and I think I found it. I worked sooooo long on this riff to make it perfect. I love to play this riff live because no matter where we play, it always sounds great.