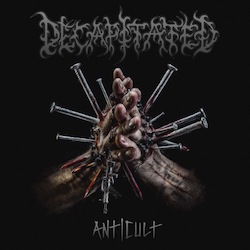 So here we are with another Decapitated album, a band a lot of people have come to give a hard time ever since the unfortunate and untimely passing of late drummer Vitek. So, before I start the review I want to clear up the air a little bit.

Yes, this new Decapitated isn't really anything like the old one. But that's the thing - it doesn't have to be. What I think that a lot of people don't understand is that people change with time, music changes with time, everything changes with time. To give an artist crap about not sounding like they did 10-15 years ago is just not realistic. It's actually just downright childish. It shows that you actually have no idea what progressing as a human being or musician is. How many of you are still listening to "Reign in Blood" every single day?

I get that some people don't like Decapitated's new sound or style, but I love it. And you know what? If Vogg and Decapitated like it, which they obviously do, since this is what they want to write and play - then that's all that matters. You either like it or you don't - both is fine. But there are going to be people coming here bashing them simply because it's not Winds of Creation or Nihility. And that is not the correct way to review an album.

So, it's been three years since their last effort, Blood Mantra, and the boys from Poland are back with a bang. The lineup is pretty much the same, however the band welcomes new bassist Hubert Więcek to the fold. But let’s face it, were all here mostly because of Vogg.

One of the best guitar players in metal, he really does shine throughout this album. If you like the style or not is irrelevant - the man can play, and here he once again showcases some amazing rhythm and lead guitar work. He's backed up by Młody on drums, who does a consistent job, if a little dull. There's nothing wrong with the drum work, but I would have liked to have seen some more variation. That said, the drums sound great, and the playing compliments the songs well.

The album starts off quite nicely, but it really picks up the pace with "Kill the Cult", which has some immense riffs and an outstanding arrangement. And after that, the album never really loses any momentum at all, they just step on the gas and run right over you. "One-Eyed Nation" is pretty old school Decapitated - it wouldn't be out of place on say, Organic Hallucinosis. Nice, thick and crunchy, with stellar riffs and a mesmerizing groove. "Earth Scar" in particular, is just downright amazing. The arrangement, sound, the chunk and feel are absolutely top notch. There is one riff at 2:15 which is one of the most impressively crafted riffs I have heard in a very long time, structurally speaking. Outstanding stuff really, no one else quite does it like Vogg does.

I think a lot of people hate on Decapitated now because of the vocals. I can see that. Personally, they don't bother me as they fit the music - a guy like Sauron would totally sound out of place here. Could Covan pull it off? Yes, he could, and maybe I would prefer that. But we don't always get what we want, and honestly the music is so good that I could not care less about the vocals or lyrics (the lyrics are pretty bad, by the way) All that said, people need to give Rafał a break. For the style he sings in, he does a superb job. I see absolutely nothing wrong with the vocals as once again, they fit the music well, and it's appropriate for this style.

The sound and mix on this album is one of its best features. To me, this is what a modern metal album should sound like. Thick as fuck, crunchy guitars with shitloads of gain yet still clear - Vogg has managed to capture one of the best rhythm tones I have heard in a long time. That Ibanez Iceman 7 string sounds like a fucking monster here. Drums are loud and clear, and not too clicky, thankfully. Bass is always present and can be heard loud and clear, even though Vogg's wall of amps and gain.

For me, this is fucking great, and one of the best releases of 2017 so far - right after Benighted for me. The guitar work is creative, catchy and heavy as a small fucking country. It's good to hear Decapitated back with an effort this strong, and I only wish people would put aside their biases for a few minutes and actually try to enjoy it for what it is. I've even heard some people say that they wouldn't sound like this if Vitek was still around. Um, yes, they would. Vogg was and is the song writer, not Vitek. And you know what? Vitek would have been proud of this. Simply because "this" is fucking awesome.

Decapitated have certainly evolved a lot over the years and this is certainly the case with Anticult. They continue to craft their new sound and while it may have a good deal of groove to go along with the death metal, they are still undeniably Decapitated sounding. The groove seeps its way into these tracks and gives them as much in common with Machine Head as they have with Immolation. There are moments where the band breaks down and these are often very interesting. Add those to the death/groove approach and the music here is certainly compelling.

I feel the band are trying to take small steps and really starting to evolve less and less. The music here is similar to the last couple of albums, but brings the headbanging portions with regularity as well. The first track Impulse shows off the groove aspect of the band and sets the scene for the remainder of the tracks. If you’re looking for catchy death metal, then look no further. If you’re looking for the most innovative thing in the world, you might want to look elsewhere, however. Small tweaks are the only thing present on this disc that are noteworthy. However, one must realize they’ve found a nice formula for their new releases. It really resonates strongly how the band have come to grips with this formula and perfected it to a great degree.

Where does the future lie for the outfit? Well, I can see them becoming more progressive in nature, but I hope they don’t completely sell out and at least have some grounding in the death metal genre. The varied approach works here and results in a strong album, even though I believe that Carnival is Forever might have had slightly more impact at the time. Still, Decapitated must be commended for their work.