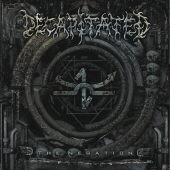 Can someone wake me up? I must be dreaming, I think I've heard a perfect death metal album! Holy shit, it wasn't a dream! It was Decapitated's third masterpiece The Negation. If anyone had any doubts that those four young men belong to the world's first class of death metal, then trust me after listening to this album all your reservations will be put to the rest.

The first thing that struck me the most initially was the variety and diversity of all compositions. Each track differs in style, mood and arrangements; making The Negation one of the most unique albums where each song has its own character and is easily recognizable. On the other hand, don't think that Decapitated slapped 8 unrelated compositions together and made an album out of it.

Compared to their highly acclaimed second effort Nihility, The Negation focuses more on heaviness and groove rather than speed and technical abilities which makes it more accessible to the casual fan and will bring another dimension to their high octane live shows. Tracks like 'Three-Dimensional Defect' or 'Lying and Weak' will drive metal pits crazy with its harmonized riffs and a tight rhythm section. It's actually impossible to pick one track as an example of one style or another since each one of them is so complete and full of different tempos and forms. Decapitated made sure that every death metal fan will be fully satisfied.

Musically the boys are as tight as ever and every single aspect of their music is taken to the next level. Sauron's vocals are deeper and much stronger than his previous efforts; Vogg's guitar and composition skills matured tremendously over the last few years and while overall feeling suggests less technical output, every track is filled with tasteful but still very technical licks and the highest quality solos. Top it off with Vitek's and Martin's rhythm section and you'll end up with the most destructive and angry album you've heard in a while.

And the last, but not least, aspect of this album worth mentioning is the very distinctive style and sound that this band created, making Decapitated not a clone of what's already out there but a driving force by which death metal albums will be judged and compared to in the future. Death metal doesn't get any better.