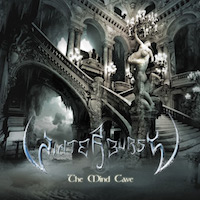 After hearing Winterburst's demo a couple of years back I was so impressed I ordered a CD from the band. While I'm not big on keyboards (meaning...practically hate) in metal music with rare exceptions, this symphonic black project really captured my attention. Naturally, I was quite anticipatory of the band's first full-length, and so it has arrived with my curiosity piqued.

The Mind Cave reads something like a grand conceptual piece, though, in all honesty, I wasn't able to find out if this is the case. The album begins with “A Mirror's Game”, which lays on the keys pretty heavily, but it's not a nearly a nuisance. Rather, the atmosphere created within those 88 little criminals actually seems to work very well for Winterburst and a select few other bands. As much as I hate to throw wanton comparisons around, the band's current effort reminds me quite a bit of Carach Angren from the Netherlands, who is currently making some tremendous noise around the metal world. The same basic formula is there, and that's quite the positive. There's the genuine feeling of a 'full', entrancing vehicle made specifically to transport you from one realm of consciousness to another, completely at the behest of the band. The guitars finally take precedence in the second track, “The Mind's Cave”, showcasing some chugging riffs that take black metal to its logical (albeit thicker-sounding) next plateau. The band has some definitive talent, and the arrangement of these tracks shows some musical introspection and indelible knowledge of the music at hand.

The vocals are your garden-variety shrieking, but as with any attempt at modern black metal (or ancient BM, come to think of it) these vocals are essentially the accepted and anticipated norm. Unlike Carach Angren whose sound is literally overflowing with grandiose musical statements, Winterburst takes the similar high road and keeps it highly grand as well; the keyboards are an important element for the band's brand of blackness, so for a guy like me that sees no viable place for any keyboard to take the place of a guitar this is the perfect and intelligent utilization for the instrument. The imagery created with those black-and-whites, particularly in “The Immortals”, is exactly what this medium calls for, and the French guys have it.

What helps the album achieve such resonance and interest is the fact that there is no true selling over to the commercialism of the stepchild of black metal. That is, so many bands now are vying in vain to re-create the medium and alter, however criminally, the original idea that one can't help but be disillusioned at any given turn. It's bands like Winterburst or Carach Angren that keep us all honest and satiated, providing a sort of blackened opera that can create all of the visuals Burzum or Sacramentum once held true, but on the larger, more rounded scale. The Mind Cave offers the fan a genuine effort void of droning ambiance (that really says nothing and leads nowhere) and attempts to lift the mind and spirit in one fell swoop, which is no easy task today. The occasional dabbling from acoustically-driven passages (“Insanitarium”) to a full-on metal assault (“ The Ancestral Ritual”) gives absolute flavor to the record without bending the principle in the process. I saw some great things for these guys two-years ago, and I'm glad to see that they not only built upon the creative sparks of the Winterburst demo, but took the concept and ran with it in the right direction!

With a production thick with heaviness and aura, The Mind Cave resounds through the recesses of the forlorn soul and weights down the air so as to find the perfect crevices to seep out like a fog and cause havoc from within. Overall the debut is a great step forward with hopes of keeping the line going for the next few records as well.