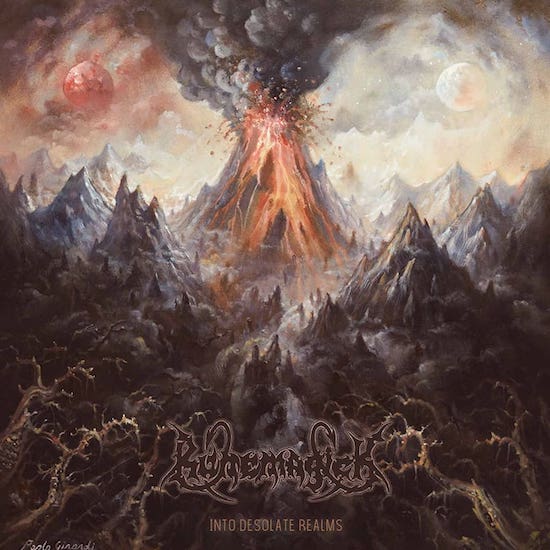 Type: Full-Length
Release Date: October 25th, 2019
Label: High Roller Records
Genre: Death, Doom
1 Remnants Of The Old
2 Into Desolate Realms
3 The Opening Of Dead Gates
4 Sorceress Reburned
5 Decay To Nothing
6 In The Sign Of The Dragon Star
7 Necromancer Of The Red Sun
8 After The Sepulchral Lava
9 Requiem Beyond The Stars (Bonus Track)
10 Wolves Of Nocturnal Light (Bonus Track)
11 Ash And Silence (Bonus Track)

Into Desolate Realms comes approximately one year after having released Evoked from Abysmal Sleep which signaled the break in the 10-year hiatus of Sweden’s legendary, Runemagick. From what I could gather, the band has been through many trials from line-up changes to disagreements with labels, you name it they’ve lived it. However; that has not hindered the will and quality of the music coming from the Swedes. Runemagick’s first official expedition came in the form of a promo released way back in 1991, they’ve come a long way since then, in nearing 20 years of dominating the death/doom gamut. For those who may be fairly new to the band such as myself, there’s no need to adjust to their sound given most of us are familiar with the likes of Bolt Thrower or at least I hope; then just imagine a slower, groovier form of our beloved. Though mostly throbbing at a moderately slow pace Into Desolate Realms has both wheels and wings in which you’ll soon find out.

I remember hearing and being immersed by their 2003 Darkness Death and Doom record which prompted my growing interest in the unit; then I snagged 2018’s Evoked from Abysmal Sleep and hitherto, what I have amassed of Runemagick’s discography has been ever so satisfactory. Hence; for me the big question is how does Into Desolate Realms hold up against Darkness Death and Doom and Evoked from Abysmal Sleep, answer; the current release is a beast within its own kingdom. Runemagick’s trademark sound is present here, however, along comes a prevalent stoner/psychedelic undertone breeding with the marrow of an ancient resonance to initiate this new chapter in Runemagick’s near flawless inventory. Nicklas’ gargoyle of a vocal chord returns ever still hungry as though 2018’s feast was but an appetizer, the riffs and pace-keeping of the drums and bass, skill glib to the identity and characteristics of this celebrated syndicate, now making golden strides and advances towards immortality.

Psychedelic/stoner elements can be pointed out due to its contrasting tone, whispering to the loud and dominant voice of Runemagick’s unchallenged death/doom potency; yet through its prudent assimilation, those mountainous-climaxing moments I admire about their music is never substituted or worse, hindered to facilitate the band’s bending of their staple sound. That slow and steady climb towards majestic heights is there to be heard on ‘Into Desolate Realms’, ‘The Opening of Dead Gates’, ‘Sorceress Reburned’ and ‘Decay to Nothing’ and so-forth. Nicklas’ voice accompanies and steers the listener/s through the heavy passages of guitar chord progressions and monstrous fucking riffs being ever so often placed upon the listener to form a crescendo of melodicism projecting anxiety, dread and despair. It’s so seamlessly done on ‘Wolves of Nocturnal Light’, the way Runemagick can pull the listener into a space of stillness, then slowly begin to advance forward in levitating towards a tonal apex; the movement on Into Desolate Realms is sprawling and effects even the most claustrophobic moments. The drumming is played in a supervising manner, as though conducting the fluctuation and stability of the tempo greatly impacting the guitars, bass and vocals to summon a mood of devastation.

All this is completed with lyrically obscure themes surrounding occultism and perils home to the artistic direction of Runemagick making for a consuming experience. As implied before, Into Desolate Realms is in a world of its own, thus trying to compare it to past material by the band could be a bit tedious, though the traits of vintage Runemagick do make bold, impactful appearances. For a death/doom metal outfit this old, the dusty suit still fits like new; regardless of the hardships threatening to damage the morale of the unit. Hence; after listening to this latest output by Runemagick I’ve began to get the feeling they’re one of those ’can do no wrong’ bands; the type of unit that turns anything they touch to gold even if what’s being done goes against the grain or stitching of a familiar fabric. There is nothing done that foils Into Desolate Realms, expect veteran music from a veteran band that both new and old-headed supporters can appreciate.