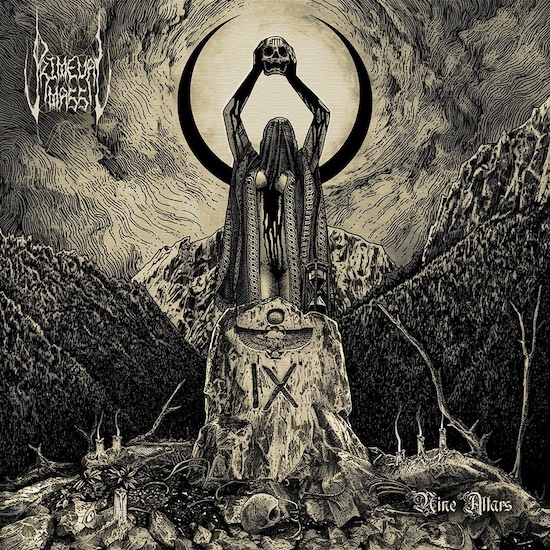 If this is your first time (such as me) hearing Primeval Mass then it's safe to say it will be an enjoyable one. There's something here for the 1st wave black metal fan, the traditional heavy metal fan and a lot for the speed metal maniac. Though the project fronted by Orth has undergone changes since the 2003 demo debut, after hearing Nine Altars you'll get the feeling it was done for the better. Black metal can get boring rather quickly especially if you're listening to Darkthrone carbon-copies. But when the backbone of the genre is given alignment adjustment with the addition of speed metal and traditional heavy metal, it not only becomes exciting to the ear and fresh once again but justifies the essence of the music. Can't tell you how many times I've had to revisit the classics (Venom, Bathory etc.) as an act of therapy; but when a project such as Primeval Mass can borrow some of the elderly spells and apply them, they save me the time of having to go soul searching. For, Nine Altars the black metal factor lies within the vocals and philosophy behind the lyrics, while the speed and trad metal tackle sound; now that’s very old school/traditional.

Most songs are lightning fast and packed with great solos, Orth’s riffs are outrageously good considering the speed at which most are played; and for a 54-minute record, consider what you’ll get on Nine Altars a treat. 'Circle of Skulls' is good but compared to tracks like ‘The Irkallian Born’, ‘Night Rapture’ and the scorcher of an instrumental ‘Amidst Twin Horizons’, it just does not manage to even rise from its kneeling position. Those songs are fucking lethal riff-wise and the drumming is more than the average speed metal wallop. Ruthless fills on the toms and snare all done quick and tidy. Instrumental track ‘Amidst Twin Horizons’ sounds like a lesson conveyed with disdain for the lackluster representations of the genre. Repetition is not an issue here as you’ll rarely find the content on Nine Altars struggling to stay refreshed, again it all comes back to the guitaring, there’s always a new and more exhilarating riff to follow, thus transmitting massive levels of sonic dopamine to the listener. Having managed to open so convincingly it would prove a challenge down the order to sustain the impetus.

With ‘Amidst Twin Horizons’ being the peak of side A on the record competition among songs stiffens on the B side. ‘Burning Sorcery', ‘Orphne' and ‘Firecrowned’ go to battle with each other for the main spot on side B and eventually the complete record; pelting out fiery lacerations of licks, Orth is a real showman, same can be said about George C. that when joined as a team, construct music that embarrasses the piles of alleged ‘efforts’ by other bands. Amidst the competition without expectation the true pinnacle of the album is realized on the final track being the longest by a significant margin, ‘The Hourglass Still’. As if Bathory never went away and "Hammerheart" is the album of the year, this epic ode to black metal genius freezes the glistening era with a serenade that in contrast to the speed takes the road long, cold and slow to a knighted height. There’s no trading punches with this song, its far out the league of all other entries on Nine Altars, a heavyweight to a featherweight, gold to copper, ‘The Hourglass Still’ demolishes without being scraped a single time; thus bringing Nine Altars to the conclusion it is worthy of and giving Primeval Mass a stronger imprint within the Greek black/speed metal terrain.