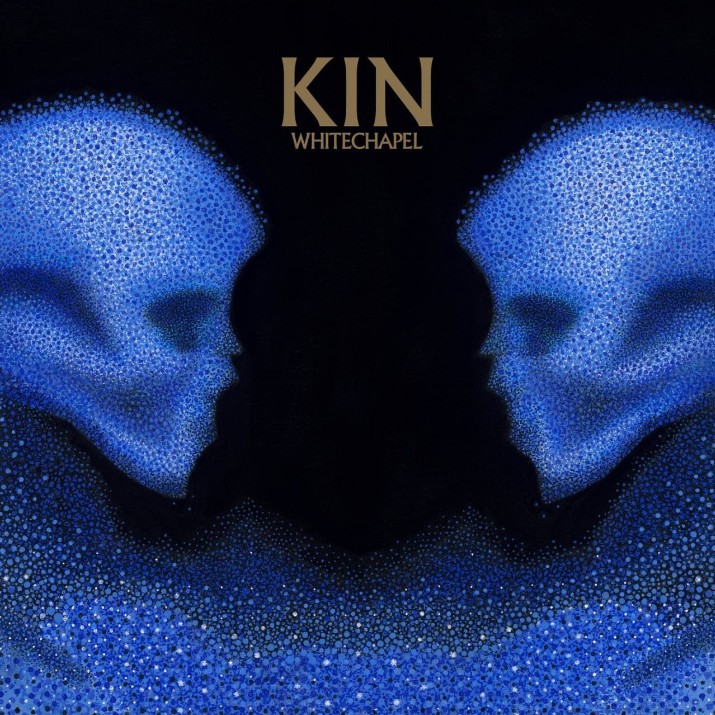 Buy on: Bandcamp
Type: Full-Length
Release Date: October 29th, 2021
Label: Metal Blade Records
Genre: Deathcore
1 I Will Find You
2 Lost Boy
3 A Bloodsoaked Symphony
4 Anticure
5 The Ones That Made Us
6 History Is Silent
7 To The Wolves
8 Orphan
9 Without You
10 Without Us
11 Kin
MetalBite on YouTube

The day I picked up this album and slipped it into my car's CD player, I was unprepared for what would hit my ears. I freely admit my shock at this paradigm shift of tone and style is due to the lack of attention I've paid to this band. Over the nearly decade and a half this band has been actively putting out albums, I've only sat myself down and absorbed their debut. I've never been a fan of the heavy testosterone-laden, tough guy, breakdown-laden, chug-chug-chugging, chest-thumping, arm-in-arm, bro-to-bro core-fest that is most of Whitechapel's material. I was thoroughly appreciative of the debut's take on the knife-wielding serial killer, Jack the Ripper, and his fetishistic prostitute murders, though it had more than its fair share of problems which I elucidated in my review, so feel free to eyeball that if you ever feel inclined.

I'd heard through the grapevine from metal publications and review sites that the album before this, The Valley, was something of a gravitational shift in direction. The band had gone towards a more intimate, personal sway that was penned by Phil Bozeman, the band's founder and lead vocalist, focusing much more directly on his troubled childhood, personal struggles and tragedies throughout his life. The lyrics reflected this as did the musical style, shifting away from the previous style of their older albums and into territory that spoke more to melodicism within a more subdued, almost airier form of deathcore. In fairness, this description I'm giving may be missing the mark altogether because I never got the chance to listen to The Valley. I'd heard great things about it and I don't doubt the tonal shift which led to the increased attention was probably what led me to getting their newest album right here.

"A more subdued form of deathcore." Now how does that make sense? Deathcore's aural palate is all about very pronounced, down-tuned guitars, crushing breakdowns, explosive bass that makes the speakers rattle and, generally, simplistic songwriting that's more open-ended and more niche than pure death metal. One is specifically targeted for metalheads while the other includes the scene and radio crowd. It goes against the previous charge of this band toning it down a bit. As I said before, this band was a band I ignored beyond their first album. My attention was focused on other deathcore bands like Carnifex and Job For A Cowboy. Speaking of all of these bands all have one major thing in common: the paradigm shift. Carnifex changed lanes a couple times throughout their career, swapping between blackened deathcore and death metal-styled deathcore. Job For A Cowboy went more extreme and violently mutated into a full-on technical and, in the case of their latest album, progressive death metal beast. Whitechapel has done the same and, by no measure, is it a bad thing. If I can be honest, it's a wonderful change that I'm willing to embrace without question.

Gone are the deep, rumbling guitars as they're replaced with much gentler sounding guitars. Somber acoustic passages that exude a dismal, sad, forlorn atmosphere are found in just about every song. These parts are beautiful and do a wonderful job contrasting the much heavier, distorted parts that pair them in these songs. Songs like the opening 'I Will Find You' and 'Anticure' later on are great examples of creating that longing feeling the band gives to the listener with this canyon-wide contrast. There's a ton of clean singing on this album, way more than I expected (I'll be honest, I didn't expect any since this is a deathcore album, after all) and, while I was turned off by it at first listen given the abundance of it on almost every song, they began to grow on me after the second full listen and I was sold on them by the third listen. Bozeman proves himself to be very talented with his clean singing voice. In fact, I'm not ashamed to admit that 'Orphan' drove me to tears when I heard it the first time. It fell entirely on Bozeman's very moving vocals and personal lyrics that seemed to speak to me on an emotional level that doesn't happen much beyond a few bands and artists like Devin Townsend and Volbeat, for example, whose lyrics are very introspective and personal. Any album that can makes me cry upon first listen has done something incredibly, incredibly right.

Continuing with the songwriting, I want to dissect it a little more. I've already mentioned the body, the rhythm guitars. Let's talk about the muscles and the tendons and the rest of the inner workings that structure it. Like I said before, the majority of these songs have acoustic sections or, if not acoustic parts that open or close each song out, guitars that don't ring or rumble quite as loud as you'd think if you're more familiar with their other stuff. Fret not, though, for it's not all mellow, easy listening because the songwriting does allow for a more no-holds-barred approach. 'A Bloodsoaked Symphony', for example, probably sticks closest to the typical deathcore formula. It's got much more of the songwriting that typifies that style in its drumming and chugging. Same applies to 'Lost Boy', which has some of the most intense drumming on the record. 'To The Wolves', in particular, dives all but headfirst into melodic death metal territory. It slithers with shades of DevilDriver to these ears with a solo that drives home the melodicism and technicality that reminds me even more of DD. Speaking of the solos, they're pretty spaced out and don't take up much of the running time as every other song contains one solo that, once more, sounds about as far from TSD and Exile-era Whitechapel as earthly possible. I'm not particularly chafed about this. In truth, I've never been the biggest stickler with guitar solos, though I do appreciate a good guitar solo when I hear it. The drums and the bass also lean more towards a much more subdued timbre, getting fully reclusive sometimes. The instrumental interlude, 'Without You', is the most prime example because they're completely nonexistent there. Yet another example, also incredibly prominent, of the vicious shift in tone that I pinpointed towards the beginning, is the title track that closes the album. This is an almost entirely acoustic piece with one half running with that, while the other half runs to the finish line with full-blown melodic death metal leanings.

I could go and praise this album all day long but, lo, it's not a perfect record. There are a few gripes I have. For one, while I do think the pacing of the album is wonderful, the end, once 'Orphan' hits, is where the album runs out of steam with its heaviness and goes entirely soft on the listener with little in the way of crushing moments. I understand the concept and narrative of this album would, by its nature, lead to different songwriting structures needing to be yielded to accommodate the emotional peaks and valleys this album takes the listener on but, the last four tracks are really kind of hit a stride of being quite radio friendly. Also, I don't particularly care for Bozeman's roughs here. He seems to have lately fallen into the CJ McMahon pothole of only having one mid-ranged growl to work with and it gets very tiring to hear just that octave being belched out. Occasionally amidst the middle-of-the-road growling rabble, some higher pitched screams are peppered in to serve as the typical double-tracked vocal affair often heard in just about every genre of metal under the boiling sun and it's just as tiresome here as it is there.

When all is said and done, the personal purging of Bozeman's demons continues with this album and it's a journey worth taking. Kin has a few bumps along the way, a few brown patches that might spoil the experience a touch but, nothing that's ultimately a deal breaker rears its ugly head. This album, all in all, is fantastic and I'm pleasantly surprised with it. Here's hoping this new direction continues to inspire more amazing musical manifestations like this.