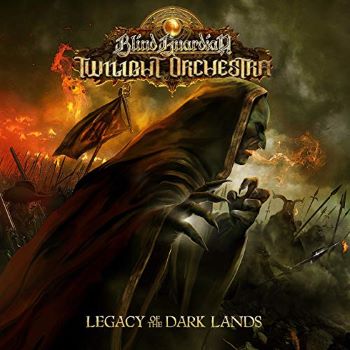 Some years ago, I saw Fabio Lione (Angra, Rhapsody Of Fire, Lione/Turilli Rhapsody and a lot more projects that I don’t care to count) saying that in Italy erudite music – I say erudite because the term “classical” is much more specific than people realize – is a very common thing in households and is usually that way children and young people start to study music. I imagine it must be rather similar in Germany.

Throughout the long history of heavy metal we saw many examples of erudite music being part of the genre, in greater or lesser degrees, and many of the times the bands which do that are from Germany. It is in their minds, it is part of them, the north star which guides them on the adventures through the deep oceans of the genre. So, it is absolutely no surprise that the boldest project mixing metal and erudite music comes from there, and also by no one else than the mighty Blind Guardian.

Twenty years in the making and this record is worth each and every day of the waiting. No guitars? No bass? No drums? Who the hell cares? All the essence of the songwriting that makes Blind Guardian so special and so unique are there, and in the end of the day, that’s what really matters. The epic-ness, the bombastic chorus, the breathtaking and heartwarming passages, the inimitable voice of Hansi Kürsch who leads you effortlessly to a world of magic, fantasy, adventures and imminent danger and darkness. It’s pretty much a proper opera, standing on the shoulders of Teutonic giants. How not to love it?

This is an album in which you can feel all the painstaking hours of hard work, by Hansi and André, but also of the people who made it possible to translate their ideas to the musical sheet of a full blown orchestra in the right way. The very same orchestra, the choir, the back singers, Markus Heitz and the world he helped to set up in his book Die Dunkle Land. Even more than a piece of great music, it is a piece of love, a chunk of the soul of those creative minds who refuse to settle for what is comfortable and guaranteed. The ones who acknowledge that the only way is forward.

But it is a “near perfect” output. The downside to me is that the interludes – even though playing an import role on the storytelling – eventually become a bit too much to swallow, making the audition flirting with tiredness and sluggishness. Maybe it would work better with only half of them disposed differently and with some music behind for more impact and more immersion (but I gotta admit that the narrators from Nightfall in Middle-Earth made me shed a tear of two). The other thing that sting me is the story itself. All that religious and biblical and Book of the Revelation motifs are too much beaten and worn down to my taste and, honestly, it goes dangerously borderline with cheesiness and cliché. I think Hansi could come with something fresher for this project.

But you know what? I don’t really care about the story; the music is just to awesome and fantastic that I am willing to let it pass and sing along from the top of my lungs. Easily my favorite album of 2019 and a surely a career peak to André and Hansi. May the Twilight Orchestra gather again. The Gods know I will ride this train.