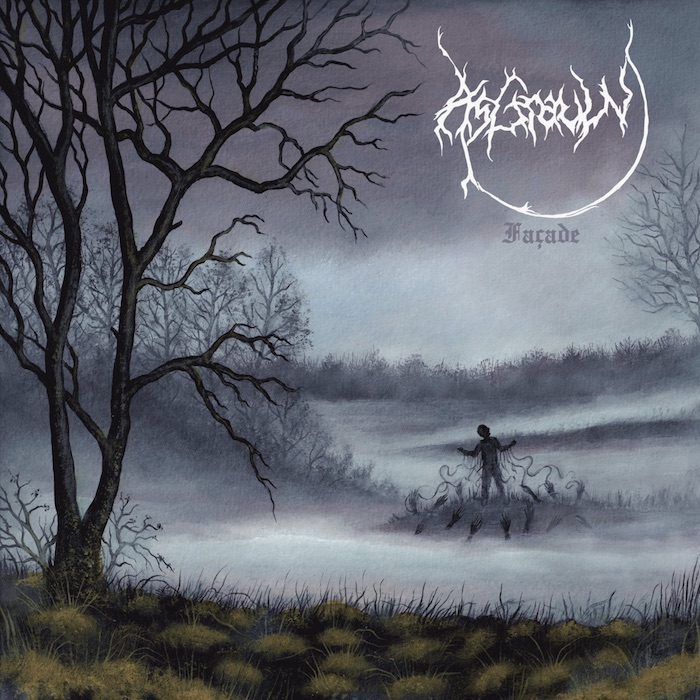 Ghostly mist rises over the faded tulip fields, deep dark forests and moors of the Netherlands stretch out its cold foggy fingers of death to reach people who didn't find shelter before it. Inside the fog you can hear some words being whispered  in a strange harsh language and some wooden clogs clack like a clock counting down to meet your maker. You cannot escape this scenario; no, you are somehow attracted to the fog and follow the beckoning hand that reaches out of the dust to invite you to a deadly and captivating trip. Sounds scary, doesn't it? Well, if you take a look at the cover of the new Asgrauw album you somehow can come to such an idea.

On Façade the already fifth full-length album of the Dutch the listener can find a lot of mystic and atmospheric tunes that may be the offspring of early Dimmu Borgir or Satyricon albums. But before one can be lulled in too much by the keyboard sounds, the three guys change style and kick-off with some pretty harsh and sometimes slight punky black metal that is very fast and full of hatred and anger. This description may lead to the fallacy that the music is slight chaotic – which definitely is not. The range between atmospheric and hateful music is pretty wide but Batr (drums), Kaos (voc; bass) and Vall (git, voc) have composed eight really amazing and entertaining tracks with many twists and turns and amazing ideas how to create very unique black metal.

Of course the Dutch language makes the album even more interesting because (as I already mentioned in some other reviews) this language is pretty harsh and cold and when the lyrics are spit out in this black metal style it even sounds doubly unkind. A very good example for this harsh sound is 'Tussen Willen En Kunnen' (which means “Between Want And Can”). This is a very hard song with a mix of spoken and screamed out vocals. This track is so full of hatred, I doubt that Darkthrone will ever sound as evil as this again. Apart from that the song is a very good example of what the band stands for: pure worship of the mid 90s when the second wave of black metal was going around and brought bands like the aforementioned ones and some other Scandinavian gems to darkness. The almost always present keyboards create a very nostalgic mood in me (similar to one of drummer Batrs other bands, namely Schavot) and this is all I need to be happy with for a great and rousing black metal album.

About the lyrics, unfortunately the band doesn't print it in the booklet. But as I was told the lyrics deal with death and how to deal with it in different cultures. This sounds quite interesting and I wish to get them somehow though. Well, nevertheless it is worth checking the music out without going into detail with the lyrics. It is difficult to mention some really outstanding tracks on Façade because the whole product is a very convincing piece of music. Maybe 'Hernemen' (“Reconquer”) is another track that might be a little bit more top-notch because the start is quite galloping and catchy and the middle-part is very symphonic and fast-pacing both, it creates a very cold, frosty and inaccessible atmosphere. This song represents what and why traditional 90s black metal made me love it.

The production is no lo-fi for sure but still has these raw and unpolished tunes that black metal needs. I guess you know what I mean – there are so many albums coming out that were produced as if the drummer fell downstairs and while he was falling he also grabbed the guitar player and both fell on the already downstairs yelling vocalist. This isn't a case here for sure. You can hear everything very clearly but it also isn't as if the focus was on total perfection and clear sound – that's a great job here!

So if you don't need your black metal in any dissonant, post-, pre- or in between wrap or you only can listen to it when the production is done so soft that even your granny can listen to it and your favorite albums are still originated in the 90s, you have to check Façade. It won't disappoint you!