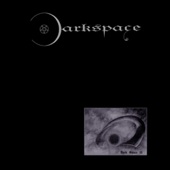 Are you conscious of the space around you?
Would you like to explore it more?
Upon the voyage there take notice of the newest Darkspace disc.
Pump up the volume!

Not many bands come out of Switzerland but when they do chances are there's something spectacular on the orbit to encounter. Darkspace, an entity veiled in relative secrecy started in 1999. They released their first two albums in limited quantities. Now after listening to their latest, third opus, I'm not surprised at all that Avantgarde re-released all those discs along with the most current.

So, what's the whole buzz about?
Well, it's not some average black metal elegy piece here but a release with very solid wall of sound a potential receiver must go thru. What I like especially about Darkspace is their so-called 'minimal approach' to the craft, where less is really, really more. Darkness and music.

Cosmic speeds rule here. Keyboards are probably the most important tool in creating that enormous sound-sphere. Occasionally when everything slows down one is being rubbed off by guitars' riffing, but shortly after ambient soundscapes envelop further. Repeat-ness rules here, but it is not monotonous. Drums, quite mechanistic rumblings indeed, are more alien than human, yet that constant 'martian pattern' after a while becomes quite transcendental even hypnotic.

In the final mix the drums on Dark Space III can be heard behind more dominant guitars and keyboards. Occasional vocals surface here and there. These screams are hard to understand, however, they blend well with the whole proceeding of harshness and [un]controlled chaos.
Out of these swirling cacophonic crescendos at one time some voice awakens and we hear:

"Suppose what your faith has said is essentially correct. Suppose there is a universal mind controlling everything, a god willing the behavior of every subatomic particle. Well, every particle has an anti-particle, its mirror image, its negative side. Maybe this universal mind resides in the mirror image instead of in our universe as we wanted to believe. Maybe he's anti-god, bringing darkness instead of light." *

For those who worship Esoteric, early Emperor, Misticium, more ambient oriented entities like Lustmord this release is a must!
This is XXI century music of the spheres; this is my 2008 space odyssey.