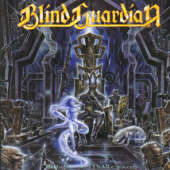 Armor clad armies swarm over the plains in a bloody battle and the resonance of Blind Guardian dominates the land. The thousands of eager metalheads gloriously emerge victorious as Blind Guardian bestows upon them one of the finest symphonic power metal albums on the planet.

Yes it’s that good. If there’s ever a power metal album that’s got it all, powerful heavy metal, symphonic elements, medieval chants and sounds, fantasy storylines... this sure as hell is it! There is a definite lack of speed, however, that is usually a power metal trademark, but this is made up for with complicated, progressive a symphonic melody and flashy lead guitars. Instead of intimidating you with speed and shredding, "Nightfall"... enchants you with melody and atmosphere. Each song passionately conveys a feeling of anything from great sorrow and irony to clear and immediate danger.
Now of course not all 22 tracks are actual, complete songs, half of them are short interludes often containing short speeches and sounds essential for holding the storyline together. The real songs are long and the lyrics elaborate. Hansi’s multi-vocal thing definitely takes time to get used to. At first I thought it was the stupidest thing I’ve ever heard, the weird vocals that sound like a lame, screwed up choir. I’ve gotten used to them but, truth to tell, the singing still annoys me to a great degree. I know Hansi’s gotta great voice and he could pull it off without another 15 of his voices backing him up. They get most unbearable in "Mirror Mirror".

The one hour of music on this album is one hour spent in Middle Earth, living through J.R.R. Tolkien’s story of "The Silmarillion", such is the atmosphere created here. Many medieval instruments are used which really add to the feeling. The best tracks are "Into the Storm", "The Curse of Fëanor", and "Time Stands Still..."

Bottom Line: Complex, excellent music that creates a thoroughly medieval atmosphere. The vocals are something to get used to however, and I just can’t seem to be able to...