Since their 2005 formation, Banisher has delivered a captivating style of brutal death metal loaded with technical precision and an experimental/sci-fi flair. With "Degrees Of Isolation" they deliver eight new songs totaling forty minutes of pulverization and it is the most advanced, diverse and mature (both musically and technically) album they have ever recorded. The lyrics are based on true events, which makes the music on "Degrees Of Isolation" all the more dark and depressive. Album comes out on February 29th, 2020 on Selfmadegod Records but before that happens we had a nice chat with Hubert Więcek who introduced us to the new album and ideas behind it. 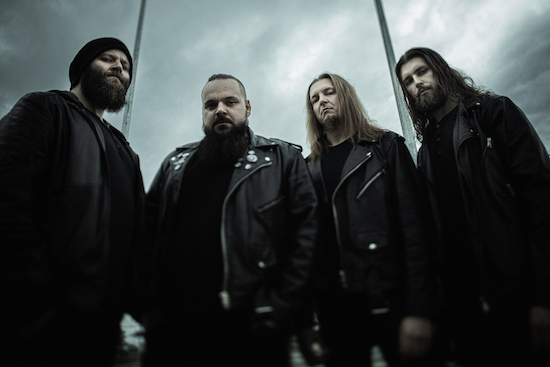 Hello Hubert, thanks for the moment dedicated to MetalBite. So, in the end you got this album off of your chest. Are you satisfied or even happy with the final result? I think you should be.

I am very happy with the final result. Degrees of Isolation is the best, the most mature and complete in every respect album that we have recorded with Banisher so far.

Fortunately, I didn't have to experience what you had to go through three years ago. It took a long time to digest anger, sadness, seclusion into sounds and words, because if I read correctly the subject of the lyrics are those events?

It took me a few months to get back to normal. It was not easy. Fortunately, I had incredible support among my family, friends and acquaintances, thanks to which I managed to get back on my feet relatively quickly. Playing shows also helped. When I saw all the smiling faces in front of the stage, people who were happy about our return, I knew that we got over the hump. The lyrics on Degrees of Isolation talk about the feelings and emotions experienced while being detained, staying in custody and after being released. Everything based on real experiences.

Can you tell what happened in your head when while having fun backstage after the concert you were suddenly arrested in a foreign country, away from your loved ones and with such serious accusations? Suddenly, from the viewer of more than one American film, you became part of this fucked up "justice" machine.

At first, it seemed to me that it was some absurd joke and misunderstanding. The scene was really like in a movie, 10 policemen with shotguns, in Kevlar vests, grab you as you stand while you're in shorts and flip flops. It's good that I had my phone and wallet with me. It got worse from then on. Weeks of waiting, transport through 4 states, where I visited 10 different arrests, and then just waiting for what will happen next. Fortunately, it ended 'quite' well, but what I experienced is simply beyond words.

OK, let's get back to Banisher. You started the band with drummer Michał Such, and you recorded each disc in a different line up. Tell me, were you the spiritus movens of this band from the very beginning?

Basically yes. All the numbers composed in Banisher have always been my authorship. On the last album I also had a significant contribution to the lyrical layer.

I understand that all new musicians are buddies you've met on stage over the years. How did you organize this 'draft' to Banisher?

Being active on stage and playing concerts for over 15 years, you naturally meet the majority of musicians who also play in other bands. In addition, I monitor various musicians on YouTube or other social media portals and go to all concerts in the area whenever I am free from playing or I am somewhere around, so I have quite good insights. So, when the time comes when I need to find someone to join a band, I know more or less (in the back of my head) who would be suitable for a given position and just ask if he would be interested in playing. I had the pleasure of playing with many fantastic musicians in all the bands in which I participate, which makes me very happy, because in addition to playing with good musicians, you up your skills as an instrumentalist yourself, and on top of that you play with people you know and like.

Since the founding of Banisher, it has always been a guitar driven technical death metal, but vocals are a different story. At the beginning, growls and roars from the borderline of grind, and now more extensive and varied, resembling the middle of Decap's discography. Was this a deliberate or rather natural change?

It seems rather natural to me. Each of the Banisher vocalists had a different type of voice, tone and style, and these differences were audible. On the other hand, both the band and the musicians who have played or still play in Banisher develop over time musically and gain experience, hence the natural order of things is that the vocals with each subsequent album are simply getting better.

How did it happen that, although the cover was taken up by a new graphic designer, the colors of both last albums are kept in a similar atmosphere?

It's hard to say. Łukasz got guidelines for the cover, he got insight into the lyrics and music and just got a free hand in creating illustrations for Degrees of Isolation. It turned out phenomenal. It seems to me that it's nice that both covers are similar in climate, although this was not the intended effect. On the other hand, the theme of the songs on both albums is rather dark, depressing and schizophrenic, which perfectly reflects the picture on both Oniric and Degrees.

Playing with Decapitated is certainly a multidimensional development, but on the other hand, isn't this a certain limitation for Banisher's live activities? Are there any chances to see you live this year?

Unfortunately, each of us, not just me, is quite busy in other bands or projects. Gathering the four of us together in one place borders on a miracle. We live in four different cities in two different countries, which also doesn't help. Still, this year we want to finally get together for more than a few individual pieces and play more. The more so that this year we will hit 15-year anniversary. Therefore, we are slowly starting to plan something for the second / third quarter of 2020.

In addition to Banisher and Decapitated, you support the concert line-up of Acid Drinkers, and you also participate in Redemptor. At one time you were also a teacher at Cracow's Guitarmanic. Are these all your musical ventures?

Only Banisher is my project from beginning to end. Guitarmanic is a guitar school founded by Daniel Kesler, the same applies to Redemptor. I started to support Acid Drinkers at concerts at the end of 2019. Of course, Decap is Vogg's band. From other musical adventures I had the opportunity to play as a concert musician in several bands, I also had several successful and less successful projects along the way. In addition, I give private guitar and bass lessons as well as I am a session / studio musician.

What are the chances for you to meet Daniel and Xaay in the not too distant future to open the next chapter of Redemptor?

Yes! Redemptor will return this year with a new EP. We've met with the guys a few weeks ago and started to work out a plan together. In addition to the new release, we also plan to hit the road in the second half of 2020.

You released your first albums through American labels (Torn Flesh Records and Unquiet Records) to finally get under the wings of Polish publishers (Deformeathing Production and Selfmadegod Records). What was the reason for such behavior, searching, or need of a moment?

The first Banisher album was released at our own expense, Torn Flesh Records offered us the digital distribution of the album. Unquiet Records is the label of our previous vocalist, Tytus. With each disc we were looking for a publisher who would be able to offer us the best terms of cooperation. Each previous label has done its job very well. SelfmadeGod Records is the next step forward for the band.

I hope I haven't bothered you with these questions. Thanks again for your time and I hope to see you at Banisher's gig.

Thank you for the interview and I think you can safely count on our live performances in the near future.