Like speed metal?, from Sweden?, that's classic?, ugly?, violent?, with Motorhead and punk vibes? then put "Under Siege" by Tøronto in your car next time you head out on the highway. Heard revving their engines from miles away, the Swedish quartet continue to blaze the trail with their latest high-octane, high-speed, riff-o-rama on "Under Siege". If you want it 'Fast and Filthy' too, then its all here for you to dive into. 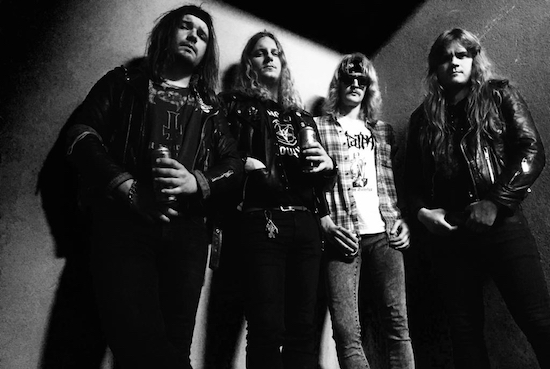 How are things as of late in Sweden given the current state of affairs?

Not really sure to be honest, a bit dead. Sucks when you have nothing to look forward to for the whole summer. Hopefully this won't interfere with the Macken festival in September.

How has it affected Tøronto as a band?

We're pretty mildly afflicted. Two canceled gigs and some kind of plans for a mini-tour with Karloff postponed. Sucks, but there are bands in way more trouble I guess.

How did the band come together?

When Morbus Chron split up, Dag and I started talking about playing something a bit more simple and punky with the guys from Temisto. Then, after about two years of using our rehearsal space as a festival camp, we finally started working on some tunes. Sebbe left, Staffan joined, and here we are.

Please explain the meaning behind the name Tøronto.

First off, sounds cool. Too cool word to be wasted on a city. But also, the original idea was to sound like Slaughter or Sacrifice, who I think are from Toronto. That didn't go too well though, ended up way punkier.

I'm not too familiar with speed metal from Sweden, except for Reaper and Enforcer. Where metal is concerned, when I hear the word Sweden I usually think of death metal and 2nd wave black metal thus, what's the speed metal scene like in Sweden as far as promotion and appreciation goes?

I don't like the term "punk metal", but i think that might be a better sales pitch than speed metal in our case, since we lack a few key features of that genre. Speedpunk maybe. Or whatever, doesn't matter. Don't know much about the Swedish speed metal scene. I think you're supposed to play 70s rock these days.

Tell us a bit about the music on the upcoming EP Under Siege, how long had it been in the making?

All songs where written for the EP and we wrote them pretty quick, but we had to wait a few months for the studio to be vacant. Eight filthy tracks, seven fast ones and one ballad. Leo and Staffan comes up with evil stuff while I usually go for the "mother-chords" so there's a good mix of Riffs on the EP.

And did the Lemmy (R.I.P) Motorhead sound come about naturally or were you gunning for that from the beginning?

Naturally, I never have anything in mind when i write songs. But I guess Motörhead-vibes will always slip in, one way or another.

What are some of your favorite tracks off Under Siege?

I like Mud City Maze. It reminds me of ZEKE, one of my favorite bands.

Are the songs connected to any personal events?

Some are, and some are just about cool stuff. The song Ride the rails is a hymn to the gentlemen who patrol Stockholms metro system. Dickheads.

Did the music pose any challenges to record?

I was in a stupid fistfight with my friend the week before we started recording and fucked up my finger, so Staffan had to play all guitars. Other than that, things went pretty smooth.

I admire the classic production of Under Siege, who mixed mastered and recorded it?

It was recorded, mixed and mastered by Kenko at studio Communichaos. Great guy and nice studio. Turned out great!

What does the artwork represent and who created it?

We had a couple of designs in mind but we went for this, cuz it looks neat. Staffan made it based on my design. If not obvious, it's based on that old picture of American soldiers raising a flag. Guess the inverted cross symbolizes "raising hell" or something like that.

How has reception been since Tøronto's formation?

Good so far, people seem to dig it.

How did you get on Dying Victims Productions?

Guess they heard our first demo, liked it and contacted us. Great label, easy to work with.

It might be too early to ask, but when can we expect a full length from Tøronto?

We hope to record it this year, so hopefully 2021.

Thanks for doing this interview, stay safe. Any closing words for the speedaholics worldwide?

Thank you! Buy our record or I'll cough you in the face!