The militant makeup that is Front hailing from Finland have returned with their latest strategic strike in the form of "Antichrist Militia". A true embodiment of the sonic warscape that is black/death/thrash metal, most supporters of the format will appreciate upon first listen. Squadmates Von Bastard (guitars & backing vocals) and Kaosbringer (vocals) took some time way from the machine-gun turrets to share their thoughts on "Antichrist Militia" and some problematic things surrounding the medium known as black/death metal. 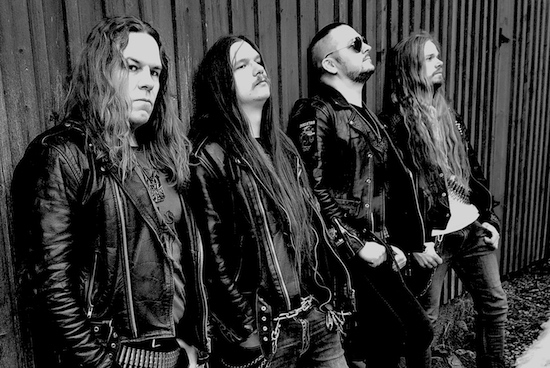 How did the members meet and what events led to the formation of FRONT?

Von Bastard: Back in 2013 or 2014 I begun writing new songs for Sacrilegious Impalement and soon realized that this is a start of something new and these songs should be done under different moniker. At the same period Kaosbringer was filling in for Wrathprayer as the live vocalist for SI and I asked him if he'd want to join this new band I am putting together. His mindset towards the vision for FRONT was close to mine. He's also a bank of knowledge for war history and I think his vocal sound and range fits perfectly to FRONT so it was easy. It was only natural to ask Revenant for the drums, we'd been working years together in SI and the collaboration is unbeatable. Just take listen to our guitar & drum interaction. He almost every time get's it right away what I am after with the drum arrangements. Later on when we started to play live, we recruited Meister F for the bass. Now the band fires with all cylinders.

How has the series of world events affected Finland and primarily FRONT?

Kaosbringer: Well we couldn't rehearse for couple months due to lockdown. That's about it.

How has the band been spending time given the current call for social separation?

Von Bastard: Well, I am a pretty isolate loving person anyway so this virus isn't that much affecting my everyday life. It's been only better as I can go to the center of the city, or shops without many idiots jumping around. When the band is not active, I've been writing even more music.

Kaosbringer: This social distancing has suited me well. Shops are less crowded and easier attend to. Not that much of bar person anymore either.

Please explain the ideologies or main philosophy propelling the music on "Antichrist Militia".

Von Bastard: For the musical parts it's made for self-accelerating, to wake up the demons inside you, to whip your ass. To charge you up before the battle.

Kaosbringer: Cleansing yourself. Annihilating weakness. Weed out the old, sick and weak. Start fresh and build yourself up stronger! "Conquer the unconquerable"

What is the main message you wish to communicate with those who support or are new to the band, with the new EP?

Von Bastard: There's no message for you. You like it or don't, we do this primarily as our own channel to release the hatred within our souls. But also for pleasure. We respect highly the like minded people who have found FRONT worthy. Cheers to all! Stay strong, legion FRONT!

Kaosbringer: As Von Bastard said, we do this for ourselves mainly. I would say that there is also a call for one to unleash the beast inside, though. Don't sleep in the fire!

It's been 4 years since the release of "Iron Overkill"; hence, the band has grown considerably. In what way/s does "Antichrist Militia" differ from "Iron Overkill" thematically and musically?

Von Bastard: Musically it's a perfect continuation to "Iron Overkill", they go very well hand in hand. Only this is again a clear step up. "Antichrist Militia" was recorded in 2018, so there was only two years between the recordings. 'Mouths of War' was actually the first track written for FRONT back in 2014, could be even 2013.

Kaosbringer: Lyrically it is a very much continuation to IO as well.

What does the artwork on the EP represent or try to express from the band's perspective?

Von Bastard: It's a promise of what to expect from the record. It's the landscape of the first song.

Who created that violent cover art?

Von Bastard: I came up with the idea when I was creating the first track of the record. I made a rough draft art to visualize the idea better. Then I send it to J.Hitam who finished the art perfectly with his own style.

What is the recording lineup for "Antichrist Militia"?

With the members being involved in so many other bands, was it difficult organizing the recording of "Antichrist Militia"?

Von Bastard: No. I hope it will continue that way. Lot's of the magic captured on the record can only be obtained by putting serious devotion towards the songs and recordings.

What was the mood like heading into and during the recording process of the EP?

Von Bastard: The collective mood was very energetic, focused like a laser beam. You could almost bite the testosterone oozing in the air at our recording studio. We had many setbacks during the whole process, but nothing couldn't prevent this beast to be unleashed.

Would you say the band was successful in channeling those energies on "Antichrist Militia"?

What song/s do you like most off the EP and why?

Von Bastard: I like everyone of them. Otherwise they'd not be on the record. There are various different things on every song of them and I think it is only a good thing. You can tell immediately which is which song without guessing, or checking the booklet every second.

Kaosbringer: To me 'Mouths of War' has a special place. I really love the whole album but the idea to make a song like this had been a "dream" for me many years (the marriage of heaviness and the use of those samples). That song is HEAVY and full of doom it also paints perfectly a picture of the madness that was World War II.

Is the EP a warm-up for a new full-length anytime soon?

Von Bastard: Full-length is in works. We might release another EP before it..

It seems that with the progression of time metal as a whole is becoming a safe-space, steadily removing its uncensored frame. What are your thoughts on this?

Von Bastard: Fuck safe-spaces, fuck censorship! Grown up people should have the right to choose what is good for them and what is not. We have a recent experience of this our own. We had an online stream of a song from our new record and the very owner of the zine took it down very quickly. We, and the journal who made the streaming, never got any further explanation but that we are a "sketchy" looking band. They couldn't pin-point anything what was so dangerous in our band. With this they took parenting of every and each one of you in their hands, they chose on behalf of you that it's better for you to not listen to us. They tell you that we are bad for you. This is the world of "extremely extreme" metal zine today. He can put his "sketchy" parenting in his pipe and smoke it.

What are your thoughts on mixing politics in black/death metal?

Von Bastard: Not for everyone. But especially in black metal. Core and foundation of black metal is about Satan & satanism, otherwise it just simply isn't black metal, period. Today there are parasite people in "black metal" bands just for the music, gigs and all the secondary things, not because of ideology. Must be because these people think with delusion that it is their "politically correct" right for each and everyone to be in black metal band, hah! If these people should have any backbone, they should with honest call their music pseudo black metal, or something, but not black metal.

What are some of the things you hate the most in extreme metal?

Von Bastard: I don't know. Labeling perhaps. Some people categorize for example Stratovarius as extreme metal. I don't want to be in a same category with them. But this is more a fault of the idiotic people who do these categorizings, not bands nor extreme metals fault.

Kaosbringer: "Extreme". People generally don't have a fukken clue what that is nowadays!!!

Thank you for allowing MetalBite the time to conduct this interrogation. We hope all goes well for Antichrist Militia. Any words for the warmongers worldwide?

Von Bastard: Thank you! Just take a listen and give an honest chance for this record, that's all we ask. Don't monger for war, be the war!

Kaosbringer: Support your local death dealer and get Antichrist Militia!