The French duo Vipère, consisting of Saros and Sans-Visage, recently released their first EP called "Sombre Marche" (review on here). According to the French black metal scene, the band is very mysterious. Musically quite interesting and multifaceted, this of course made me quite curious and so I asked the band for an interview, which they gladly did. If you want to know what Vipère is all about and want to know more about them, you should at least have a look at the interview. I think, if you like French black metal, you should have this band on your radar in the future! 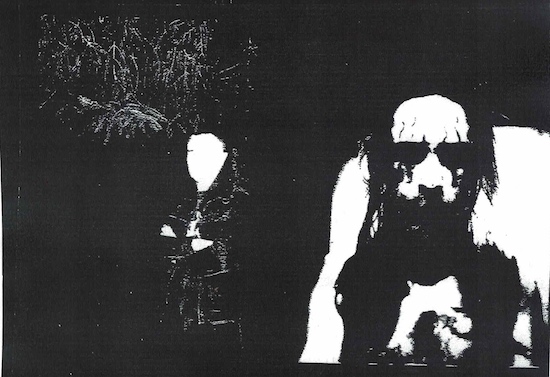 Hello together! How are you?

Saros: Hey. As good as possible and glad to be here to talk with you. Thanks for taking time for us.
Sans-Visage: Hi! I'm fine, happy to answer your questions!

You are a new black metal band, about which nothing is really known. Can you introduce yourselves to us in more detail?

Saros: Yes, we're new and it's a fact that there's almost nothing about us out there. For now, we are only responding to interviews. We don't want to expose ourselves if it's not desired. We both have a musical history in other genres but it's not important here. We just want to focus on Vipère, the label and our BM projects. The thing is we were just two guys worshipping black metal and it felt logical to play together. We rehearsed for about a year, and then threw out all our tries. After that it took only a few weeks to record Sombre Marche and to decide to release it as a digital EP first and then as a CD.

Your EP "Sombre Marche" is a pretty old-school black metal release. I feel like I'm back in the 90s in parts. Is that intentional?

Saros: Yes it is. We're bored by those bands with perfect sound, perfect compositions, perfect guitar tones… We wanted to do it the old-fashioned way. Everything has been made to make you feel in your garage. And it is not a posture, we didn't give ourselves the choice. There was an emergency that we couldn't stop. We wanted to sound raw and that's what we did. Of course, there's a lot of imperfections in the songs or in the recording process. Structures or arrangements might have been different if we had given ourselves time to look back. And so what? I think songs have souls. It's a picture of an instant. I like the way we've made it authentic. When I listen to early Enslaved I'm totally conquered by those raw intros and interludes. It talks to me. I like to think that first opus are often specials because they are made with sincerity and emergency… Last but not least, it's obvious that we are both into 90's BM. We truly like the BM history, myths and legends. The band's chronology along with the evolution of the genre is amazing to study. So, it was an evidence to us to evolve in that kind of ambiance. We hope that we're not just another copy. We tried to have our own atmosphere...

I think I can hear influences like Gaahlskagg or early Ulver in your songs. What are your biggest musical influences?

Saros: Wow thanks man! Early Darkthrone, Ulver of course. The voice of Attila Csihar. But also, stuff like Mortiis, Belenos or Panphage… You can ask me that same question one hundred times and you'll have as many different responses… And that's only for the BM part. I also have massive influences from the noise rock scene or some French singers for example.

Sans-Visage: Personally, I am not influenced by these bands. My biggest influences are Dissection, Mayhem, Black Flag and more recent bands like Grafvitnir, Valkyrja or Ifernach. But when we compose, we quickly forget our influences, we do not try to sound like a particular band.

Lyrically you are rather misanthropic. Do you have a certain message you want to bring to the people?

Saros: I hate that question haha. I'm not comfortable talking about my lyrics. They are very personal. But you're right, they are kind of misanthropic. It's all about depression, fear of others, aging and so on… There's a lot of things hidden behind metaphors or stylistic figures. It's a way to protect myself from the eye of the reader and trying to still say something. Saying this, I realize that's a fucked-up way of doing things. But it's the only way. I don't care about passing a message to people… They'll find what they want in my lyrics and I like to think they act as a mirror.

Where do your lyrical inspirations come from? More from everyday life or literature?

Saros: My life. I'm almost unable to write on anything else. But I'm working on it. For example, Sans-Visage is drawing new stuff and I'm trying to write a new poem for each of his drawings. But even so, there's still a bit of me sweating in the lyrics. I would like to write about other people's lives, but I have to learn to write in the third person. Your question is welcome, because I'm currently thinking about all of this…

You run a small label called Vetus Capra, on which Vipère and Vieille Chèvre are distributed, according to my information. Are there any further plans concerning your label?

Saros: There is and there is not haha. We take things as they come...

Sans-Visage: For the moment, we do not want the label to grow. Vetus Capra is, above all, a way to highlight our projects to Saros and me. The situation can change if you want to…

What is the situation in the French black metal underground? The bands that were underground 25 years ago and in a way also pioneers for today's bands (I'm thinking of Blut aus Nord or Deathspell Omega) are now in a way quite hip.

Saros: I have the feeling that French black metal is often seen as an avant-garde. Maybe it's true in a way but I'm not comfortable with this. Of course, bands like Blut Aus Nord are huge beasts but there's a bunch of followers that do more harm than good in the scene in my opinion. I prefer my black metal raw and obscure. And in a way it's kind of a hype too. Every release is a limited edition and then there are special editions, first press, second press in splatter with a bottle opener and so on… Hmm I digress… The French black metal scene is rich and complex of course and there's different levels to discover. The very underground with small labels like Transcendence for example and the big ones like Season of Mist.

But I guess it's the same in every country, no?

Sans-Visage: For my part, I don't know anyone from the black metal scene. And it is very well like that. I need this mysterious aura to appreciate this music, it inspires me a lot. Regarding the two bands you mention, I listened to them very little, so I won't be able to talk about them... Personally, underground or not, I especially like when the music sounds sincere, and I think it is still the case with these two examples ....

Did you already have the opportunity to perform gigs in your still quite young career? Are there any plans to play concerts when the pandemic is over? Or are you doing it more like Darkthrone and avoiding gigs?

Saros: No, never. In the first place we just wanted to create something concrete with a record. We were not really a band until we released the EP I think. So, we were not planning to perform gigs at all. I love playing live, but it is not planned at all for now. First we do not have a live lineup and we don't want to seek people to join us. Everything will come in time if it has to. It's still something that I have in mind. For Vieille Chèvre, it's almost impossible, it's kind of an experimental project. Everything should be reworked. Maybe it would be pleasant… Honestly I don't know…

Sans-Visage: To be honest, black metal is a style that I enjoy mostly alone, on record. I'm not closed of course, but I don't think I want to play our songs live. 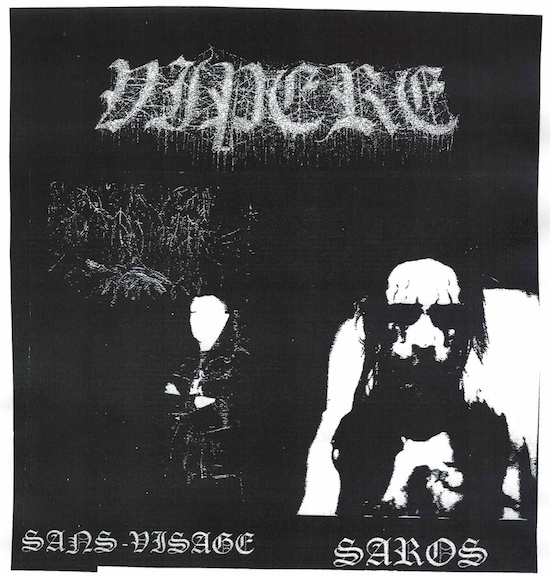 I want to come back to Vieille Chèvre. You are also involved there. What can you tell us about the band? Here you rather indulge in the classic French black metal à la Vlad Tepes, Torgeist or Belkètre.

Saros: As soon as I started listening to BM, I started experimenting with guitars and a mix of various instruments. Naturally I mixed up BM with my personal musical background which is noise rock oriented. Everything has been made in my bedroom without any plans in mind. Finally, I realized that all those rushes could be assembled. There was a natural coherency. It's not a 100% black metal project at all. The spirit is here but musically there is so much more. For example, I like ambient or repetitive music a lot and you can clearly hear this in the album. Of course, the 90's French black metal scene has a huge influence on me. The Black Legions are a reference musically as well as in terms of mindset. The homemade aspect is the key here. I'm also impressed by the work of Striborg. His musical independence is whole-hearted.

What about further release plans for Vipère? Sans-Visage has already let it be known that you have further plans for this year...

Saros: We just started to rehearse again. With the sanitary context it's not easy to find a way to meet up. But it has been very rich and productive. We're on our way to release something else for sure. We cannot say everything here but there will be some surprises I guess. Drawings, texts and music will be entangled in a new way compared to Sombre Marche. By the way we're very excited by our new project. There's a chance that you can hear something new by the end of the year!

Sans-Visage: We work quietly for the future, as long as we have the fire and ideas. We do not set a deadline, but yes we have already thought about our next mischief!

Which bands and/or releases can you recommend to us?

Saros: I did not follow the black metal news too much these last month's, so I do not have fresh stuff to give… I recently bought the last album of Nuit Noire. It's excellent, dark, and unique. It is a mix between BM, punk and cold wave I'd say… I have the last album of Isengard too. It's a bunch of unreleased songs from the 90's. I have not been disappointed. Oh yes! There is the first album of Warmoon Lord, really excellent. And of course, the last Paysage d'Hiver… I really like this one-man band. It talks to me so much. And last, go check Vargrav if you haven't heard of it yet...

Sans-Visage: If you are a fan of simple, efficient punk that makes you want to break everything, I recommend the Australian band Primitive Blast. Otherwise, I also recommend Ferriterium, a French melodic black metal band. I just got the last tape from Arbre, an experimental French black metal band. It's quite intimate but it's very good.

The last words of the interview belong to you!

Sans-Visage: Thanks for this interview, it's really nice to give us the floor on MetalBite as we are just getting started.