Malacoda will release their next EP "Crawling Chaos" in April (4/2/21, independently). "Crawling Chaos" is the band's first new release since 2018's "Restless Dreams" and is a return to the band's more cinematic and gothic roots as heard on "Ritualis Aeterna" (2016) as well as a deeper exploration of melodic vocal hooks as heard on their self-titled debut (2014). MetalBite talked to Lucas Di Mascio (vocals) about the new EP and things around it. 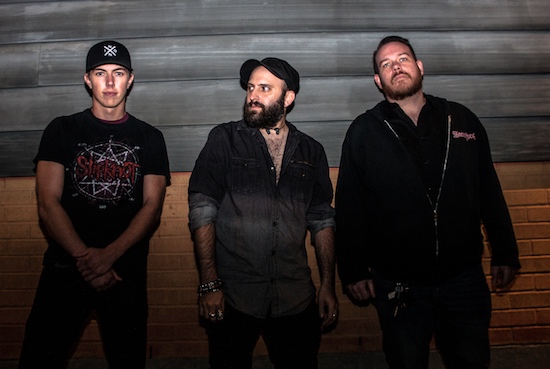 Thanks for taking time to do this, how are things in Malacoda camp right before the release of the new EP?

My pleasure. Things in the Malacoda camp are okay, it's a bit tough to get together due to the circumstances we're all in and it sucks not being able to play live to support the release, but at least we're all safe and healthy.

Name of the band came from Dante's Inferno, which is one of my favourite books and it's always been a constant source of inspiration for me. I think I wanted something that spoke more to the "dark yet majestic" vision I had for the band. Having a name inspired from a literary epic from Italian classic literature does that vision justice I'd say.

Let's talk about your newest EP, how long did you work on it and how was the whole process?

It took a long time if I'm being honest. I had written most of this material before the release of our previous album, Restless Dreams, was even done being mixed. So, I've been sitting on these songs since 2017-ish probably. Had a lineup change since that point and I wanted to have some of the new blood take part in it, so a lot of stuff we reworked and retracted in some cases. It wasn't exactly a fun process all the time, but I think it was worth it.

Can you tell us about the recording itself, and how satisfied are you with the outcome?

We worked a long time on it. Years on and off. It was just a big pain in the ass. We technically worked on 3 EP's at the same time. I still feel like we aren't done working on it in some ways. I'm relatively happy with the outcome. There's a lot I would have changed on how we worked on it, but I think it's a good sounding release.

A lot of big, melodic choruses and some meaty riffs. We really tried to work on a wall of sound with simpler song structures instead of overcomplicated riffs and sections like in our previous release.

What is the meaning behind the title?

Crawling Chaos was inspired by the HP Lovecraft story "Nyarlathotep". I had always wanted to do a Lovecraft themed song before. The main driving force in that story is known by many other names, one of which is the crawling chaos, and I just really liked the imagery that comes with that name.

I was honestly just really inspired to write at that point in time. I didn't really have a main inspiration at the time, just stuff was happening in my life and it just made me want to come up with cool music.

I don't actually listen to as much metal as most people would think. At least, not as much as I used to when I was younger. I listen to a lot of instrumental music like jazz fusion, ambient, etc. I'm really into goth rock and musical theater too. I think this time around I was really leaning into simple song structures, so it was a lot of rock and vocal focused music that I was trying to base my direction on.

Some guys out there like to put tags on bands and so you ended up with 'Gothic Metal'. What do you think about all this categorizing and putting tags on music?

We've been labeled as everything under the sun at this point. I think the most accurate representation of who we are is probably gothic metal- definitely symphonic metal depending on the album/song. I think categorizing music is okay, it's kind of helps to create umbrellas or hubs that similar bands can be put into so it's easy for people who are looking for a certain sound to find. But I also find that it can also turn people off from stuff that they might like because it's labelled as something they don't usually like. I think some tags are ridiculous too, there's a new subgenre made up every week it seems. For example, we've been labelled as Vampire Metal before and I have no idea what that is.

I'd consider us gothic metal, or gothic symphonic metal.

A bit of both. I'm always working on music as a producer and recording engineer, and I often get hired because of what I do as a musician. I find that if I'm not happy with a song, and if I have to make too many compromises, I'd rather scrap it and start over. I do want people to like my music however, so there are certain things I do- guidelines maybe, that help keep me on a focused path. I think song structure is key - a lot of metal bands just come up with a riff salad and it's just boring and sloppy sounding music at times. You can have interesting riffs, but if the song sucks and goes nowhere who cares? Give me a good melody and an interesting song - don't bore me with a 3-minute guitar wankfest.

I expect them to listen with an open mind and be honest about what they are listening to and the reasons why. If you're a thrash head, you'll most likely hate Malacoda. We aren't a thrash band. We've got maybe two songs that can be classified as thrash or death metal. Listen to us if you want to indulge escapism.

I think we play to build; we want to build relationships, grow our vision of the band and reach as many people as possible. I don't want to do something that would be detrimental to the hard work I've put into this.

I think I have plenty of ambition, maybe too much anxiety haha!

I don't know, maybe do something else in art? I like photography, I've been meaning to get better at that.

Where do you see yourself and the band in the next 5-7 years, is there a plan in motion?

Depending on how things go, I'd like us to be touring with some bigger acts, maybe open up for some bands we've looked up to for a bit. We had plans, but with what's been going on since 2020 a lot of shit hit the fan and we've had to recalibrate our trajectory so to speak.

We've got a few more EP's we'd like to release this year, I'm remixing, remastering - even rewriting in some cases, some older material to prepare for a re-release down the line. I'd like to get a cover song out this year too if we can, it's something we've never done before. We've always played around with covers in this band but never committed. I think we've finally found a song we'd really like to put out.

Nowadays most of the labels and bands release their new material on CD, vinyl and cassette. Vinyl is coming back some say but for me it never went away just like cassettes. What is your opinion about the physical media, which one do you prefer?

I think physical media is useless for music. The only thing I collect "physicals" of are Blu-Rays or DVD's just because my internet connection is crap and you have to get like 10 streaming services just to be able watch whatever you want, and even then it's not on there forever. I like a lot of B-Horror films and just artsy films, so they are hard to find digitally anyways. I have a TON of CD's and the last car I bought a few years ago didn't have a CD player, so I haven't listened to a CD since then. None of my computers even have a disc drive in them so I literally would have to see if I can dig up an old discman or something from when I was a kid to play a CD. It's all about streaming music these days. Everybody puts their shit up on Spotify or Apple Music anyways. We didn't do a physical release for this release, and we won't for the next few EP's because without shows I'm just sitting on a bunch of merch. We rarely get sales unless we play shows, and honestly, the last shows we did we barely sold CD's. It was all about the shirts, coffee we make, and whatever other item that wasn't a CD. I might want to do a limited-edition version of these EP's as a box set or something, but I don't know. There hasn't been much demand for CD's.

Thanks for having me, you can check us out at malacodametal.com and get our new music on our Bandcamp at malacoda.bandcamp.com - have a good day!