After "Crawling Chaos" in April and "Strain" in July Malacoda will release their new EP called "The Year Walk" beginning of December. Lucas Di Mascio found a bit of time to answer some questions about it but also some other things in between. Check it out yourselves and let everyone know to do so too. 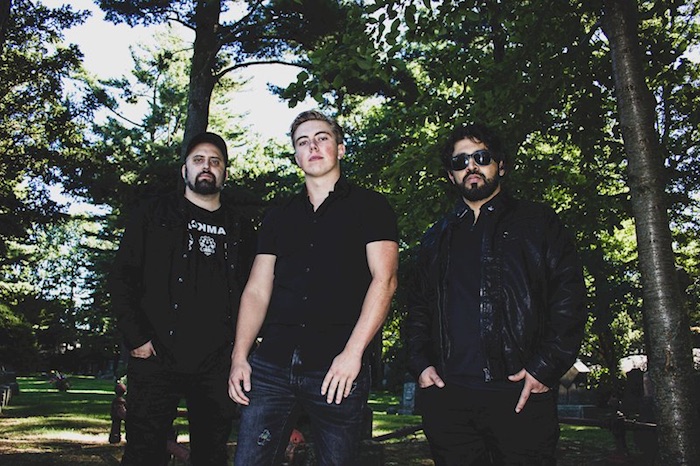 Thank you for finding time to do this interview, how are you?

Not bad at all, thanks for having me.

Before we get to talking about your new EP, I want to ask something first if you don't mind. What was the spark that got you into metal and how did it start?

I think the first "metal" band I ever heard was Van Halen. I think it was the 'Panama' music video on MTV when I was a little kid. I remember having my mind blown and thinking the guitar was such a cool instrument. After that I think my friends tried to get me into nu-metal when I was in high school, but I didn't really resonate with Slipknot or Mudvayne. When I heard Children Of Bodom I was hooked- I think that band probably put the idea in my head to start a band.

Aside from musical inspirations what is the biggest reason that pushes you to create your own sounds, what other aspects of life or art give you the strongest impulses to write music?

I think I'm inspired by all sorts of things. Literature, history, stuff in my life, vibes. I own a studio and I'm always working on something - I really enjoy the engineering and technical producing aspect of it. There have been times where I've heard a sound or an album and I'm just thinking "how did they do that?" And then I'm inspired to explore and discover new ways to make music.

Who is your all-time favorite musician that you've never met? What would you ask about if you had a chance to ask one question?

I've been lucky because I've met the majority of my favorite musicians over the years. Someone I haven't met that I'm a massive fan of is Chelsea Wolfe. If I could ask her any question it would probably be to give me some songwriting tips!

Ok then, let's talk about new music. Do you work on new songs collectively in practice room or is there a main composer taking care of all that happens?

It's been different for every record, but usually I take on the role of the main composer. The other guy's kind of come in and add their parts or tweak the ideas I have, and we just keep refining it from there.

How long did you work on the EP? Can you tell us more about it, about the recording itself, and how satisfied are you with the outcome?

The Year Walk was mostly written before our previous full length came out - Restless Dreams. So, I had probably started working on these songs since 2017-2018. They were supposed to be for another project that never happened, and Zak (bassist) and I thought it would be cool to rework them a bit for Malacoda. We had recorded and re-recorded a lot over the past few years- but the mix and master were handled by Jeramie Kling (Inhuman Conditon, Venom Inc.) and that turned out really good. I have mixed feelings about this release because of how long we've been sitting on it, but I'm happy that it's finally out.

I was wondering about the creation process. Was it easy and natural, did everything go as planned or did you struggle at some point?

It was pretty easy I felt. I wrote all these songs by myself over the span of 2 or 3 weeks. The drummers added their own flair to the track which really helped lift it up, but I think we struggled a lot late in the process. Just a lot of doubt and uncertainty about things regarding finalizing direction and tones.

In your opinion, which song is the best representation of the EP?

I think the best song on this EP is the one we named the EP with - 'The Year Walk'. I think that was the first song I wrote, and it's just got this really dark energy. I had to revisit some pretty dark moments to get this one out. It's got this really aggressive guitar riff and sinister energy about it but the vocal melodies are really haunting at the same time.

If you only had few sentences to convince someone to listen to the "The Year Walk", what would you say?

I would say that if you were someone who was looking for some more escapism in their life, away from all the bullshit of reality right now, then this EP - as well as the other two we've released this year, is probably just the thing you'd need.

Reading all different bits scattered on the internet about the band is hard not to notice the comparisons. Does it bother you, are you embracing it or trying to get away from any influences while composing?

Ever since we released our first song, we've gotten compared to bands that weren't anywhere near the realm of our influence. I don't really care who people compare us to, we just try to make good music that sounds like us.

Stefan Skjoedt is a killer artist I met online at the start of the pandemic. I used his artwork for my goth project Secondhand Depression. He had this piece up for a while and I really, really liked it. It was creepy, and not typical of a metal album cover. I had to buy it. To me, the lyrics and atmosphere of The Year Walk track are represented pretty well in the piece. It's about being haunted by something that may or may not be there, might not be based on the truth - but you can't really know unless you take the plunge and go on that journey to find out.

Could you tell us about the lyrics / concepts you focus on?

Again, each of our releases is a bit different, but on this release, we focus on a few different ideas. We have a really cool track on this release called 'Legacy' and that's inspired by classic gothic literature - ghost stories and Victorian gothic novels like Dracula, Northanger Abbey and stuff. That's actually a common theme for us now that I think about it - the gothic. Some of the songs on this EP are a bit more personal, but I try to write the lyrics in a way that anyone could insert themselves in them.

Are you following the world metal scene in any way at the moment? What do you like about it and what do you despise the most, what inspires you and what pisses off the most?

Yes and no. I try not to spend too much time online if I can help it. I think what pisses me off is the closed mindedness and the egos that are in the metal scenes. I can only listen to so many blast beats, growls, and static sounding guitars before I need a palette cleanser. Might be because I'm getting older, but I'm much more appreciative of production and dynamic songwriting these days. I don't want to listen to a 10-minute riff fest that goes nowhere anymore. I think I'm inspired by more of the fringe and eclectic metal artists out there- ones that aren't afraid to turn down the gain or maybe play with some off kilter instrumentation or vocal.

Check out this scenario. You meet investor with pockets full of money and he offers to pay for a video to one of the songs from new EP. Which song are you choosing and what's in the video?

I would probably choose 'The Year Walk'. I'd want some pretty gruesome and haunting imagery in it, that's for sure. Stuff that would stick with you for a while.

Here is another situation. You messed up badly and you are going to solitary for a long time. They let you take your 5 favorite albums from last 5 years with you. Which ones do you take and why?

My five favorite albums from the last five years in no particular order are "City Burials" by Katatonia, "Illusions Under The Sun" by Black Moon Mother, "Hiss Spun" by Chelsea Wolfe, "Hexed" by Children Of Bodom, and "Berdreyminn" by Solstafir. I'd take these because they are all pretty different from each other and they are all very textured and layered with their production. It would take me a long time to get bored of them.

Some people seem to prefer individual tracks rather than full albums. When you are listening to music do you listen to your favorite tracks or full album?

I love it when an album can hold my entire attention from beginning to end - honestly, I still buy vinyl records for that reason. But I can't deny how awesome making a playlist of just my favorite tracks are.

Not that you hear much of it probably but how do you handle criticism about your work, does it help; is it in the way; do you care?

Occasionally I do hear criticism about us, but I always look at where it's coming from. If some thrash dude is complaining we're too slow or we aren't brutal enough, then I don't really care - I'm not trying to please that guy. If people have critiques on our mixes, production, songwriting, I'll give it a listen if it's coming from someone who's a fan or a producer or something. Otherwise, I don't really care. I make music I want to hear and I'm super critical of myself as is - if you hear something weird or off with my music, trust me I hear it too and I'm already thinking about it and driving myself nuts.

Thanks for your time and good luck with everything.

Thanks for having me!