When I read that Grieving band members come from Mentor, Furia, Thaw, ARRM, Gruzja, Las Trumien, J. D. Overdrive and Pure Bedlam I never expected it to be doom. "Songs For The Weary" is one of the most intriguing doom releases I've heard in a while so I needed to find out some more about this doomsters from Poland. Wojciech Kałuża (vocals) was kind enough to deal with my questions and here we are. 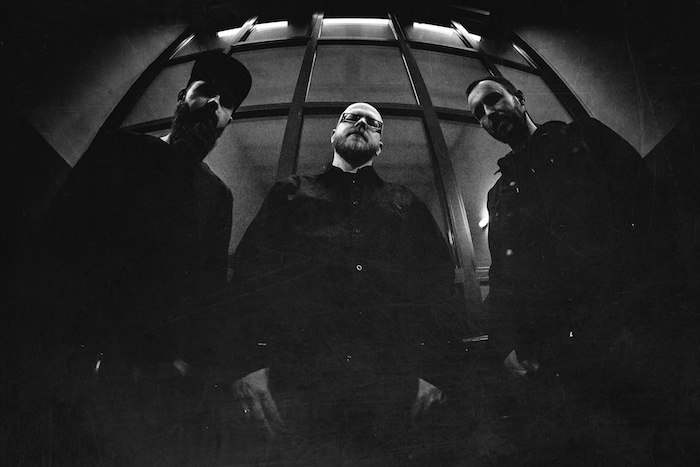 Thanks for taking time to do this, how is everyone doing?

We're doing great, really excited about our debut release Songs For The Weary and the awesome feedback we've getting so far.

Great album followed by great feedback (haha), how do you remember working on it, how long was the whole process?

Songs For The Weary were put on a shelf for a few years but once the pandemic hit, we got some extra time on our hands and decided this is the perfect moment to finally complete the album. Artur (guitars/bass/synths) is the sole composer so once we started working on the tracks it all came together very quickly. After the music was finished, I've started working on my vocals and lyrics. I think it took us less than six months to get everything done.

What about the recording itself, and how satisfied are you with the outcome?

As mentioned before, we managed to complete Songs For The Weary in about six months, however the recording process took just a few days for the instruments and another few for the vocals. We try to come prepared whenever we enter a studio, and this was no exception. We're really happy with the final product, especially since this is our debut album.

Who is your biggest inspiration?

Musically, you can't avoid mentioning Black Sabbath, as they've always been a huge inspiration for us, especially the first six albums with Ozzy. I'd also mention Candlemass, Cathedral, Trouble... I guess we wanted to capture the essence of that music and put in into our songs.

So that's musical inspiration, what about lyrical?

There's no particular "story" to be honest. Our guitarist likes short and sweet band names so when I came up with a few suggestions, he chose the shortest :) But we were trying to come up with something that would the atmosphere of the music and I think Grieving does the job pretty well.

The most important thing for us was that it matches our music. Grieving suggests something gloomy, dark and diabolical. And that's exactly what we're all about.

What about the title of the album?

Songs For The Weary might refer to humanity in general – in a sense we're all weary, tired travelers, lost in a world that is both beautiful and cruel. But we keep on going no matter what.

For those who haven't heard it yet, what can they expect from the new album?

It's classic doom with a modern twist to it we'd like to call our own. It's no secret we're all fans of old-school doom metal and we wanted to channel that fascination onto this album. But that doesn't mean we're doing everything "by the book" here. I think we have a few surprises up our sleeve.

Tags on music, what's your take?

I guess it does help in some extent. For me tags are sort of guidelines but over the years I've learned not to take them 100% seriously.

What does ‘doom' mean to you?

For me it's all about the atmosphere really. Dark, disturbing, yet melancholic. Like walking through an empty cemetery on a full moon. That's what I consider doom.

I think you should always create for yourself if you want to be 100% honest with your music. Of course, if other people want to tag along for the ride, that's great.

Do you play to build or to destroy, which emotions get you going?

Sometimes you need to destroy in order to build, so both really. I think I have a pretty good balance in my life right now and I wouldn't change a thing.

No particular plan. As long as we're still making and releasing new music, that's all the success we need. Right now, we're in the middle of forming a live line-up and hopefully by early 2022 we will be able to take Songs For The Weary to stages everywhere.

Labels and bands release their new material on CD, vinyl and cassette. Vinyl is coming back some say but for me it never went away just like cassettes. What is your opinion about the physical media, which one do you prefer?

I'm a collector myself so I'm all for physical media. I do own all formats, but I think that CD is by far the most practical one. It also helps when you have little room for new records anymore :) But having said that, a beautifully released vinyl can be tempting. Recently I bought Dopelord's "Reality Dagger" and the way this thing looks is just out of this world. I'm also pretty happy with how Songs For The Weary got released – the CD has a nice white tray on the jewel case while the vinyl is a beautiful white/clear color.

Thanks. Doom on and live your life to the fullest, after all you only get this one.