German thrashers Ravager have recently released their third full-length album "The Third Attack" (read review here). Up to this release it was a quite unknown band but with this album this may change because the band plays old-school thrash everybody who likes this style of music will probably love. I asked guitarist Dario Rosenberg about the writing process and production of the album and the background behind it. Have fun reading and support the band! 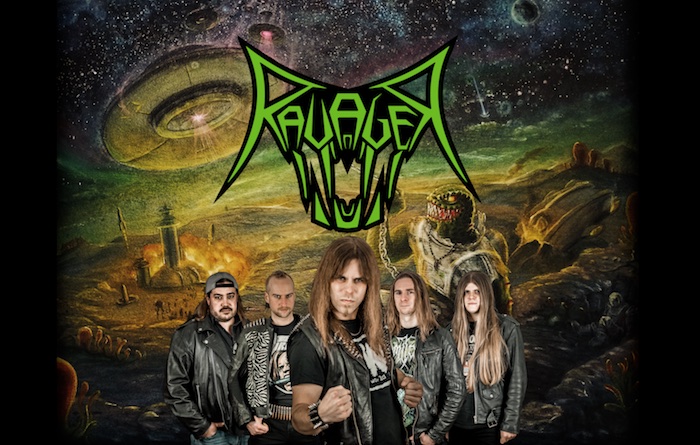 Hi Dario, how are you doing? I hope all is fine with you and the rest of the band.

Hi Michael, thank you, everything fine so far. Philip has some struggle with his wisdom teeth right now, though. But he will be back on top of his game soon.

This summer you have released your third album "The Third Attack". Did you choose the title because of that fact or is there another reason behind it?

The song 'The Third Attack' was written before we decided on an album title but in the end, we did not have to think about it for very long because that one did just fit. Nothing too fancy, easy to remember and somewhat cool sounding.

You got a lot of good responses for the release. Are you a little bit surprised about the feed-back?

During the process of creating an album the focus shifts away from the whole thing towards all those little struggles you have to overcome to finish the record. So, the result always is a little surprising when you finally can take a step back from your work and then take a first "real" listen. We are especially surprised about the super-positive feedback of many of the smaller magazines/websites. Many of them really took time to listen and put a lot of thought into it and into their reviews. Those guys rock!

How did it come that you recorded in the Soundlodge Studio? Did you know Jörg before? He is quite a busy guy!

Our friends in the meanwhile split-up band "Skulled" from Bremen recommended recording with Jörg after having recorded their album "Eat Thrash" with him. We then went to record Thrashletics at his studio and since we were very happy with the result, we returned for TTA. In my opinion the overall result is even better this time. Maybe because we did not tell Jörg what we wanted the sound to be like and just let him do his job :D

How did it work with him in the studio? Did you had a clear vision how the sound should be or did he influence you a lot?

For Thrashletics I think we had some examples of what we wanted our sound to be like but this time I cannot remember having any talk about that topic. A good sound engineer will work according to what is provided to him by the band I guess and this time it seems we did a good job of not talking Jörg into something and let him do his job (which we are very happy with by the way).

When you are writing a track, do you do it as a team or do you have one or two members that do most of the parts?

Most of the music is written by Marcel. He comes up with guitar-only versions of the songs and we then add all the other stuff to it at our rehearsals. During that process parts are changed, added, deleted – depending on what ideas we then come up with. Some songs are created in more of a group effort, though. For example, most of 'Planet Hate' and 'Destroyer' was written when André, Marcel and me spent most of the rehearsals as a three-piece during the months just before we hit the studio. Although we felt the pressure of having to have them done quickly, they turned out to be two of my favorites.

You have a lot of very old-school thrash tracks but in some cases, you also combine them with very melodic and catchy parts. In my review I said that your influences are clearly Exodus, Slayer, Onslaught, Judas Priest and Iron Maiden – am I right with that suggestion and which else would you mention?

With that suggestion you are pretty much on point! Although I personally do not like Slayer very much (apart from "Show No Mercy"), this kind of old-school thrash metal is what we originally agreed on wanting to play. With Marcel having something going with death metal and Philips and my passion being that classic heavy- and speed metal all those nuances may eventually find their way into our songs.

Lyrically you deal with social and religious criticism (as on 'Planet Hate' and 'Priest Of Torment'), personal struggle ('My Own Worst Enemy') but also partying ('Back In The Real World'). Having a look at the cover, I thought you would go more into Sci-Fi topics.

For the cover we wanted something matching the album title, but we did not plan on incorporating much of the lyrical themes of the album into it since they vary a lot and we did not write a concept album. So, we agreed on the cover telling another part of the story of that alien-lizard, which first appeared on our second record. A space-setting is always cool, and it fits the title-track.

Besides, are you Sci-Fi fans?

I kind of am but prefer future-mankind and dystopian settings or space horror movies over the really fantastical stuff. I guess it is similar for the other guys. None of us are Sci-Fi "Nerds".

Coming back to 'Back In The Real World' – is this and 'A Plague Is Born' your 'fuck off' Corona tracks? What were your experiences during the pandemic? Were you more resigned because you couldn't perform live or did you get more motivation to write more stuff?

They kind of turned out to be but the intention was a whole different one. 'Back In The Real World' is meant to tell about that "party is over"-feeling when you just got home from a show or festival and have to again deal with "real world" struggles. When Marcel wrote 'A Plague Is Born' there actually was no global pandemic yet. There was just some news about a virus "somewhere in Asia" which most likely triggered the idea of writing a song about a global pandemic. That it turned out the way it did was a sad coincidence.

In the start I mentioned Jörg Uken, which leads me to a broader question. He is playing in Temple Of Dread and Slaughterday and I could mention many more bands that originate from Lower Saxony. Is this the new hotspot for metal in Germany?

I do not know if there is still a hotspot for metal in Germany the way the Ruhrpott was in the 80s, and if there is it is probably still just there. Lower Saxony may have a couple of bands, but it is all very wide spread and there is not much of a scene here. It feels like further north (Hamburg for example) or way down south in Bavaria there is a lot more going on.

Your band lives in a quite remote spot of Lower Saxony. What else than visiting the bird park and the fun park" Heidepark Soltau" can you do there if you don't want to drive about 60km to Bremen or Hannover?

You can also visit the animal park "Serengetipark Hodenhagen". Jokes aside, you either have some hobbies and friends around here or leave. The fact that you are able to be in Bremen, Hannover or Hamburg in less than an hour is a big plus, though.

A lot of Corona restrictions will be cancelled in the next time so that concerts and other events will be possible again. Do you have any plans for touring or playing at festivals so far?

No dates set yet. Right now, we are practicing to be back on track to theoretically be able to hit the stage in late 2021/early 2022.

Finally, the last words belong to you!

Stay safe and healthy out there, see you soon!

Thank you very much for the interview!!!